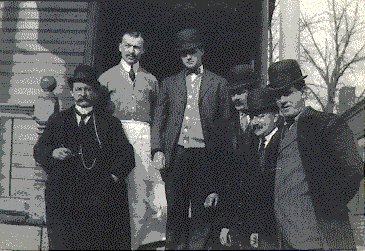 I am happy to send you copies of pictures from this years flag placement ceremony at the National Cemetery in Los Angeles. The ceremony took place on Saturday May 26, 2001 with 4,000 Girl and boy Scouts participating.

There are over 80,000 graves in the National Cemetery in Los Angeles, and following the opening ceremony, it took less than 30 minutes for each grave to have a flag placed in front of it. After the placing of the flag, each Scout stepped back and saluted the headstone, recognizing each veteran.

Following the placement of the flags, we met at the grave of James Sweeney (See map enclosed). I had previously researched the Battle of Cedar Creek and found where Mr. Sweeney earned the Medal of Honor.

Our boys knew of General Custer and were enthralled to learn that Mr. Sweeney was part of his command.

Following the dismissal of our units, I happened past Mr. Sweeney's grave, some 20 minutes later, and noticed another group of Parents and Cubs gathered around. I had the honor once again of telling the tale of Mr. Sweeney to this group of inter-city youth.

Thank you for your assistance. I should note that we also sent pictures to Mr. Sweeney's Great Grandson, James Gerien, of Santa Rosa, Ca.