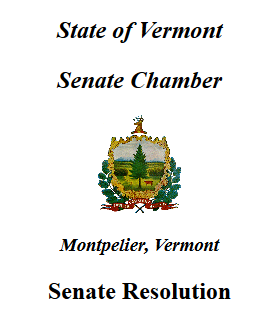 By Senators Doyle, Cummings and Scott,

Whereas, Harriet Hinkson Holmes, born in Worcester on July 28, 1843, was of 100 percent Algonquin lineage, and

Whereas, she resided her entire life in Washington County until her death in Northfield on August 5, 1945 at the age of 102, and

Whereas, with the outbreak of hostilities in 1861 between the Union and the rebellious states, the death of her infant son, and her husband's military enlistment, she volunteered to nurse wounded Vermont soldiers home from the field of battle, and

Whereas, for little, if any, compensation, she remained faithful to her nursing commitment until the hostilities ended in 1865, and

Whereas, Harriet was a proud member of the Montpelier Daughters of Union Veterans, and she is believed to have been the last living Vermonter who directly played a role in the state's gallant struggle to preserve the Union, and

Whereas, ever a humble person, Harriet never applied for a pension, and

Whereas, in 2001, her great-granddaughter Louise Blodgett, and her husband Floyd, discovered that Harriet had been denied a place in the family's lot at the Worcester Cemetery where her father Lyman and brother Calvin, both Civil War veterans, are buried, and

Whereas, they, further, learned that Harriet was laid to rest in an unmarked grave in the nearby lot of the family of one of her sons, and

Whereas, in an effort to correct a longstanding historic injustice, and as a commemoration of the dedicated public service which Harriet gave to her state and nation, on Saturday, April 27, 2002, a special ceremony will be held at the Worcester Cemetery, where a double marble stone memorial will be dedicated in her memory, and

Whereas, the pageantry accompanying this dedication will be magnificent, as the planned program is to include a Color Guard of members of the Sons of Union Veterans of the Civil War, and a speech that Professor Jay S. Hoar, the author of "Our Last Known Civil War Nurses", will deliver in Harriet's memory, now therefore be it

Resolved by the Senate:

That the Senate joins with the descendants and many others who will be in attendance at the Worcester dedication ceremony in memory of Harriet Hinkson Holmes in commemorating her exemplary contribution to Vermont's role in preserving the Union during the Civil War, and be it further

Resolved: That the Secretary of the Senate be directed to send a copy of this resolution to Louise and Floyd Blodgett.

PRESIDENT OF THE SENATE

Secretary of the Senate

Active Until Year Ago and Read Without Glasses

Montpelier, Aug. 7. - Mrs. Harriet M. Holmes , 102, widow of Clark Holmes, died at 11:30 last night at the Mator Memorial hospital in Northfield, where she had resided for the past three years,

Harriet Hinkson Holmes was born in Worcester July 28, 1843, a daughter of Lyman and Mary Jane (Ciley) Hinkson. For 84 years she had resided in Worcester and in her younger days became well known as an efficient domestic nurse.

Her marriage to Clark Holmes took place in Worcester and the couple had lived on a farm there for many years. He died in 1916.

Mrs. Holmes had belonged to the Worcester Methodist church for a great many years and as long as she lived there she had been active in the work of the church and its organizations. She was an honorary member of Union Veterans in Montpelier.

Up until a year ago Mrs. Holmes had been active and could read without the aid of glasses. She read a great deal and was always interested in current events. Adept at handiwork she had done a large amount of knitting, having knit several hundred pairs of mittens.

Seven children were born to Mr. and Mrs. Holmes, three of whom survive. They are Edgar Holmes, of Barre; William Holmes, 72, of Montpelier and Irving Holmes, 68, of West Berlin. Until three years ago Mrs. Holmes had made her home with her son Irving and then entered the Mayo Memorial hospital. Another son, Henry H. Holmes is deceased as are her three daughters, Mrs. Frank King, Mrs. Emma Parsons and Miss Delia Holmes.