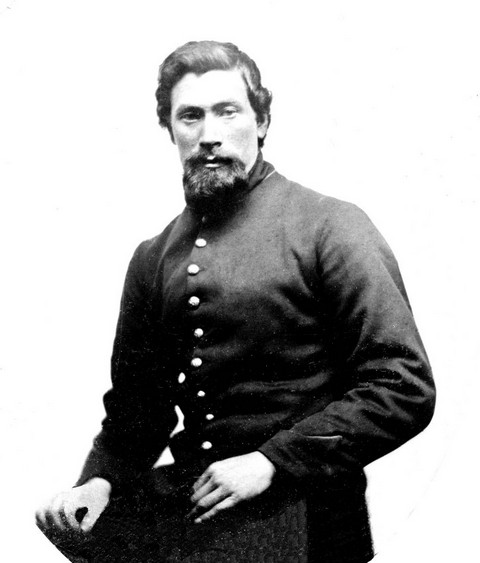 He grew up on the family farm located near Turner Hill in Duxbury. The 1850 US Census gives his name as Edward, and shows that he was in school. It was a very isolated location, and in 1853 the family sold the farm and moved to Fayston, where they lived for the next 3 years.

His mother died on February 18th, 1855, after along illness. That same year the family bought another farm on Turner Hill and returned to Duxbury. By 1860 Edwin was living and working as a laborer on the farm of David and Harriet Griffith in Duxbury, who were family relatives.

He enlisted for three years as a private in the Second Vermont Volunteer Infantry Regiment on May 7th, 1861 and was mustered in on June 20th of that year. In a letter one of his brother wrote, he said that " Edwin joined the Waterbury Co. and has been drilling 3 weeks - comes home every Sat night and stays over Sun. "

Three of his brothers also enlisted. His younger brother Charles Warrington Turner enlisted in Company B of the 8th Vermont in 1861 and died due to illness in New Orleans, Louisiana in July 1862. His older brother William Harrison Turner enlisted in Company H of the 15th Vermont Regiment in September 1862 and served until August 1863. Another older brother, Henry Augustus Turner, who had moved to Wisconsin, enlisted in September 1861 as a corporal in Company C of the 16th Wisconsin Infantry. He was wounded twice at the Battle of Shiloh and was given a medical discharge in August 1862.

Edwin wrote a number of letters to his family back in Vermont. At the first Battle of Bull Run, he wrote " we were encamped about 2 miles this side of Centerville and 10 miles this side Bulls run we were called up at 2 two O clock in the morning and marched on double quick half of the way to the battle field and came on all out of breath and fit for nothing. but stood well and fought well although the bulits flew like hail and struck many poor fellow to the earth I stood in the front

rank and near the right of our Company, but we could not stand the murderous fire that was poured in upon us from front and from the right wing".

He was wounded at Fredericksburg, Virginia on December 13th, 1862. He said that the minie ball hit "the inside of my leg and came out at my hip near my pants pocket inflicting a severe flesh wound". He returned Vermont and recuperated in Burlington that summer.

On September 1st , 1863 he transferred to the Veterans Reserve Corps, and spent the his remaining time in the service in Rutland, Vermont, Concord, New Hampshire and in Boston, Massachusetts. After his three year term of enlistment was completed, he was mustered out of the service on June 19th, 1864.

He returned to the area around Duxbury and Waitsfield, and on December 25th, 1864 he married Martha Griffith, who was a daughter of his father's third wife.

Edwin contracted tuberculosis and died on March 20th, 1867. On August 5th, 1867, a little over four months after his death, his only child, Edwin Morris Turner Jr. was born.

Edwin M. Turner is buried next to his brother Charles, in the South Duxbury Cemetery.