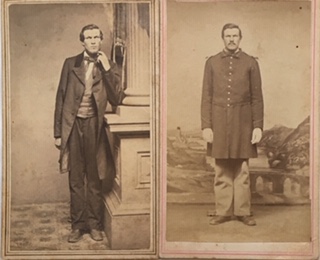 Harmon Vernal, of Fairfield st., died Wednesday evening January 16 in Jeffersonville where he was visiting his daughter, Mrs. J.A. Watkins. Had Mr. Vernal lived until January 18 he would have been 66 years old. Mrs. Ernest S. Brook of this town, another daughter, was about to start for Jeffersonville to pass Friday with her father in honor of his birthday anniversary when news of his death came. Mr. Vernal is survived by his wife, Lizzie (Foss) Vernal and the two daughters already mentioned.

The funeral of Harmon Vernal, of Fairfield st., who died Wednesday January 16 in Jeffersonville, where he was visiting his daughter, Mrs. J.A. Watkins, was held at the Methodist Episcopal church Saturday afternoon at 1:30 o’clock, the Rev. Dr. C.S. Nutter officiating. A quartet composed of Mrs. H.E. Scott, Miss Marion L. Collins, N.J. Hunt, and A.C.S. Beeman sang “peace, Perfect Peace,” and “Abide With Me.” The members of A.R. Hurlbut Post, No. 60, G.A.R., of which Mr. Vernal was a member, attended in a body. The bearers were L.T. Beeman, H.C. Pomeroy, C.C. Sunderland, and James Chynoweth. The burial was in the South Main street cemetery.