William W. Walker (8), third son of Zuriel Walker (7), was born August 6, 1831. He acquired an excellent education, graduating from Middlebury College in 1853. For four years afterwards he taught school in Palo Alto and Swansboro, North Carolina, and with such success that his future in that calling was assured, had he chosen to continue in it. But he had other purposes. The law had attracted his attention, and he went to Burlington, Vermont, where he took up a course of study, and was in due time admitted to the bar. He had but fairly entered upon practice, under most favorable auspices, when the Civil war began, and his patriotism impelled him to join the ranks of his countrymen and aid in the preservation of the Union. Enlisting in Company C. Twelfth Regiment, Vermont Volunteers, August 23, 1862, he served with that gallant command during its one year term of service, participating in all the campaigns of the Army of the Potomac during the most crucial periods of those dreadful years. On being mustered out of service he returned to Burlington and entered the employ of Van Sicklen & Walker, wholesale grocers, and was subsequently admitted to partnership in the firm. In 1877 he became a member of the new firm of O. J. Walker & Brothers, and remained with the house until 1896, when he retired from active business life. He was eminently successful during his entire mercantile career, and was a conspicuous representative of that class of business men which has contributed so greatly to the advancement of the material and social interests of the city. To those sterling, rugged virtues which characterize the best of the old stock of Vermont, he added that greater progressiveness which belonged peculiarly to his own day. In all the relations of life his name was the synonym for integrity and genial manhood, and he was beloved throughout the community for his nobility of character and his helpfulness to those in distress or less favored by fortune.

About 1853 Mr. Walker was married to Miss Charlotte Hogle, of Fort Covington, New York. Eight children were born of this marriage: Fred H., H. Henry, Charles, Weaker, Hiram, John, Hallie and Lillian, all of whom, with their mother, are now living. Mr. Walker died in 1899. The business established by O. J. Walker & Brothers was incorporated in 1899, and is now run in the interest of the estate. 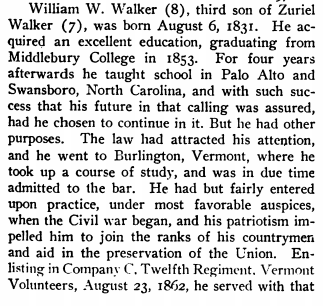 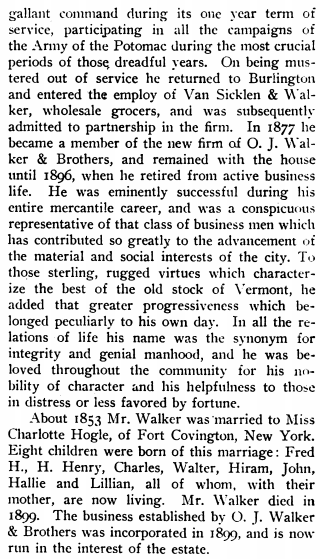 Genealogy and Family History of the State of Vermont, Hiram Carleton, Volume 2, Page 151

William W. Walker died at his home on South Union street at 3 o'clock yesterday afternoon of neuralgia of the heart. He had been in poor health for the past three years but was confined to the house only about a week.

Mr. Walker was born in Ferrisburgh, August 6, 1832, and was therefore 67 years of age. He graduated from Middlebury College in 1853 and for the next four years taught school in Palo Alto and Swansboro, N.C. He came to Burlington in 1867, studied law, was admitted to the bar and was a practicing attorney here when the war of the rebellion broke out. He enlisted in Company C, 12th Regiment Vt. Vols., Aug. 23, 1862 and was mustered out with the other members of the regiment July 14 of the following year. He then returned to Burlington and entered the employ of Van Sicklen & Walker, wholesale grocers. About two years later he married Miss Charlotte Hogie of Fort Covington, N.Y., and was admitted to membership in the firm. He became a member of a new firm of O. J. Walker & Bros., in 1877, continuing therein until 1896, since which time he has devoted his attention to the Citizen's Coal company.

Mr. Walker was one of Burlington's sterling business men whose integrity was never questioned and one whom no city can afford to lose. A widow and five children survive him, Fred 11, Hallie, Lillian, H. Henry and John. The funeral arrangements had not been completed last night.