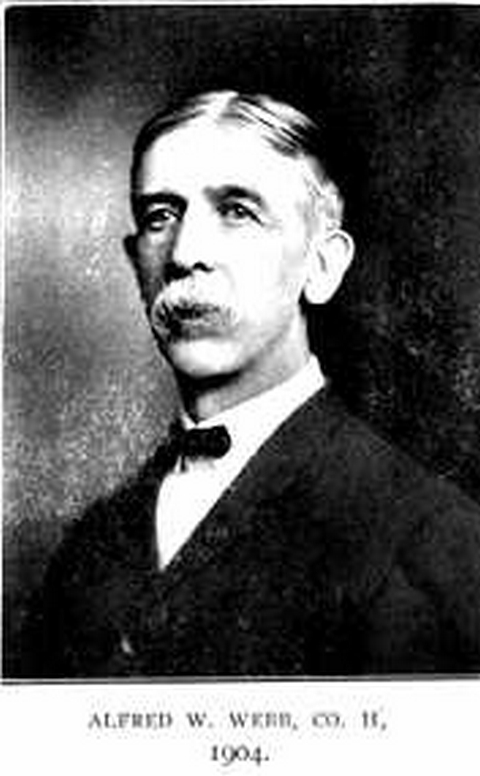 ALFRED WAINWRIGHT WEBB the second son and fourth child in a family of five, of Edward A. and Mary A. Webb, was born in Montpelier, Vt., December 19th, 1844. In 1847 the family moved to Northfield, Vt.. where tor a number of years the elder Mr. Webb was engaged in the stove and tinware business, but subsequently succeeded to the ownership and management of the Northfield House, which, in its day, was one of the finest hotels in Vermont. The subject of this sketch was educated in the public schools and academy of his adopted town. His only brother, Charles A. Webb, was enrolled and commissioned as 1st Lieutenant of Company F, 1st Reg't. Vt. Vol. Inf. (3 months)and served until the expiration of the term of service of said regiment. August 5th. 1861 he was enrolled Captain of the 13th Reg't. U. S. Inf., brevetted Major July 4th. 1863 for gallant and meritorious service in the siege of Vicksburg, transferred to the 22nd Infantry July, 1866, made full Major 16th U. S. Inf., 1880, and died at Fort McKavete, Texas, January 31, 1883.

Alfred W. Webb enlisted October 1, 1862. and was mustered into the service October 10th, 1862 as a private of Company H, in the 13th Reg't. Vt. Vol. Inf., but was at once detailed for special service in the medical department where he was retained until mustered out with the regiment July 21st, 1863. He removed with his family from Northfield to Chicago. Ill., in the fall of 1868, and in 1870 he entered the employ of the Chicago and North Western Railroad Company as clerk in the office located at Chicago. For the past twenty years he has been cashier, which office he now holds. By his ability, untiring industry and strict personal integrity he has acquired a handsome competence and lives in the enjoyment of his family and surroundings in his home at La Grange, Ill., a suburb of Chicago.

In 1878 he married Miss Josephine Morgan of which union there have been born two sons, Edward A. (1881) who resides in Battle Creek, Michigan, and Charles M. (1882) who resides with his parents in La Grange. Mr. Webb is an active member of Hiram McClintock Post No. 667 G. A. R., of La Grange, Ill., and has held the office of adjutant, junior vice-commander and commander; the duties of which he has at all times fulfilled with credit to himself and honor to the Post of which he is a worthy member. (See page 326 for pictures)