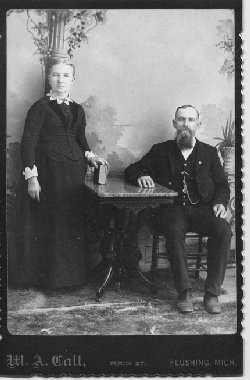 Muster rolls from October 1862 to February 1863 and January 1865 show him as sick. Records show him in the hospital on January 23, 1863 with "Rubeola". John was injuried at Cedar Creek, VA on November 2, 1864 when he was thrown from a horse. Hospital records show a contusion on the back and other injuries. He was taken to a field hospital in the Shenadoah Velley on November 8, 1864. Was sent to Winchester, VA Hospital on November 21, 1864. He was admitted to Philadelphia Summit Hospital on December 9, 1864.

John moved from Whittingham, Vermont to Genessee County, Michigan in 1868. John lived in Crawford County Michigan from 1898-1909. John died on September 13, 1914 in Flint, Michigan and is buried in Genessee County, Michigan. John was described as fair complexion with dark hair and blue eyes and 5 ft 5 inches in height. His occupation was listed as a farmer/butcher. John was the brother of Vermont Civil War soldiers Luman Wilcox and Zachariah Taylor Wilcox.