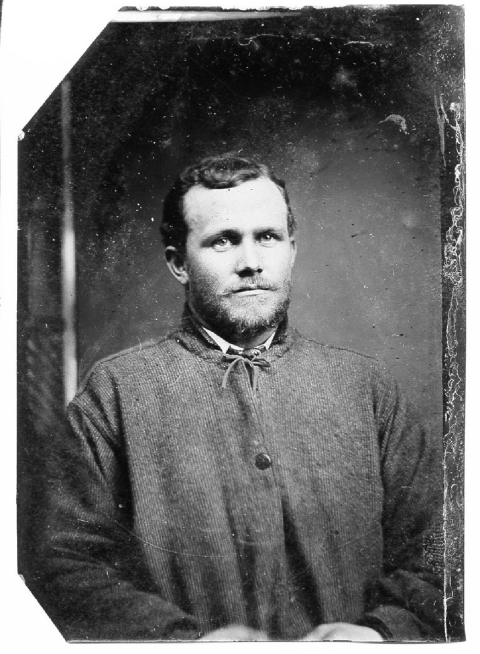 The Vermont Historical Society acquired the Civil War letters of James Wilson of East Warren in 2008. The letters offer insight into the Civil War experience of a private who left a small Vermont hamlet and who would never see his home state or true love again. (See also the Finding Aid for the letters).

Wilson enlisted in Company B of the 13th Vermont regiment in 1862 and wrote 53 letters home to his mother, sister Lucy, and friend Melville Eaton. Wilson died during the Battle of Gettysburg on Cemetery Ridge, July 3, 1863, just before Pickett charged toward the Union troops.

Wilson's first letter is sent from the camp at Brattleboro where the 13th Vermont assembled. "We are to be sworn in today and tomorrow. We are to bid adieu to the Green Hills of Vermont for nine months. Then we shall see home again. All I hope." Apparently losing weight, in November Wilson tells his family to "look on the sash by the showcase in Jim's store and see how much I weighed the night I enlisted." By February he writes to friend Melville at home urging him to avoid the draft and saying that he will not reenlist unless given a horse to ride.

On March 11, Wilson writes of the capture of the Second Vermont Brigade's commander: "The Rebs went in there last Sunday night and took General Stoughton prisoner - the Second Vermont Brigade don't care too much. I guess this regiment don't at any rate." The collection contains three letters to Wilson from home. His mother Rosalin writes him on June 28, 1863, "Hiram Jones has buried his other girl. She had diphtheria. Dr. Judkins is very sick -How anxious I am about you. If you can only come home safe and well."

In what is apparently his last letter home, Wilson writes that "we have to keep awake on guard as one neglect endangers the whole Brigade. I will write soon as I can to say goodbye." Soon the Second Vermont Brigade was on its way to Gettysburg. On the long march Wilson told a friend that he would never go home alive. The morning of July 3, 1863, the 13th Vermont Regiment, with the Brigade, was in battle line on Cemetery Ridge. Soon it would assault Pickett's Charge. But before the attack, Wilson was helping a painfully wounded comrade to the rear when an artillery shell exploded, sending a piece of shrapnel through his heart. Back home, his fiancé Delia Porter took the news of his death hard. She died within a few months. Wilson's body came home to East Warren, and is buried in the cemetery there, all that remains of the village.

The collection includes tintypes of both James and Delia. The letters make reference to many individuals living in Warren during that period.