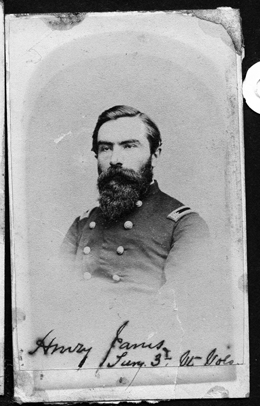 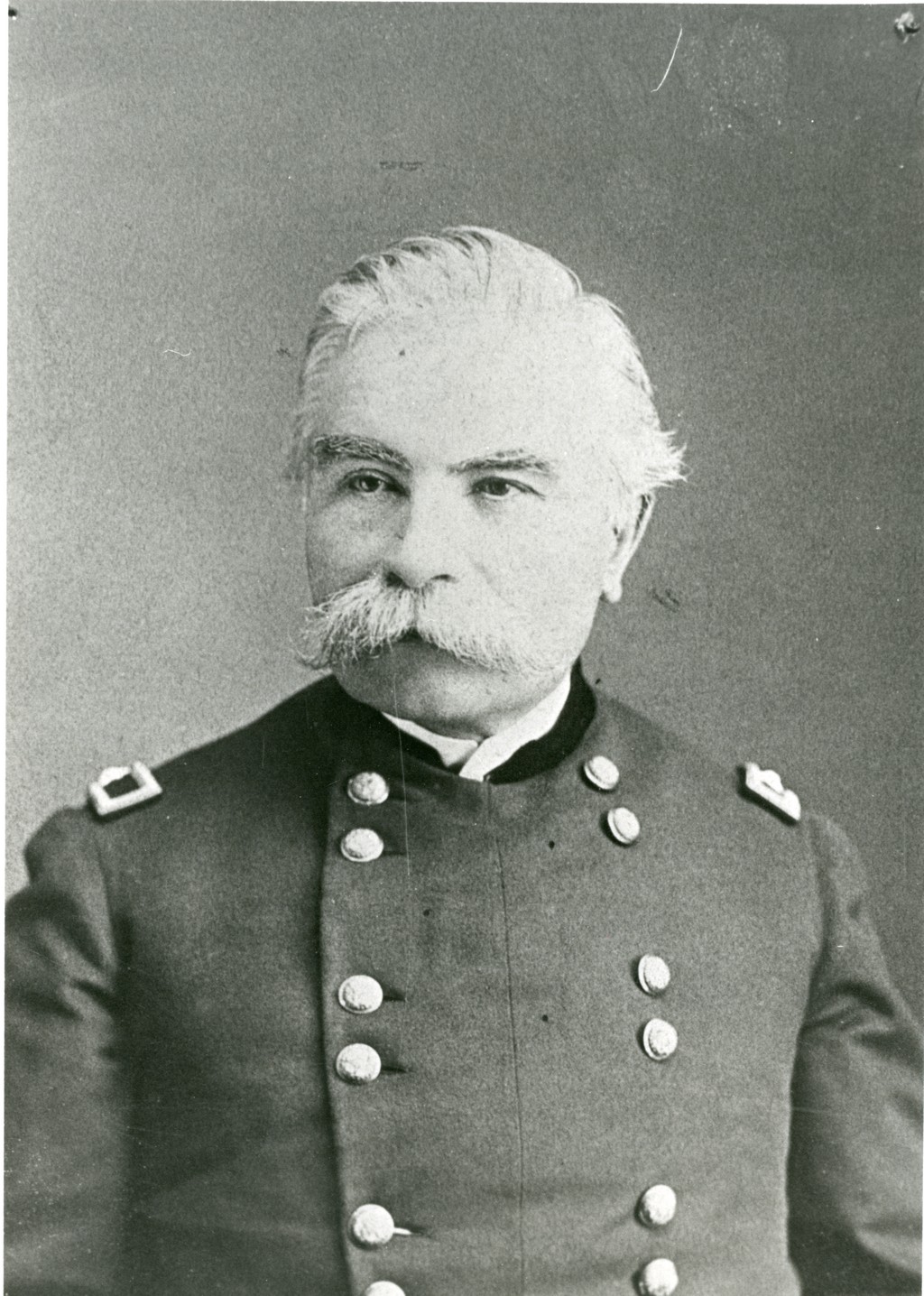 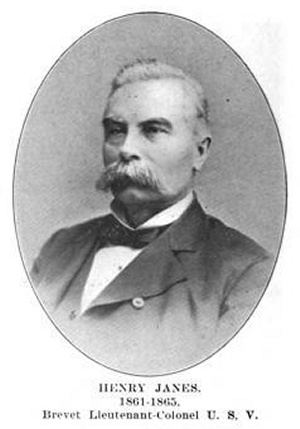 Served with the 3rd Vermont Infantry from the time of his muster in to U. S. service, 6/61, and participated in the battles in which it was engaged from that time until after the battle of South Mountain, Md., 9/62; was in charge of hospitals at Burkettsville, Md., and Frederick, Md., after the battles of South Mountain and Antietam, in the fall and early winter of 62; rejoined the 3rd Vt. 1/63; during the second battle of Fredericksburg, was in charge of the Second Division hospital of the VI Corps.

As an illustration of the efficiency of the ambulance service of the Army of the Potomac at that time so soon after its organization by Medical Director Letterman, and its establishment on an independent basis, it may be now stated that during the 48 hours including the time of the battle, owing to the changes of the position of the contending forces, it was necessary to move the hospital of the Second Division five items; the Rappahannock being twice crossed. After each removal, the hospital, operating, cooking and other tents were pitched, beds made up and everything put into regular running order. Notwithstanding this, all the wounded, five times as many as the whole number of the French wounded in Mexico in 64, were picked up from the line of battle by the Ambulance Corps and brought, under fire, into the hospital during the progress of the battle, their wounds were dressed, all operations were done with 24 hours, they were properly fed and furnished with comfortable beds, and surgeons and attendants were allowed several hours sleep. Thus, which was accomplished with only the regular detail usual during engagements, would have been impossible under the old system, or rather want of system so obstinately insisted and adhered to, against the protest of the Surg.-Gen. and other medical officers, by Gen.-in-Chief Halleck, in the early part of the war. A system by which the ambulances and other transportations given to the different regiment hospitals were taken for the use of headquarters messes, and could only be obtained for their legitimate uses, temporarily, if at all, by the medical officers, by correspondence through the circumlocution office; a system which disorganized and threw into confusion the line of battle during a fight, which impeded the movements of the army, and which was the cause of untold and entirely useless suffering. After the operations were completed in this hospital, Surgeon Janes went with a flag of truce into the confederate lines for the purposes of attending the wounded prisoners of the Sixth Corps, and bringing them back into the Union lines. After which, he was in charge of the Sixth Corps Hospital, containing 1,700 patients, at Potomac Creek, until it was closed and the army moved to Gettysburg.

During the battle of Gettysburg he was assigned to duty as Medical Director, First corps, a considerable part of the medical officers of that corps having been taken prisoners. After the close of the battle, was in charge of the hospitals in and about Gettysburg, in which were placed upwards of 20,000 wounded Union and Confederate soldiers left on the field. The care of the government for its wounded soldiers, the unimportance of the various volunteer relief societies, the magnitude of our operations and the obstinacy with which the two parties contended, may be inferred by these facts: During the progress of the battle, lest there should be some deficiency, Surgeon Janes, by the direction of Medical Director Letterman, distributed to the different hospitals, 30,000 rations in excess of their requisitions and regular supplies. The wounded left on this one battlefield were more than six times as many as the German's had during the Schleswig-Holstein war of 64, and twice as many as the English had during the Crimean war of 1854-57; this, notwithstanding the fact that in the early part of the battle, a large part of the Confederate wounded were sent to the rear.

A special hospital of about 2,000 beds was established on this field for the purpose of treating to termination the most dangerously wounded, especially those with gunshot fractures of the thigh, for the purpose of contrasting on a large scale the results of conversation and amputation under similar circumstances. In this hospital 495 cases of gunshot fracture of the lower extremities were treated conservatively, side by side with 449 amputations of the lower extremities. it is believed that never before or since have an equal number of injuries of this class been treated conservatively, and at the same time in only hospital, with better results.

Surgeon Janes remained in charge of the hospitals in and about Gettysburg until early in the winter of 1863, when they were broken up.

In the winter and spring of 64, he was in charge of South USA Gen. Hospital, Philadelphia. On the opening of the campaign of 1864, he was returned to duty in the field with the Army of the Potomac, at his own request. During the summer and fall of 1864, he commanded the hospital steamer "State of Maine, " in which many thousands of sick and wounded men were taken from the front to the general hospitals at Washington, Alexandria, Baltimore, Philadelphia, New York, etc.

In the fall of 1864, at the solicitation of Gov. J. Gregory Smith, he was assigned to duty in charge of Sloan U. S. General Hospital, at Montpelier, Vt., where he remained until the close of the war. His last duty was disposing of the government property at the General Hospital at Brattleboro, Vt. In all, between 49,000 and 50,000 men were treated during the war, in hospitals under his charge - one-tenth less than the total number of Germans wounded in the bloody Franco-Prussian war of 70-71. Appt. Surgeon General. of Vermont, with range of Brigadier General, in 1888, serving two years.

Dr. Henry Janes, son of Henry F. and Fanny (Butler) Janes, was born in Waterbury, January 24, 1832. The following sketch was condensed by Hon. Edwin F. Palmer from biographies of the members of the "Rocky Mountain Medical association," published at Washington, D. C, in 1877:— The Doctor received his education at Morrisville and at St. Johnsbury academies. His medical studies were commenced in 1852, at Waterbury, under Dr. J. B. Woodard. He attended his first course of medical lectures at Woodstock College, in 1852, and two courses subsequently at the College of Physicians and Surgeons in New York, where he graduated in 1855, and was appointed assistant and afterwards house physician in Bellevue hospital, New York city. In 1856 he went into practice at Chelsea, Mass., and in 1857 returned to Waterbury, where he soon acquired a good professional business. In 1861 he entered the army as surgeon of the 3d Vt. Regt., in 1863 was commissioned surgeon of the U. S. army, and in 1865 was brevetted lieutenant. The greater part of his military service was spent in hospital duty. In the fall of 1862 he was in charge of a hospital at Burkettsville; in 1863, in the winter, at Frederick, Md.; in the spring in the hospitals of the 6th Army Corps, and in the summer and fall in the army hospitals in and about Gettysburg, and at the Letterman general hospital, in which were about 2,000 severely wounded from the Gettysburg battlefield. In the winter and spring of 1864 he was in South Street general hospital, at Philadelphia, and in the summer of the same year was in charge of a hospital steamer. From the fall of 1864 till the close of the war he was in charge of Sloan general hospital, at Montpelier. He left the army in 1866, and spent a portion of that year in New York, making a special study of injuries to the bones and brain. In 1867 he returned to Waterbury, where he has since been actively engaged in practice, with the exception of a portion of 1874, when he was traveling in Europe. His practice is large in the treatment of nervous diseases, surgery, and in consultations with neighboring physicians. In 1869and '70 he published, in the "Transactions of Vermont Medical society," a paper on the treatment of gun-shot fractures, especially of the femur; in 1871, '72, and '73 papers on some of the incidents following amputations; in 1874 amputations at the knee-joint; in 1877 a paper on spinal hemiplegia. At the 9th International Congress held at Washington, D. C., Dr. Janes read two papers, one on non-fatal penetrating gunshot wounds of the abdomen, treated without laparotomy, and the other, gun-shot fractures of the femur, giving the results of treatment of 427 cases, and also 263 cases treated conservatively—a larger number than has been treated by any other living person. In 1880 Dr. Janes was elected by the unanimous vote of the legislature a trustee of the University of Vermont, and he is also one of the medical committee of the Mary Fletcher hospital, at Burlington.

Doctor Janes was graduated from the College of Physicians and Surgeons in the city of New York in 1855. On the outbreak of the Civil W ar he was appointed Surgeon of the Third Regiment Vermont Infantry, which was mustered into the United States service July 16. 1861. On March 26, 1863, he was promoted to Surgeon U. S. V., and on March 13, 1865, lie was made Brevet Lieutenant Colonel, U. S. V.. for faithful and meritorious service, and was mustered out of the United States Service, January 4. 1866. During his service he was in charge of hospitals at Burkettsville and Frederick, Md.; during the second battle of Fredericksburg he was in charge of the hospital of the Second Division, Sixth Corps; after the battle of Gettysburg he was in charge of the hospitals in and about that city until the winter of 1863, when he was placed in charge of the South U. S. Army General Hospital. Philadelphia. On the opening of the 1864 campaign at his own request he was returned to duty in the field with the Army of the Potomac and during the summer and fall of that year he was in command of the hispital steamer State of Maine. At the solicitation of Governor Smith he was then assigned to duty in charge of the Sloan U. S. General Hospital. Montpelier, Vt, where he remained until the close of the war.

General Janes was a Fellow of the American Medical Association and a member of the Vermont State Medical Society. He was appointed Surgeon General of Vermont wih the rank of Brigadier General, and served in this capacity for two years.