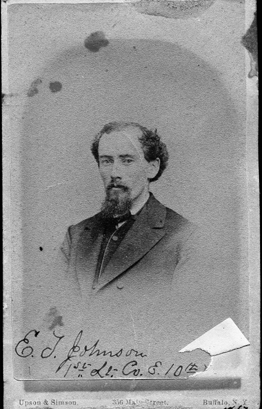 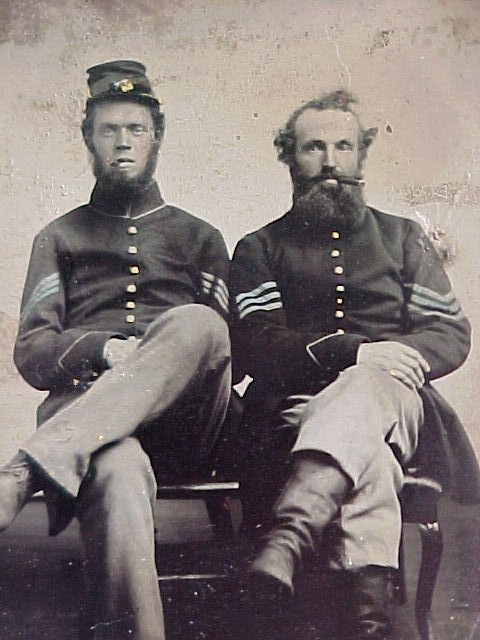 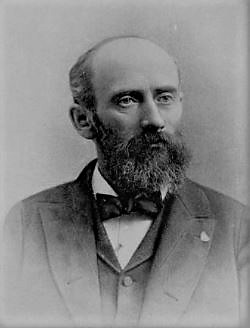 Ezekiel Thomas Johnson, born May 19, 1839, before he became of age entered the officer of the Windsor Journal (Vt.), where he became an accomplished printer, and worked at that business till the breaking out of the war of the Rebellion, when he enlisted as a private, August 6, 1862, in Company H of the Tenth Vermont Regiment, at the age of twenty-three years. While in command of a portion of the skirmish line, in the battle of Monocacy, Maryland, July 9, 1864, he was severely wounded by a minnie ball, which struck the top of his head, cutting through the flesh to the bone as it passed on. He was sent to a hospital, where he remained for several months; and as soon as able returned to his regiment, was commissioned Second Lieutenant of Company E, and the next years, March 22, 1865, was promoted to the rank of First Lieutenant of Company G. Amide many perils and hardships, he served his country bravely, and persevered till the war was successfully terminated. Was honorably mustered out of the service, June 22, 1865. He then went to Buffalo and acquired a knowledge of book-keeping, at the Commercial College there, and is at this date book-keeper for a firm of ship-builders. He married Sophia Louise Bailey, of Newbury, Vt., who died at Buffalo, May 17, 1870, at the age of twenty-six years.