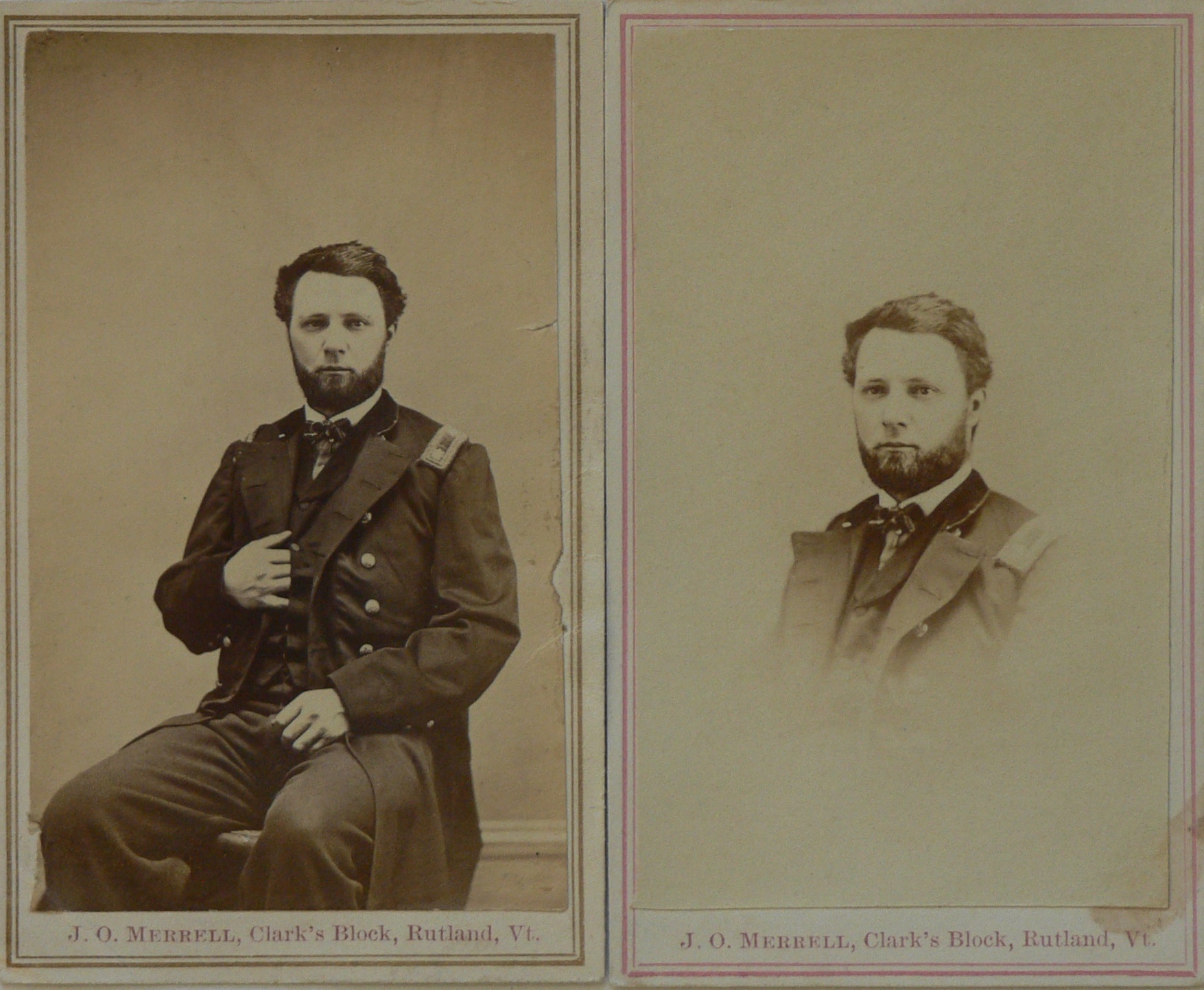 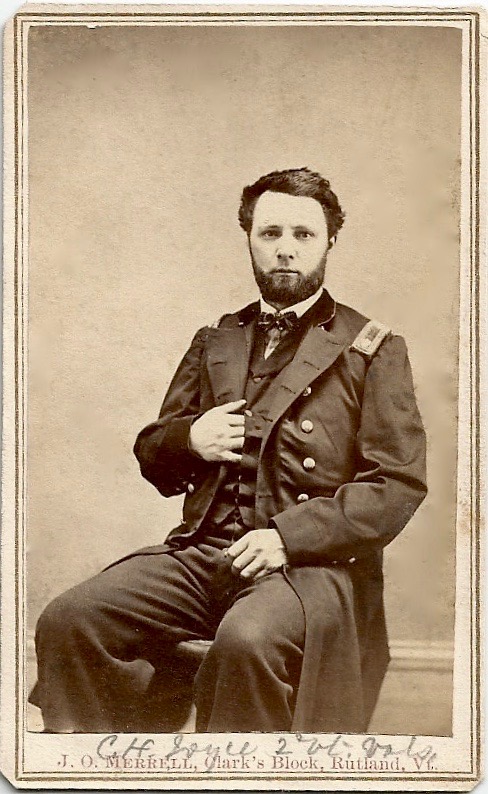 He came to this country with his parents in 1836, and settled in Waitsfield. He worked on a farm and attended the district school, winters, until he was eighteen years old, when he left the farm and completed his education at the Waitsfield and Northfield Academies and at Newbury Seminary.

He was a page in the Vermont House of Representatives three sessions, assistant librarian one year, and librarian one year. He taught school several terms, at the same time pursuing his legal studies under Hon. F. F. Merrill of Montpelier, and the late Col. F. V. Randall of Northfield. He was admitted to the bar of Washington county at the September term, 1852, and commenced the practice of law at Northfield in December, 1855. In September, 1856, he was elected state's attorney of Washington county, and re-elected in 1857. During the last year of service as state's attorney he greatly distinguished himself in the prosecution and conviction of one Ariel Martin, for the murder of two men in Calais. Hon. James Barrett presided at the trial and Martin was defended by Paul Dillingham and Luther L. Durant.

In June, 1861, he was appointed by Gov. Erastus Fairbanks major of the 2nd Regt. Vt. Vols. Infantry, the first three years' regiment to leave the state, and in June following he was promoted by Governor Holbrook to lieutenant-colonel in the same regiment. He fought gallantly with his regiment in the first battle of Bull Run; at Lees Mills; at Williamsburgh; at Golden's Farm; at Savage Station; at White Oak Swamp; at the second Bull Run; and at Fredericksburg. In several of these battles he was specially mentioned by his superior officers for gallant conduct upon the field. In January, 1863, he was compelled to resign his commission on account of a severe disability contracted during the campaign of 1861.

On his retirement from the army Colonel Joyce removed to Rutland and resumed the practice of his profession. At the March term, 1869, of the Rutland county court, the case of State against Ziba, Fred and Horace Plumley for the murder of one John Gilman was tried; Colonel Joyce had charge of the defence, and his argument for the respondents attracted wide attention and placed him at once in the front rank of jury advocates in this state. In 1874 he was engaged to assist the state's attorney in the prosecution of John P. Fair for the murder of one Anne Frieze at Rutland under the most horrible circumstances. The case attracted wide attention and it was said by the daily press of the day that Colonel Joyce's closing argument was a masterly effort and highly appreciated by the bar and the vast audience present at the trial. But probably the greatest effort ever made by him and the most splendid victory he ever achieved at the bar, was in the celebrated case of Calvin S. Inman of Poultney, tried for the shooting of Patrick Sennott, at the September term of Rutland county court, 1889, and acquitted. The colonel made the closing argument for the defence and during its delivery the large court room was packed with people from all parts of the county. A death-like stillness was preserved by the vast audience until he closed, when the deep murmur of applause showed the effect produced by the fiery and eloquent words of the advocate. The Rutland Daily Herald speaking of the argument said: "Colonel Joyce was eloquent and impressive. It was the effort of his life. He was inspiring; he was pathetic; and with the magical witchery of a silver tongue he painted a portrait so touching, so saddening that at times there was scarcely a dry eye in the audience. Again in characterizing the affray, and that which led up to it, he gave full reign to his terrible power of denunciation."

In 1869 he was elected a member of the state House of Representatives from the town of Rutland, and in 1870 was again elected for two years, during which time he was speaker of the House. In 1874 he was elected to Congress from the first congressional district, and re-elected in 1876, 1878 and 1880. Colonel Joyce took an active part during his eight years service in the national House of Representatives, in the discussion of most of the important questions which came before Congress. In 1876 he made speeches on the death of Vice-President Wilson; on the presentation of the statue of Ethan Allen; on early resumption of specific payments; on the centennial celebration of the American independence; in 1878 on the repeal of the resumption act and the remonetization of silver; on the election of President and Vice-President; on the tariff; on an amendment to the Mexican war pension bill, to exclude rebels from the pension roll; in 1879, on the policy of the Democrats in forcing an extra session of Congress by failing to pass the regular appropriation bills; in 1880, on commercial reciprocity between this country and Canada; on the alcoholic liquor tariff; and in 1882, on Chinese immigration; on the apportionment of representatives to the national Congress; and on the policy of the government in relation to pensions. Many of these speeches attracted the attention not only of the people of Vermont, but of the whole country and were widely circulated.

In politics Colonel Joyce has always been an earnest, thorough-going Republican, and has in every presidential campaign since 1852 done effective work upon the stump for his party, not only in Vermont, but in New Hampshire, Connecticut, Indiana and New York.

He has long been ranked among the leading platform orators in the country; a fine voice, an earnest, impressive manner, a thorough knowledge of his subject, and a firm conviction of the truth of what he utters, are among the elements which make him one of the most eloquent and effective speakers before a popular audience in this country.

During all the years of his busy and laborious life, in his profession and in Congress, he has found time to respond to all the numerous calls made upon him for the 4th of July orations, addresses at agricultural fairs, Memorial Day addresses, and lectures upon a great variety of subjects. He has always been a close and thorough student and a keen and interested observer of men and things. His favorite books outside of the law, are the Bible, Shakespeare, Milton, Bunyan's Pilgrim's Progress, Scott's works and Dickens' while history, biography, political economy and general literature make up the catalogue. The esteem in which Colonel Joyce has always been held by the people of his adopted state is fully shown by the positions of trust and honor to which they have so often called him.

He was married, Feb. 21, 1853, to Rouene Morris, daughter of Gurdon and Laura (Scott) Randall, of Northfield. Of this union there are now living one son and one daughter. The son, Charles Pitt F., graduated at Princeton in 1887 and at Dartmouth Medical College in 1892. The daughter, Inez Rouene (educated at Tilden Seminary, Lebanon, N. H., and Temple Grove, Saratoga, N. Y.), was married, March, 1877, at Washington, D. C., to Theron C. Crawford of Michigan.

Note: A picture of this soldier is available in the Charles Collection.