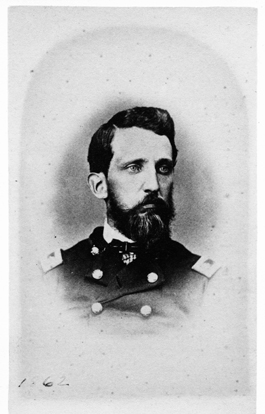 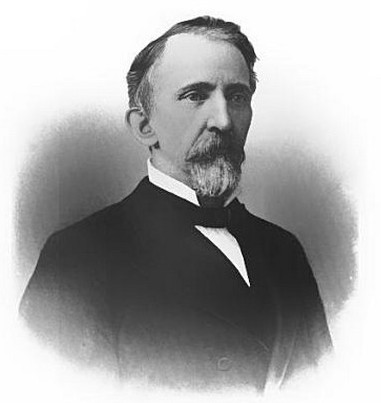 Barstow, John L., of Shelburne, son of Heman and Lorain (Lyon) Barstow, was born in Shelburne, Feb. 21, 1832. His parents were of English descent, and several of his ancestors served in the colonial and Revolutionary wars.

He received his education in the schools of his native town, and began to teach in the district school at the age of fifteen. He went West at an early age and was engaged in active business in Detroit, but in 1857 returned to Shelburne and began farming, assuming the charge of his aged parents. In the fall of 1861, while serving as assistant clerk in the House of Representatives at Montpelier, he was appointed on the non-commissioned staff of the 8th Regt. Vt. Vols., and was afterwards successively promoted to the rank of adjutant, captain, and major, and was honorably discharged at the expiration of his term of service June 22, 1864. He entered the service with robust health and vigorous constitution, but nearly three years of arduous service in the swamps and miasmatic climate of Louisiana shattered both, and for many years malarial diseases deterred him from entering upon any active business pursuit. When he was made major, the rank and file of his old company presented him with a beautiful sword, and when he left the regiment, the men who were mustered out with him presented him with another still more elegant. These two memorial gifts are justly preserved with great pride as evincing the regard of the enlisted men after they had served with him in the field.

The historian of his regiment says: "When, after the bloody fight of June 14, 1863, in front of Port Hudson, General Banks called for volunteers to head a storming column for a final attack, Captain Barstow was one of the brave men who stepped forward to form the forlorn hope." He was acting adjutant general under Generals Thomas and Weitzel; participated in all the engagements in which his regiment took part; was complimented for eminent service in the field, for gallantry in the assault on Port Hudson, and honorably mentioned for his personal services. He had hardly reached home after leaving the army before he was called into state service by the offer of a responsible position in the recruiting service by Adjutant General Washburn, which office he was obliged to decline on account of shattered health. In September, 1864, he was elected a member of the Legislature, and it was during this session that the Saint Albans raid occurred. At the request of General Washburn, Major Barstow immediately repaired to the scene of action and was sent into Canada on a special mission, subsequently was made commander of one of the brigades of militia raised by the state in consequence of that daring raid. He was placed in command of the forces on the northwestern frontier of the state, and remained on duty until relieved by George Stannard in January, 1865. In September of that same year he was again elected to the Legislature by the unanimous vote of his town, and in the years 1866 and 1867 he was elected senator from Chittenden County. In 1870 he was appointed by President Grant to the office of U. S. pension agent at Burlington which he held for nearly eight years. He at once set about reforms that were of great benefit to the needy pensioner, and so discharged the duties of the office as to call from Hon. Carl Schurz, then secretary of the interior, an autograph letter of thanks. In 1879 Governor Proctor appointed him state commissioner for the centennial celebration of the surrender of Cornwallis at Yorktown, and he rendered effective service in securing government aid for the undertaking, and for the monument, and in the arrangements for the celebration.

In 1880 he was elected Lieutenant-Governor for the biennial term, and in 1882 was elected Governor, the nominations to each office having been made by the unanimous vote of the respective conventions. He was the first Governor of Vermont to call the attention of the law-making power to the alleged discriminating and excessive rates of freight by transportation companies, and urged the creation of an effective railroad commission.

Colonel Carpenter, in his history of the 8th regiment, says: "The Ely riots occurred during Governor Barstow's term of office, and his course in requiring that justice should precede force, and that the riotous miners be paid their honest dues, attracted much favorable comment throughout the country."

The resolution of the Legislature of 1884, requesting the Vermont delegation in Congress to use their best efforts to secure the passage of the interstate commerce law, was passed in pursuance of Governor Barstow's recommendation. At the close of his administration the Rutland Herald gave utterance to the general opinion of his constituents when it declared that "he had been as careful, independent, able and efficient a ruler as Vermont had enjoyed for twenty years."

The above sketch might be largely extended, as he has held many other appointments of trust and honor, such as president of the Officers' Reunion Society; trustee of the University of Vermont and State Agricultural College; trustee of the Burlington Savings Bank; commissioner to fix and purchase a site for the Bennington battle monument, etc., etc. In 1891 he was appointed by President Harrison to serve on a commission with Gen. A. McD. McCook, U. S. A., to treat with the Navajoe Indians, and the work was brought to a successful and satisfactory conclusion. He was also disbursing officer of the commission, and to the astonishment of the treasury officers, returned nearly one-half of the appropriation for expenses. In 1893 at the request of Governor Fuller he has acted with the executive committee of the national anti-trust society. In regard to these elective offices it can be stated, as was said by Ashael Peck when he was elected Governor, "Neither solicitation nor hint of ambition for this dignity ever emanated from him." Governor Barstow never directly nor indirectly solicited the vote or influence of any man for any elective office.

He is, in religious preference, an Episcopalian, and has been a Mason since 1853; he is also a member of the Grand Army and Loyal Legion.

EX-GOV. BARSTOW
DEAD AT THE AGE
OF 81 YEARS

Had Long Career in Service of
State and Nation

Shelburne, June 29 - John L. Barstow, a gallant soldier in the Civil war, former governor of Vermont and long prominent in the affairs of his native state, died at his home in this town early Saturday morning of arteriosclerosis at the age of 81 years and four months. He had been seriously ill for two weeks and unconscious much of the time for a week previous to his death.

After retiring from the office of United States pension agent in Burlington in 1878, Gov. Barstow removed to the farm in Shelburne where he was born and where he had since made his home.

John Lester Barstow was born in Shelburne Feb. 21, 1832, the son of Heman and Loraine (Lyon) Barstow. He was educated in the public schools and began to teach in the district schools at the age of 15 years. He received the degree of LL. D. from Norwich University in 1909.

In 1858 Mr. Barstow married Laura Maeck, granddaughter of Dr. Frederick Maeck, the first physician to settle in Shelburne. She died in 1885. They had two sons, Frederick M. , a civil engineer, who died in the government service during the Spanish war, and Charles l. of New York.

Mr. Barstow went West at an early age, and engaged in business in Detroit, Mich. He returned to Shelburne in 1857 and assumed charge of his father's farm.

In the fall of 1861, while assistant clerk of the House of Representatives at Montpelier, he was appointed on the non-commissioned staff of the 8th Vermont volunteers, later being promoted to the rank of adjutant, captain and major. He participated in all the engagements in which his regiment took part, and was complimented for eminent service on the field, for gallantry in the assault on Port Hudson, and was honorably mentioned for his personal services.

Gov. Barstow was a republican and had held various town offices. He represented Shelburne in the Legislature in 1864-65, was senator from Chittenden county in 1866-67 and was United States pension agent at Burlington by appointment of President Grant 1870-8.

The Ely riots occurred while he was governor and his course in requiring that justice should precede force, and that the rioting miners should be paid their honest dues, attracted much favorable comment throughout the country.

In religious belief he was an Episcopalian. He had been a Mason since 1853 when he joined Union lodge of Strict Observance at Detroit. He was a past master of the Loyal Legion, an ex-president of the Officers Reunion Society and a member of the Grand Army of the Republic.