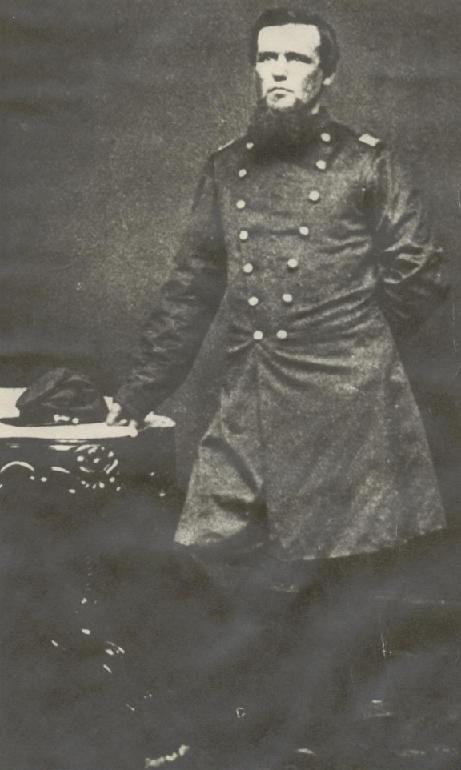 The son of Vermont Adjutant General and Supreme Court Justice Daniel Kellogg and Jane McAfee, George Bradley Kellogg studied law, became an attorney and moved to Brattleboro. He married Mary Lee Sikes on March 15, 1847, and they had two daughters - Jane McAffee Kellogg, born September 23, 1849, and Sarah Bradley Kellogg, born January 6, 1853. Kellogg served as Windham County State's Attorney and a member of the Vermont House of Representatives. He was Vermont's Adjutant General from 1854-59. In 1861 Kellogg was appointed Brattleboro's Deputy Postmaster and also accepted a commission at the outbreak of the Civil War to recruit troops for the Vermont Militia. He helped raise the 1st Vermont Cavalry Regiment and was appointed Lieutenant Colonel and second in command. Kellogg fought in several battles before being discharged in 1862. He then moved to St. Louis, where he reestablished his law office and served in the Missouri Militia as a Major. In March 1867 President Andrew Johnson nominated him to be US Attorney for the Eastern District of Missouri, but he was not confirmed by the Senate. He was originally interred at Holy Trinity Cemetery, and the remains at that site were later moved to Calvary Cemetery.

Bill's note: Sources I found indicate that Kellogg was dismissed from the military for being absent without leave -- apparently he was unhappy that he did not receive the command and promotion to Colonel after the first commander resigned, and again after the second commander was killed. These sources also indicate that Kellogg was later allowed to submit a backdated resignation. I know that his service must have been considered honorable, because in my research I saw the card showing that his wife was receiving a widow's pension.