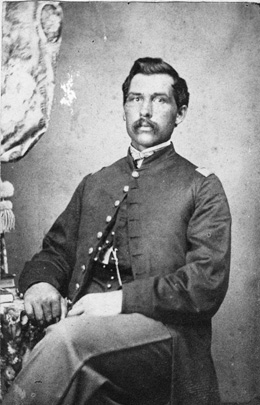 Kenfield, Frank, of Morrisville, son of Asaph and Eliza (Shephard) Kenfield, was born in Sterling, now a part of Morristown, March 13, 1838. George Kenfield, the grandfather of Frank, was a soldier of the Revolution. Asaph was the first male child born in Morristown, and followed farming as his life occupation. He was born June 26, 1794, and died Oct. 11, 1866.

Frank was educated in the common schools, and at the People's Academy, Morrisville. After he was of age, he went to Massachusetts for a year, where he taught school and then made a tour of observation through the West and South. In the spring of 1860 he returned from his wanderings, built a saw mill at Morristown Corners and commenced the lumber business, but this was interrupted by the call to arms, that resounded through the land in 1861.

He enlisted Sept. 24, 1862, as a private in Co. E, 13th Regt. Vt. Vols., was immediately elected 2d lieutenant, and soon after promoted to be 1st lieutenant. He was with his regiment every day of its service, and when General Pickett made his furious charge at Gettysburg he had the good fortune to capture a Confederate captain, whose sword is still in his possession. In the latter part of this engagement, he received a severe wound. On his recovering, he again entered the service, recruited Co. C., 17th Regt., was commissioned its captain, and mustered in, Feb. 8, 1864. The third attempt at battalion drill of this regiment was on the bloody field of the Wilderness, and there Captain Kenfield was again severely wounded, sent to the hospital at Fredericksburg and allowed a thirty-days' furlough. At the battle of Petersburg Mine, July 30, 1864, his company was almost annihilated, and he was captured and sent to Columbia, S. C. After seven months' imprisonment he was transferred to Wilmington, N.C., and paroled. He was mustered out of U. S. service, May 15, 1865.

Since his return from the army Captain Kenfield has been actively engaged in mercantile pursuits, but more recently he has given attention to farming and stock and produce buying.

He has been entrusted with nearly every town office, and was sent to the Legislature in 1884, where he served on the general and military committees. He was influential in securing the appropriation for the soldiers' home and was appointed one of its trustees. He holds the office of assistant quarter-master-general of the department of Vermont GAR

He married, Sept. 5, 1866, Lamott C., daughter of Louis and Catherine Wheelock of Montpelier; she died in 1872, leaving one daughter, Kate B. (Mrs. Carl Smith). February 9, 1874, he formed a second alliance with Mrs. Margaret Lyman, daughter of David and Ann Cruller.

Captain Kenfield is a member of the Loyal Legion, and has served as commander of J. M. Warren Post, GAR, of Morrisville. For more than thirty years he has been numbered among the brotherhood of Free Masons.

Capt. Frank Kenfield of Morristown Mustered Into The Mighty Legion of Eternity June 11, 1914.

Captain Frank Kenfield, who has failed rapidly since April 1, died Thursday shortly after noon at his home on Pleasant Street, death resulting from progressive paralysis.

Capt. Kenfield, who was one of three children of Asaph and Eliza (Shepard), was born in Sterling, now part of Morristown, March 13, 1838, on the place built by his grandfather, who came here from Bow N.H. about 1792, being one of the first settlers in the town. Mr. Kenfield lived on this farm until 17 years of age, when the parents moved to the birthplace of his father, (who was one of a family of 11 children and the first male child born in Morristown). This farm is known as the Kenfield Farm, and is situated near Morristown Corners. Previous to this time his educational advantages were very limited, the nearest school being three miles away, making it difficult for him to attend in bad weather. Conditions were more favorable after moving to the new home and later he taught school, and finally completed his education at Peoples Academy.

In Sept. 1862 he enlisted as a private in Company E, 13th Vt, under Capt. Joseph Boynton, and Col. Randall. He was elected second lieutenant and on June 12, 1863, as 1st lieutenant and commanded his company at the battle of Gettysburg where he led them again Pickett's furious charge. On this occasion Capt. Kenfield had the good fortune to capture a Confederate Captain whose sword he kept. At the close of the charge, he received a serious wound inflicted by a piece of shell. After serving out his enlistment he re-enlisted in Co. C, 17th Vt., and was commissioned its Captain Feb. 2, 1864. He participated in the battle of the Wilderness, where he was again wounded, this time in the left arm. He returned home in May but rejoined his regiment a month later in front of Petersburg, resuming his old command although his company had been almost destroyed, there remaining but 20 men fit for duty out of the full enlistment of 101. Capt. Kenfield and company was engaged in picket duty for a time and led a charge on the celebrated mine explosion in front of Petersburg. Out of seven officers who took part in the assault, five were killed, and the other two, one of whom was Capt. Kenfield, were taken prisoners and confined in the prison at Columbia, S.C. for seven months.

On Sept. 5, 1886(sic), he married Miss Lamotte Wheelock, of Montpelier, and to this union was born a daughter, Mrs. H. Carl Smith, who survives him. Mrs. Kenfield died in November, 1870, and Feb. 9, 1874, he married Mrs. Margaret Lyman, of Morristown, who died April 2, 1911. Besides the daughter, the deceased is survived by an adopted daughter, Miss Alther Reynolds, and a brother, Horace Kenfield, of Morristown Corners. A sister Jane Ann, died in June, 1904.

After his return to civic life Capt. Kenfield engaged in the mercantile business but later returned to farming which with stock and produce buying constituted his principal business for several years.

The deceased was a staunch Republican and held many town offices. He represented the town of Morristown in 1884 and was elected to serve Lamoille County in the Senate in 1894. While in the House of Representatives he served on the general and military committee and took an active part in securing the appropriation for a soldiers' home, and was appointed one of the trustees, which office he held for many years . In the senate he served on the railroad and was chairman of the military committee. He also served on the railroad commission for two years, and was president of the Vermont Maple Sugar Makers' association for four years. He served for some time as the commander of James M. Warner Post, GAR, and in 1903 was elected Dept. Commander, and conducted the department to San Francisco, where the national incampment was held that year. Captain Kenfield was a member of the Military Order of the Loyal Legion, of Mt Legion Lodge, F&AM, and a charter member of James M. Warner Post.

Capt. Kenfield was one of Morristown's most upright citizens had taken prominent part in town, state and national affairs, and was well known as a man of exceptionally great executive ability. He was a man of Sterling qualities, a person of generous impulses, and was regarded as one of Morrisville's most public-spirited citizens, being always ready to contribute liberally for every good cause. He has spent all of his life in his native town, with the exception of a few months in the west and the south just previous to the Civil War, and will be greatly missed by relatives and friends both here and elsewhere, and especially in the community where he has been a familiar figure for so many years.

Funeral services were held from the late home of the deceased Sat. at 1:30 p.m., Rev. W. E. Baker of the Cong'l church officiating. The funeral was very impressive and was largely attended, speaking eloquently of the esteem in which the deceased was held. The honorary pall bearers were Col. H. W. Allen, Capt. Carl Williams and E. N. Peck of Burlington, S. W. Benjamin and J. G. Farewell of Montpelier, and Judge D. C. Walker, a cousin of Cambridge. The bearers were A. A. Niles, of the 9th Vermont, William G. McClintock, of the 17th Vt., who together with Joseph Chaplin were captured with Cap. Kenfield at "The Crater" near Pittsburg, and who has been a life long friend, C. A. Gile, Thomas C. Cheney, James M. Kelly and Walter M. Sargent. The members of James M. Warner Post and WRC attended in a body, and the bugle call was given by C. A. Gile. Interment was made in the family lot at Pleasant View Cemetery.

The floral display was large and very beautiful, including aside from Mrs. Henry Clark, from East Orange wreath: 13th Vt. Reg, wreath: James M. Warner Post, spray of pink carnations: S. of V., and Auxiliary, carnations: Mrs. Carl Smith, pillow: Miss Althea Reynolds, pillow. The casket was draped with a silk flag, tied with black, which was the gift of the Military Order of Loyal Legion. Rev. Mr. Baker gave glowing tribute to the noble life of the man just passed to the great beyond, closing with the original lines: Hark! 'Tis the stirring sound of martial drum, The blast of bugle calls men to the fray, From Mountain home and sea washed state they come, To Follow where duty leads the way, Hark! 'Tis the voice of bugle sounding "Charge!' In name of truth and right, the call of God. And from great deeds of heroes they emerge The paths in which a nations feet have trod. Hark! 'Tis the note of bugle sounding clear, The day has passed into the silent west. Put out the lights, the hour of nights are here, The battles o'er, the soldier goes to rest.

(COMMENT: date of 1st marriage as published is in error; it was actually 1866 - webmaster)