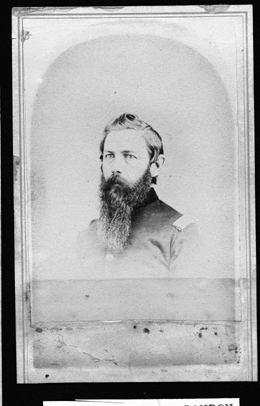 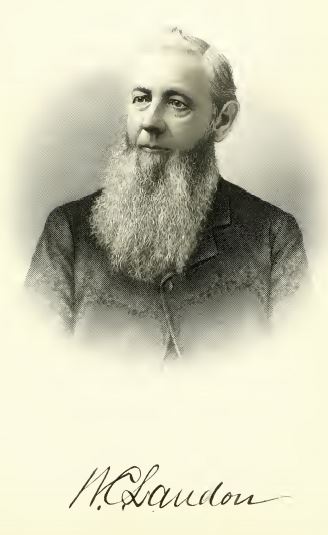 Walter C. Landon, the second child, was born on the 17th of August, 1831, in Sunderland. He received such education as the excellent New England common schools afford, attending winters only, and in summer time working out. At the early age of fourteen years he left home and worked for two years on a farm in Arlington, Vt. Thence he went to Bennington, where he passed four years as clerk in the general store of P. L. Robinson. In the spring of 1852 he came to Rutland, and became clerk in the hardware and grocery store of Landon & Graves, which was known as the "old red store," and stood on the site of Sawyer's block. The firm soon after became J. & A. Landon, but because of his experience and abilities, and being a cousin of the proprietors, the subject of our sketch retained his position, in all about five years. Then, with Chester Kingsley as junior partner, he opened a grocery store in the same building, which J. & A. Landon had vacated for a new building. After the lapse of three years Mr. Landon sold out to Kingsley, and with J. W. Cramton bought in the Central House, which stood on the present site of Clement's bank building. Mr. Landon assumed the management of this house, and remained there until March, 1863. In the meantime, however, he enlisted for three months in the First Vermont Regiment (infantry) and was detailed as color sergeant, and after went out as captain of Co. K. in the Twelfth Regiment. After he sold his interest in the hotel to Mr. Cramton, he entered into partnership with J. N. Baxter in September, 1863, and opened a grocery store in the building now occupied for a like purpose by E. D. Keyes. In the following May Mr. Landon obtained control of the entire business and carried on the store until November, 1865. He then removed his business to the Perkins Block, on the corner of West street and Merchants Row, which he had purchased. In January, 1868, with C. F. Huntoon as junior partner, he originated his present business in the same building which he now occupies. Mr. Huntoon's health failed in October, 1875, and he sold his interest to Mr. Landon, who has continued alone ever since. From a small beginning he has increased his business until he may safely say, with pardonable pride, that he is proprietor of one of the most extensive hardware houses in the State. Not only, however, has he attained promenence in the private walks of life, but he has been repeatedly and against his inclination, called upon to serve in various public capacities. From 1864 to 1875 he was town, village and school treasurer; was one of the listers in 1874, 1881, 1882, 1883 and 1884; has held the office of water commissioner for nine years, and holds it now; is also one of the board of selectmen; was for twenty years an active member of the Rutland fire department, and for ten years preceding 1882 was chief engineer of the fire department. He also represented the town of Rutland in the State Legislature in 1882-83, a distinction the more prominent by reason of the relative numerical population and commercial and manufacturing importance of the town. Of course Mr. Landon is a member of the Grand Army of the Republic, as what soldier is not. He has been a member of the Knights of Pythias ever since the organization of the order in Vermont. He is now, and since its be- ginning has been, one of the directors of the Baxter National Bank, is one of the directors of the True Blue Marble Company, and treasurer of the Evergreen Cemetery Association. On the 16th of June, 1861, Walter C. Landon married Mary M. Manley, of Rutland. They have one child, a son, Charles Huntoon Landon, who was born April 3.

After an illness of only one week with pneumonia, Walter C. Landon, the oldest business man in the city, died yesterday afternoon at 1 o'clock at his home, No. 133 Grove street. Mr. Landon, who was in his 79th year, was born in Sunderland, August 17, 1831 and was the son of Noah Landon.

At the age of 14, he left home and worked on a farm in Arlington for two years, going at that time to Bennington, where he clerked for four years in the store owned by P.L. Robinson. He came to Rutland in 1852 and took a position with his cousin in the firm of Landon and Graves, who occupied what was called "the old red store" on the present site of the Sawyer block. In 1857 Mr. Landon entered into partnership with Chester Kingsley and these men started a grocery store. He sold out to Mr. Kingsley and, in partnership with J.W. Cramton, bought the old Central hotel, which they ran for several years. Selling out his interest in the hotel business to Mr. Cramton, Mr. Landon went into partnership with J.N. Baxter, operating a grocery store. In 1864 he took over the business and ran it himself in the Keyes block. Next year, he moved to the corner of West street and Merchants row. In 1868, Mr. Landon opened up the present business in the present building, with C.F. Huntoon as his junior partner. Remaining in the hardware business, they built up one of the biggest hardware concerns in the state. Mr. Landon was at one time prominent in politics, both municipal and state. For the years 1864-1875, he was town, village and school treasurer and was later in the years 1874, 1881-1884. He was water commissioner for nine years, a member, at one time, of the board of selectmen, for over 20 years a member of the city fire department, and for 10 years preceding 1882 was chief engineer of the fire department. In the years 1882-3, he represented the town of Rutland in the state Legislature. At one time, he was a director of the True Blue Marble company, and he had been a director of the Baxter National bank from its inception and, at the time of his death, was its vice president. For years he held the office of treasurer of the Evergreen Cemetery association. Mr. Landon had an interesting army career. A member of the old Rutland Light Guards, he was one of the first to enlist for the Civil war. He was a sergeant and color bearer in company A., First Vermont regiment and saw three months active service from May to August 1861, fighting in the battle of Big Bethel. He re-enlisted in 1863, and left Rutland as captain of Company K, 12th Vermont regiment. He served nine months this time under General Stannard of the Vermont brigade, who was in charge of the baggage train at Gettysburg. Mr. Landon was commander of Roberts post, Grand Army of the Republic, at the time of his death, he and the other two senior officers, Milo Lyman and H.G. Sheldon, having been members of the same company during the war. He was also a member of the Knights of Pythias, of Rutland lodge of Elks, and one of the Loyal Legion. Mr. Landon was a trustee of the Elks club. He is survived by one son, Charles H. Landon of this city, a brother, Warren E. Landon of Connecticut, and a sister, Mrs. Fannie P. Nichols of this city. The funeral will be held at Trinity Episcopal church, Tuesday afternoon at 2:30 o'clock and Roberts post, G.A.R., will have charge of the services.