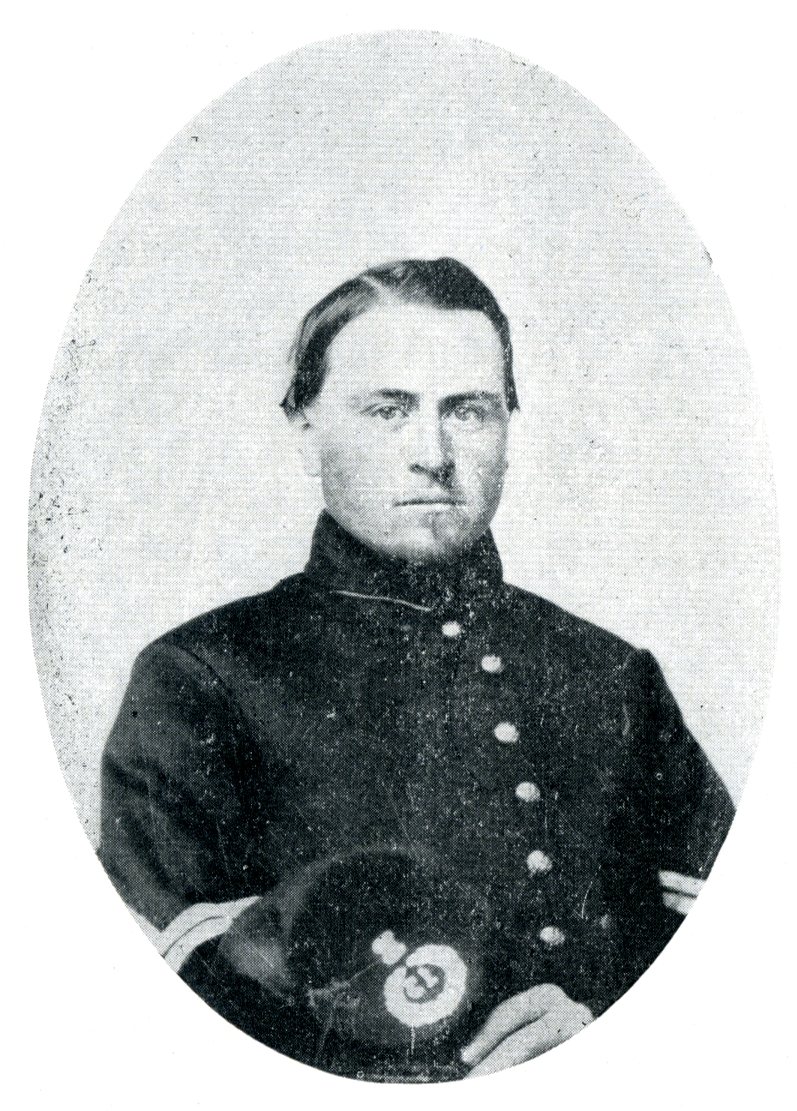 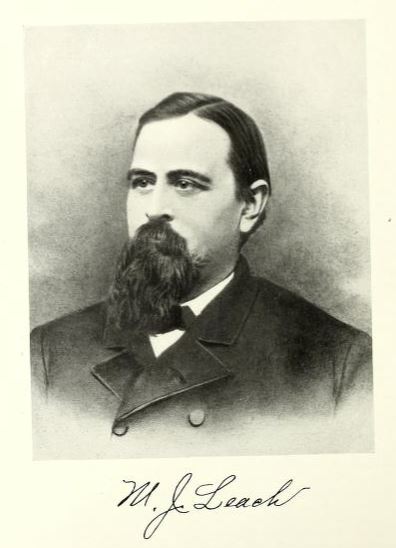 FOURTH CORPORAL MOSES J. LEACH was from the town of Wolcott, was a valuable addition and O. K. for neatness and promptness for duty and took more pains and gave the tactics more study than any other man in Company E, beneath the rank of commissioned officers and if necessity required he could have drilled either a company or a regiment. Mustered out on July 21st, 1863.

Leach, Moses J., of Wolcott, son of Ervin and Mary Ann (Scott) Leach, was born in Craftsbury, Dec. 22, 1837. He can trace his lineage back to the old Puritan stock that made the glory of New England, to within ten years of the time when the little band of pilgrims first landed on Plymouth Rock.

When he was nine years old his father moved to Wolcott where the son received whatever educational advantages the common schools afforded and afterwards attended the People's Academy of Morrisville. He remained in the employment of his father one year after his majority to repay him the amount spent in his academic training. Soon after young Leach went to Massachusetts where he was employed in a saw mill until the early winter of that historic year, 1861. In August, 1862, he enlisted in Co. E, 13th Regt. Vt. Vols., and participated with that organization in the famous flank movement of Stannard's brigade which repulsed General Pickett's great charge at Gettysburg. He wore a corporal's stripes and was not absent from his company a single day.

Upon his return to civil life he "beat his sword into a pruning hook" and established himself upon a farm which he cultivated till 1869, then sold the property and removed to the centre of the village where he built the first drug store ever erected in the town and has carried on this business since that time.

Mr. Leach was united, March 16, 1864, to Ellen B., daughter of Moody and Millicent (Moulton) Parker of Wolcott.

Naturally he is a comrade of Gen. George P. Foster Post, GAR, and has filled several important offices in the department and national encampment of the order. He has received the three first degrees of Ancient Craft Masonry, in Mineral Lodge, No. 93, of Wolcott.

Mr. Leach cast his first presidential vote for Abraham Lincoln and has continued a Republican ever since. He has done thorough and successful work in many town offices, having served as town clerk continuously since March, 1872, and was appointed postmaster in December, 1890. Several times he has been selected as a delegate to county and state conventions, and under no circumstances has he betrayed a trust reposed in him.

Moses J. Leach passed away at 2:20 p.m. Monday morning. The deceased was 77 years of age the 22nd day of December last. He has been in failing health all winter, but has been able to attend to his usual duties up to the last. He died of heart trouble. He was born in Wolcott, and has always resided here. He maintained a drug store here for several years, has been town clerk for over 45 years and Postmaster for several years, being succeeded by his wife this fall. He is survived by his wife, one brother, Almon Leach of this town, and one sister, Mrs. Robbins of Craftsbury, besides several nieces. Funeral arrangements have not been made at this writing, He was a member of Geo. P. Foster Post GAR, Mineral Lodge No. 93, F&AM Chrystal Chapter, No. 9, OES