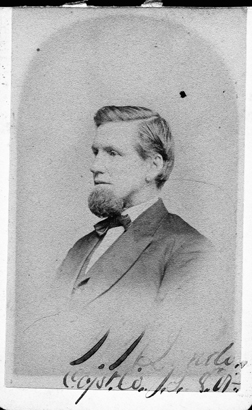 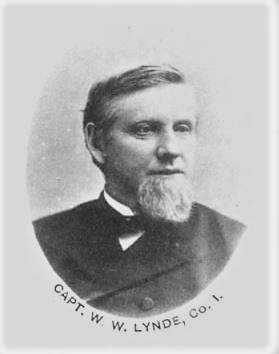 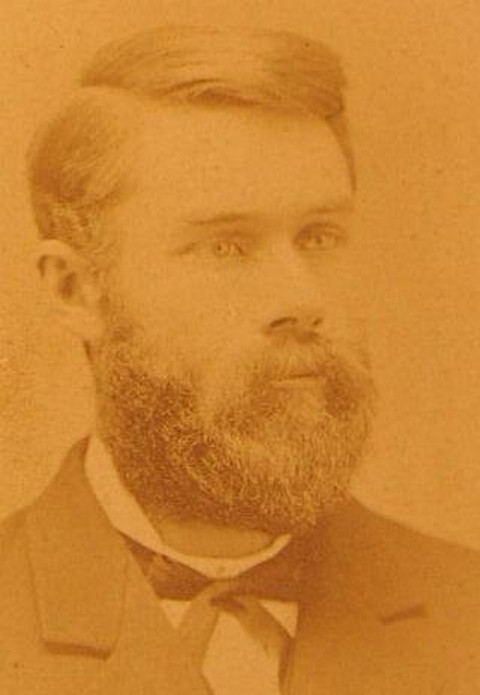 Gen William W. Lynde, whose sudden death on Friday, March 27 was briefly mentioned last week, deserves something more than a passing notice. His was an exceedingly active and busy life--in some respects a remarkable one--and his comparatively short but successful career has once again demonstrated what a young man of courage and push may accomplish, even though he be cast upon the world at an early age, without fortune or influential friends to aid and encourage him. He was born in Guilford, Feb. 13, 1829, and was the eldest of the 11 children of Daniel and Tamson Lynde. In his boyhood he labored upon the farm, which served to develop in him great physical strength, a fine manly frame and a robust constitution. His parents were poor, and, with their large family of young children, William had but few of the advantages of a boy of his day, and becoming restless and uneasy, at an early age and with the consent of his father, he launched out into the world under his own banner, with a firm resolve to be somebody--in other words, to make life, with him a success. To do this, be believed that education was essential, and to obtain that he did whatever his hands found to do during the spring , summer and fall, earning money to keep himself decently clothed and a little to lay by, and did chores for his board and attended school in the winter. He was quick to learn, and took advantage of several terms at Melrose seminary in West Brattleboro. He taught school winters, in which profession he became quite proficient and was well liked. At one time he was employed in the store of Calvin Townsley & Sons, in this village. Subsequently he went to Boston, where he became proprietor of a blacksmith shop. Disposing of this business, he went from Boston to Worcester, where he found employment for a while, and in the fall of 1854 removed to Marlboro and became a clerk in the store of C.M. Houghton. In 1856 he succeeded Mr. Houghton and continued in the mercantile business there until the winter of 1860-61, when his store and goods were entirely consumed by fire. In November, 1861, when a member of the legislature, he came home and enlisted as a private soldier in the service of his country, and was commissioned by Gov. Holbrook to recruit a company for the 8th Regiment, with headquarters at Williamsville. Upon the organization of that company (I), in January, 1862, he was elected and commissioned its captain; and upon the muster-in of the regiment it was attached to Gen. Butler's New Orleans expedition, where he served with credit until October 18, 1863, when, by reason of a serious attack of chills and fever, he was compelled to resign and return home. He was on officer of great courage and sound judgment, and his advice was often sought by his superior officers. His enforced retirement from the regiment was deeply regretted by his own men, to whom he was strongly attached, and by his brother officers, all of whom, of whatever rank, highly respected him. As soon as he had sufficiently recovered his health to be about, he entered heartily and energetically into public affairs, and gave material aid in the promotion of enlistments and to the strengthening of the government until the close of the rebellion.

In 1866 he again opened a store in Marlboro, and continued in that business most of the time up to and including the year 1877, when he disposed of his property and business interests there, and in February, 1878, removed to this village, where he had since resided.

Upon coming to this town he engaged in the grain, feed, flour and milling business with Mr. Edwin Earle for about a year, after which he continued it alone until the close of the year 1881, when he sold to the present Valley Mill company. At this time his health had become seriously impaired--the result, doubt, of a severe injury to his head, received in a railroad collision on the New York Central railroad November 3, 1873 (sic. date difficult to decipher), from the effects of which he had never fully recovered, together with long-continued overwork--and by the advice of his physicians he entirely abstained for a while from any exciting business; but he active, energetic nature could not brook idleness so long as there was work to do , and though in comfortable circumstances financially, and fully realizing the danger of actively engaging in business, some two years ago he again launched forth, and has since prosecuted (sic. again hard to decipher) with his accustomed energy the wholesale and retail grain and flour business, and many other business enterprises as well.

That, superadded to his own private cares, he bore his just share of the public burdens, is evidenced by the fact that he was hardly ever free from such duties. Going to Marlboro in 1854, he was elected constable and collector of taxes in 1856(?): he was town clerk four years; one of the selectmen for three years; a lister one year; town agent one year; superintendent of schools five years; a justice of the peace for ten years in Marlboro and since 1882 in Brattleboro; was a town auditor for many years; represented Marlboro in the legislature 11 years; was state senator in 1870 and 1871; quartermaster general of the state from December, 1870 to December 1874, and one of the presidential electors in 1880 (?). He was one of the incorporators of the Brattleboro Savings Bank, which was organized in January, 1871, has been a member of its board of trustees since its organization, and for several years past one of the board of investment. His counsel and advice was frequently sought after by his neighbors and townsmen in business matters, and his services were frequently called into requisition in the settlement of estates in U. S. bankruptcy proceedings and in probate and insolvency.

In politics he was an unswerving Republican from the organization of that party to his death, and was nearly always present as a delegate at its state, district and county conventions, where his power and influence were often felt in the selection of candidates.

As a member of the legislature he wielded a large influence among its members, and often succeeded in securing the passage or defeat of a measure where other men representing much larger constituencies would have failed. Whether assaulting or defending a measure, he always fought aggressively and earnestly, and with his long service he became perfectly familiar with parliamentary rules and tactics and ready and proficient in debate. He had well defined opinions of his own, and, still better, he had the courage of his convictions and never hesitated to express them. He was plain and decisive of speech, and sometimes blunt. He disliked to see men of small caliber succeeding to office, and never was afraid to "No" to all such political self-seekers. For the reason that he was the kind of man above described he had his enemies who were bitterly hostile toward him; but his worst enemies must admit that he always struck out openly and straight from the shoulder, and was just as ready to receive as he was to give blows. He had an extensive acquaintanceship, and a host of warm and confiding friends wherever he was best known. He was generous, charitable, kind, warmhearted and affectionate; yet, like most other men, he entertained his dislikes, though for his friends and those he loved he was ready to make reasonable sacrifices. He was never connected by membership with any church organization, but held religious convictions of a somewhat liberal tendency, and always gave generously towards the support of preaching.

Gen. Lynde was married, Sept. 16, 1852, to Miss Calista Persons, daughter of Capt. Ebenezer Persons, formerly of Newfane, by whom he had two daughters--Flora, wife of Hugh Adams of this village, and Ida who died when about three years of age and is buried at Marlboro. He was extremely happy in his domestic relations, and leaves a widow and the one daughter named to mourn the loss of a kind husband and father. Several days previous to his death he seemed to have a premonition that he would not live a great while, and expressed the desire to be laid beside his little daughter in his family lot in the cemetery near Marlboro Center, where the greater portion of his active life had been spent. On Friday last, in the forenoon, he was about the village, but, not feeling well, he did no business, and returned home earlier that usual. He sat at dinner with his family, but was soon after taken with convulsions, and died of apoplexy about half-past two that afternoon. His funeral was largely attended at his late residence on Western avenue Sunday forenoon, Rev. F. E. Tower officiating, and his body was taken to Marlboro for burial.