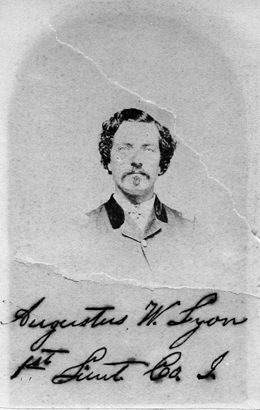 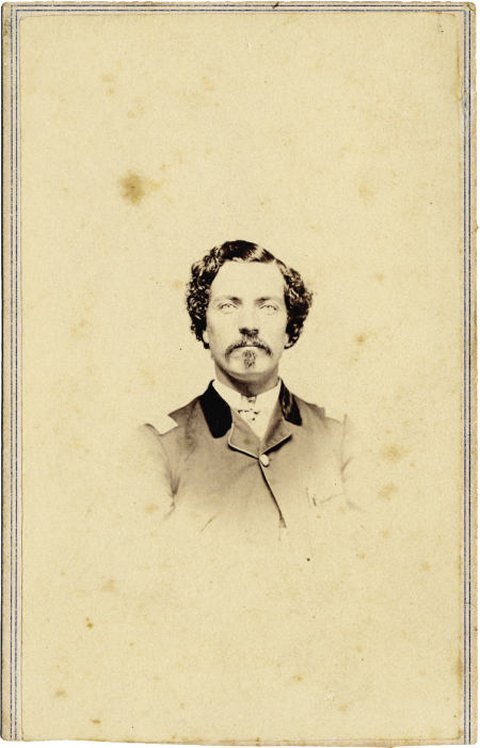 Augustus W. Lyon, son of Porter and Elvira (Morse) Lyon, was born on the 21st of March, 1833 in Morgan, Vermont. He attended the district school and Derby Academy. Around 1852 he moved to Massachusetts where for eight years he was engaged in the shoe business. He married on the 12th of July, 1856, Harriet B. Prescott of Oakdale, Massachusetts. She was born in 1833. They had three children:

Around 1860 Augustus returned to Vermont with his new family and was engaged for a year in a general store. He enlisted in Company D, 3rd regiment of Vermont volunteers, at St Johnsbury, Vermont on April 22, 1861. His personal description at the time of enlistment was 5' 7 1/2" tall, light complexion, blue eyes, and brown hair. He listed his occupation as farmer.

Augustus first wife Harriet died on the 29th of March, 1871. On the 1st of May, 1872, Augustus married Frances J. Clarke, daughter of Giles M. and Susan (Huggins) Clarke. Frances was born on the 12th of September, 1839 in Windsor, Vermont. They had three children:

When President Lincoln made a call for three year men Mr. Lyon enlisted at Charleston in Co. D. Third Vermont volunteer infantry; was mustered into the service July 1, promoted to sergeant and then to orderly sergeant. August 4 he was commissioned by Governor J. Gregory Smith second lieutenant, and transferred to Co. I; on October he was promoted to first lieutenant, and the following day was seriously wounded at Cedar Creek by a shell. Mr Lyon participated in the engagements of his organization. Among them may be named Williamsburg, Chapin Farms, Savage Station, White Oak Swamp, Melvin Hill, Campton's Gap, Antietam, Fredericksburg, Chancellorsville. Gettysburg and Culpeper. He was with Grant in the Wilderness through the Petersburg Campaign. He mustered out July 16, 1865, with his regiment.

Mr. Lyon took up farming at Westmore until 1894, when he located at West Charleston. He served Westmore as lister, road commissioner, treasurer, selectman, in 1882 represented the town in the General Assembly of Vermont.

In 1856, Mr. Lyon married Harriet Prescott of Oakdale, Mass. Three children were born to them George A. of Iowa, Porter E. of this place, and Etta E, Mrs C. I. Moore of Newport. Mrs. Lyon died March 29, 1871, and on May 1, 1872, he took for his second wife Frances Clarke and three children blessed this union: Fred A. (deceased), Eugene E. of this place, and Bert P. of New York York City.

Mr. Lyon was a member of the Loyal Legion, the military order of the United States. He was a member of Isaac Blake Post G. A. R., and served several times as commander, vice president of the Orleans County Veterans association, president of the Third Vermont Veterans association, and aide on the staff of department commander, with the rank of major. In 1867 he affiliated with the Masonic fraternity, and served as lodge master.

Mr. Lyon carried his 82 years very gracefully and was taken by strangers as a much younger man. He will be greatly missed in our village, on our streets, and in the homes of the sick and shut-ins. After ten days illness with pneumonia, he passed to the Great Beyond on Sunday morning Nov. 21. His funeral was held at the house on Wednesday at 2 p. m., a large number attending, all feeling they had lost a friend, Rev. W. D. Hetherington, assisted by Rev. W. R. Price were the officiating clergymen. Interment was in the family lot in the village cemetery. The bearers were his sons, Porter, Eugene, Bert, and son-in-law C. L. Moore. The eldest son George, of Iowa, was not able to be present, but with his family spent a month at the "Lyon's Den" cottage this past summer, which Mr. Lyon enjoyed very much. Several members of the G. A. R. were present to join the post in escorting the flag draped casket to its last resting place.

Mr. Lyons youngest brother, J. B. Lyons, of California and two sons, William of Lyndonville, and Elmer of Ayers Cliffs, and their wives were present at the funeral, also his sons Freds widow and two sons of Westmore, nephews Oscar Lyon and Mr. Sanborn;Mrs. G. E. Clarke, Miss Julia Clarke, and Mr. and Mrs. Robinson of Island Pond, Mr. And Mrs. O. M. Carpenter of Derby Line, Mr. And Mrs. Carroll Davis of Newport, and Mr. and Mrs J. B. Holton, Mr. and Mrs Henry Lafoe and Fred Hamblett of this place, besides members of the immediate family. Much sympathy is expressed for the sorrowing ones. On account of lack of time we are unable to give a list of the flowers.