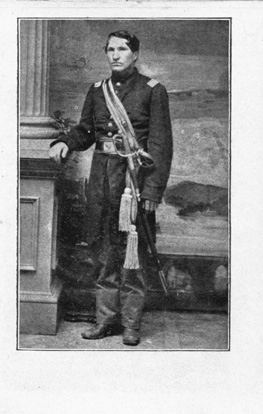 MARSH, Carmi L., late of Enosburg Falls. Manufacturer. Born Franklin, August 4, 1842; died December 29, 1910; son of Lathrop and Lucy (Chadwick) Marsh. Educated at public schools. In 1865 married Delia E. Pelton, daughter of Lyman E. Pelton of Highgate; they had two children, Lathrop Lyman and Lucy M. (Mrs. F. W. Draper). In 1879 he purchased of Dr. B. J. Kendall a half interest in the Kendall Spavin Cure business, and soon after Ollin Merrill and M. P. Perley became partners in the concern, the late Dr. B. J. Kendall Col., Mr. Marsh later becoming its president, a position which he held until his death; he also conducted a large feed and mill business. Enlisted in Co. K, 13th Vermont Volunteers, at Highgate, Sept. 11, 1862, and was unanimously elected second lieutenant of he company; Dec. 31, 1862, after two weeks' illness from typhoid fever, was removed to hospital at Fairfax Court House, Va., remaining until Jan. 20, 1863; following a long march to camp, Lieutenant Marsh suffered a relapse, and an attack of cerebro-spinal meningitis carried him near to death; Feb. 5th he was removed to the home of Mrs. Wilcoxon, where he recovered sufficiently to be removed to his home, resigning Feb. 17, 1863. Thirty years later he had succeeded in finding his old nurse, who had again married and moved to another state, and was then in destitute circumstances; annually until her death, General Marsh paid a visit to his benefactress, paying all her bills and making her last days comfortable, and at her death, July 29, 1902, he defrayed the expense of her illness and funeral charges. At the 22nd annual reunion of the 13th Regiment, held at Franklin, Sept. 8, 1910, was dedicated a beautiful soldiers' monument, the gift to his native town of General Marsh. In 1910 the Vermont Legislature changed the name of Franklin Pond to Lake Carmi, in appreciation of his valued services as a citizen. Was a Republican; represented Franklin in Legislature 1878-9; senator4 from Franklin County 1886; judge advocate general on the staff of Governor Barstow; president 13th Vermont Regiment Association, later becoming one of the "self-appointed committee of three" of the regiment, so called because they assumed the initiative in furthering the interest of the association. In religious belief an Episcopalian, and senior warden of the church; member Lincoln Lodge No. 78, F. & A. M., and Vermont Commandery of the Loyal Legion.

Carmi L. Marsh died Thursday at Enosburg Falls after a four months illness with uraemic poisoning. He was in his 69th year. He is survived by a wife, a son, L. L. Marsh, and a daughter, Mrs. F. W. Draper.

Carmi Lathrop Marsh was born in the town of Franklin in 1843, the only son of a prosperous farmer on the eastern shores of Franklin pond now Silver lake. He was educated in the common schools of his native town. He made himself proficient in all that applied to farming. In September, 1862, he was elected lieutenant of Company K at Highgate, being only 19 at the time. Lieutenant Marsh remained with the company in the faithful discharge of his duties until stricken with typhoid pneumonia the last of December, 1852, at Fairfax, Virginia. He suffered a relapse and his life was endangered. His illness necessitated his resigning from the army, and it was some years before he recovered his health.

In the course of a few years he bought a large interest in the Kendall Spavin Cure business, then at Enosburg falls, and soon made it a flourishing business. Mr. Marsh was honored in civil life at home, in the county and the State. When elected president of the 13th Vermont Regimental association, he said that he prized the "compliment as more honorable and distinguished, of which he was prouder than any other that had been conferred on him or could be.” None save his intimate friends know of his many deeds of philanthropy for many years past. Financially successful, he did much good in an entirely unostentatious way.

He married soon after the war, Miss Delia Pelton of Highgate, who survives him. Last September he presented to his native town of Franklin a soldier's monument, in connection with the reunion of the 13th Vermont regiment. On it appear the names of 150 soldiers who went from Franklin to the war. A proof of the high regard in which Mr. Marsh was held is instanced by the recent passing of a bill in the Legislature presented by the representative from Franklin, to change the name of Silver lake, formerly Franklin pond, to that of Lake Carmi. From having held the honorary position of judge advocate-general, Mr. Marsh was commonly known and addressed as "general.