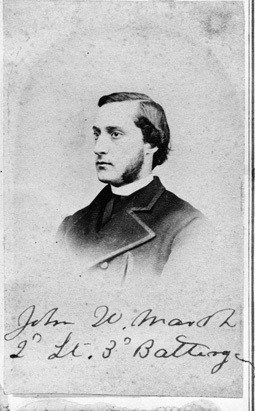 John Marsh died last week at his home in Chicago. The remains, accompanied by his family, were brought East, the interment occurring at Woodstock Monday of this week. Mrs. Marsh will spend a few days with her father, F. W. Porter, of this place, ere returning to Chicago.

Intelligence was received here last week of the death in Chicago Dec. 17th, of John W. Marsh, formerly located here in the practice of law.

John Worthington Marsh was born in Woodstock, Aug. 31, 1845, a son of Charles P. Marsh and Mary E. (Wright) Marsh. After fitting for college in Woodstock he entered Amherst college in 1863, but soon afterward enlisted as a private in the 3rd Vermont battery of light artillery, and afterwards served as sergeant and second lieutenant. At the close of the war he returned to Amherst, where he graduated in 1868 and was a member of the D.K.E. fraternity. He then took up the legal profession, pursuing his studies with the noted law firm of Washburn & Marsh, of which his father was a member. He served as private secretary to the governor of the state, and commenced his practice in Springfield, where he married Miss Annie S. Porter, daughter of Frederick W. Porter, who with two children survive him. In 1870 Mr. Marsh went west to Chicago and soon established a successful law business. He very early formed a partnership with Louis H. Bisbee, which was afterwards dissolved and he became a partner of John J. McKinnon, the firm being McKinnon & Marsh. He was afterwards associated with Julius S. Grinnell and finally established an agency for the loaning of money and dealing in commercial paper in which he was immensely successful. He gradually became inactive in business on account of ill health and finally withdrew from his business surroundings. He was a man of the highest integrity, of great business ability and the soundest judgment. He was a member of the Grand Army, a Mason, a Knight Templar, and a member of the Fair View Chapter and Apollo Commandery.

The remains were brought to Woodstock Monday for interment in the family lot and Mrs. Marsh and her son and daughter are now here at F.W. Porter's for a few days.