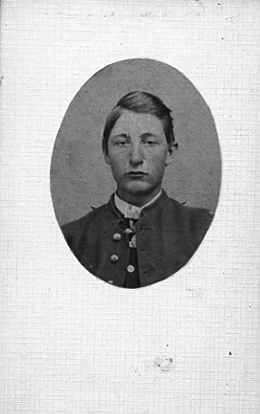 Nathan Kingsley Martin of Alburg and Burlington, who died at his home, 209 King street, at 5:45 Thursday evening after a two days' illness of pneumonia, was born in Constable, N.Y., June 7, 1843, the son of Jeddiah and Lovinia (Kingsley) Martin. He came to Alburg and a small boy and received his education in the public schools of the town. In August, 1862 he enlisted in Company K, 11th Vermont Heavy Artillery, serving in all grades and was finally discharged as a second lieutenant in July, 1865.

In 1872 he was appointed deputy collector of U.S. Customs in which capacity he was occupied until 1884. Subsequently engaging in the retail merchandising business which he pursued for more than 30 years, retiring in 1931. Since that time he has resided in Alburg and at 209 King street, Burlington.

He held various town and county offices from time to time and was senator from Grand Isle County in 1917.

On February 17, 1881 he married Eugenia Mott of Alburg who survives him with a son, Dr. Seth H. Martin of Johnson, and a granddaughter, Mrs. H. Nelson Morrell of New York city.

He was a communicant of St. Luke's Episcopal church of Alburg.

The funeral will be held at the residence of M. T. Mott in Alburg at 1:30 o'clock Sunday. Interment will be in the family lot in Alburg cemetery.

Friends are requested to omit flowers.