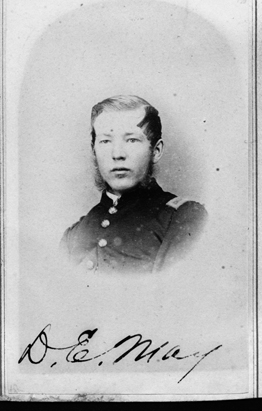 Col. Dennis E. May died Friday noon of cancer of the liver, aged 58. Mr. May was the son of Preston and Sophia Stevens (Grout) May and was born in Concord. Aug. 28, 1845. About eight years later his parents moved to the village of West Concord, where they lived the next 18 years. He had a gallant war record and came out of the struggle without a wound.

At the age of 17, he enlisted in Co. G., 17th regiment, and was mustered into the United States service April 12, 1864. He was promoted to sergeant April 12, 1864, and promoted comm. sergeant Oct. 17, 1864. On July 10, 1865, he was promoted to second lieutenant, and was mustered out of service as Com. Sergeant July 14, 1865, Lieut. May engaged in the battles of Spotsylvania. North Anna, Totopotomoy, Bethesda Church, Cold Harbor, Petersburg, and Poplar Grove. It well thus appears that he participated in some of the severest battles of the war.

He never lost his interest in army affairs, was for many years an officer in Chamberlain Post, G. A. R., and in 1877 was assistant adjutant-general for the department of Vermont. In 1887-1888 he was aide-de-camp on Gov. Ormsbees staff.

Mr. May came to St. Johnsbury in 1871, where he has since resided. He began as a clerk in Henry Fletcher's store and later entered the scale office, being for several years private secretary to. Col. William P. Fairbanks. In January 1888, he began the pension business, and in 15 years of continuous service became one of the most successful pension attorneys in Vermont. During this time he held many public offices, being village trustee four years. village clerk seven years and was one of the listers at the time of his death. He was actively interested in politics, and was one of the door keeps at the senate.

He married, February 16, 1865, Emily Holbrook of West Concord. She survives him with three children, Preston E. May a St. Johnsbury merchant, Mrs. Carl Weston of Burlington, and Miss Emily May of St. Johnsbury.

Funeral services were held on Pleasant Street Sunday afternoon, conducted by Rev. E. M. Chapman, assisted by A. F. Walch. The burial was at West Concord. Mr. May was a member of Moose Lodge F. &A. M. and the Masonic service was used at the grave.

In Col. Mays' death this town loses another brave veteran of that body, whose ranks being rapidly disseminated, and an active business man. For over 30 years he has identified himself with our business and municipal life, and his place will be hard to fill. He was intensely devoted to his family, and his love for his children and grandchildren showed the tender side of the man's life. The family have the deepest sympathy from a wide circle of friends.