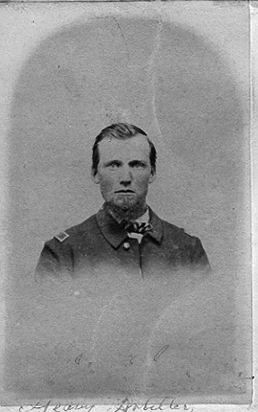 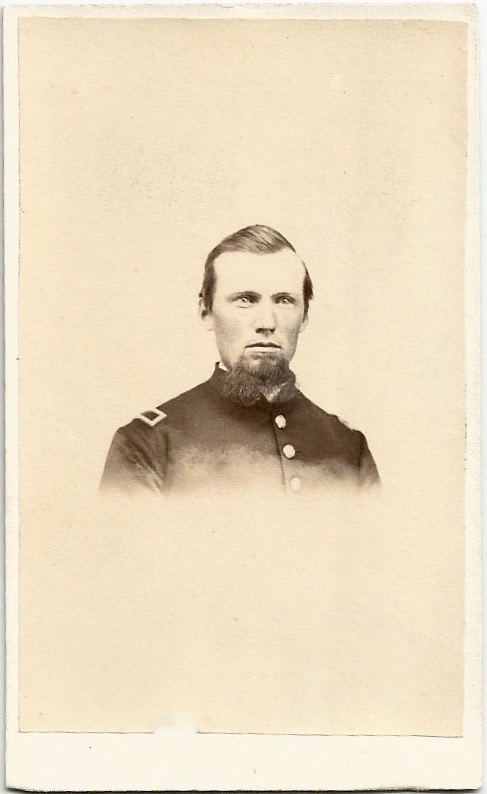 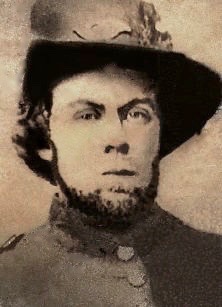 He was educated in the district schools of Westfield and before the war was a farmer, while his present occupation is that of an auctioneer. In August, 1862, he enlisted in Co. D, 11th Regt. In this organization, he was successively promoted from private through the grades of corporal and sergeant to that of 2d lieutenant. The regiment was first stationed in the defenses of Washington but was afterwards engaged in the battles of Spotsylvania, Cold Harbor, and on the Weldon R. R.; returned to Washington, and driving back the rebels at Berryville, then up the Shenandoah Valley, again returned to Washington and was afterwards detached to Harper's Ferry and after many forced marches and skirmishes around that place finally met the enemy at Opequan, where Lieutenant Bedell, acting as captain of the second company was struck by a shell which carried off his left leg and injured him severely in the right hand. He was conveyed to the temporary hospital on the field and suffered the amputation of his leg. A few days later the sick and wounded were ordered to be transferred to Harper's Ferry. As Lieutenant Bedell was so much exhausted it was impossible to move him and he was left in the hands of the rebels and would have perished had it not been for the kindness of a rebel lady in the neighborhood of the battlefield, who removed him to her own house and though her means could but barely furnish the necessities of life she nursed him with such care and attention that he was finally able to be transported within the Union lines.

Mr. Bedell is a Republican and while in Westfield acted as the constable of the town. After the close of the war he was for twenty years an employee of the United States as custom house officer. For five years of this period he was stationed at Richford and Berkshire and for fifteen years discharged the duties of inspector and deputy collector at Newport.

He is a Methodist in his religious creed; was one of the charter members and founders of Baxter Post, No. 51, G.A.R., and has been its junior commander.

Henry Bedell's 1864 diary
An Unknown Heroine
The Vermont Brigade in the Shenandoah Valley, 1864

Romance in His Life.

Lieut. Henry E. Bedell, who died at his home in Newport, March 15, in his 77th year, was for several years deputy collector of customs at West Berkshire and East Richford.

Lieutenant Bedell was born in Westfield in 1834, enlisted in Company D, 11th Vt. Inf., and was commissioned lieutenant January 12, 1864. In the engagement at Opequan Creek September 13, 1864, his right hand and left thigh were shattered by a Rebel shell. His left leg was amputated at the hip and three fingers were taken from the injured hand.

The remantic story of Lieutenant Bedell's recovery from his terrible wounds was told in a book entitled "An Unknown Heroine," written by the late L. E. Chittenden.