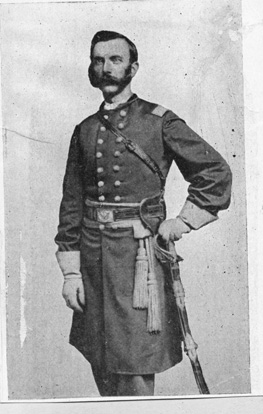 "A graduate of Norwich University, 1854. Captain Co D 13th Vermont regiment U.S.V., Sep 6th 1862. Promoted Lieutenant Colonel May 5th, 1863. At Gettysburg, Jul 02, 1863, he commanded the detached left wing of the Regiment supporting A Battery on cemetery hill. Jul 03, second in command, he participated with the Regiment, in the deadly assault on the flank of the Confederate charging columns, bravely doing his full duty in that terrible hour, which turned the tide of battle at the point since called, "the high water mark of the rebellion". This tablet is placed here by his comrades of the 13th Regiment, as a token of their respect for him as an officer, and their affection for him as a man. Jul 3rd, 1906."