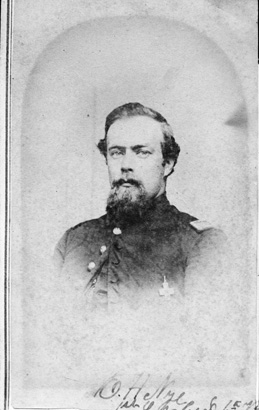 Elbert Hamilton Nye, a prominent and much loved citizen of Northern Vermont, died at his home in Glover May 14th after a brief illness, at the age of 84 years.

Mr. Nye was born in West Charleston, Dec. 3, 1839, the son of Lemuel Haskell Nye and Louisa H. Gage. When Mr. Nye was three years old the family moved to Glover. He was educated at the Orleans Liberal Institute. He enlisted in September, 1861, and when Company D, 6th Vt. Was organized, at Barton, Oct. 5, 1861, he was elected second corporal. Later he was promoted to sergeant, and second lieutenant and then to first lieutenant. He was mustered out of service in October, 1864 and was married to Miss Helen F. Heath in December, 1864.

Mr. and Mrs. Nye lived in Glover until 1871 when they moved west, living first in Charles City, Iowa, and later in Chicago. They returned to White River Junction in 1874 when Mr. Nye was employed by the American Express company from 1874 to 1910, serving as express messenger from White River Junction to Sherbrooke, as express agent 10 years and at Bradford 14 years.

Mr. Nye served on the staff of department commander branch the grand army of Vermont, in 1892 and on the staff of National commander in chief Lawler in 1894. Mr. and Mrs. Nye came back to their old home in Glover in 1910 to live out their days among friends and associations of their youth. Mr. Nye was a familiar figure at the camp fires and all the gatherings of the G.A.R. And always welcome.

Mr. Nye was a patriotic citizen, a congenial friend and was always interested in the best things in the community life. He was a member of Evening Star lodge I. O. O. F. of Newport, the Masonic lodge of Bradford and a loved member and often commander of Mason Post No. 1 of Glover. He is survived by his wife, two daughters, Mrs. Myrtie M. Clark and Mrs. Helen D. Steele, one sister, Mrs. Ella L. French of Merrimac, N. H., five grandchildren and two great-grandchildren, one daughter, Cora D. Nye. Died at Bradford in March 1898.

The funeral services will be held at 10 o'clock Thursday at the home in Glover and the burial will be at Bradford at 3:30 p. m.