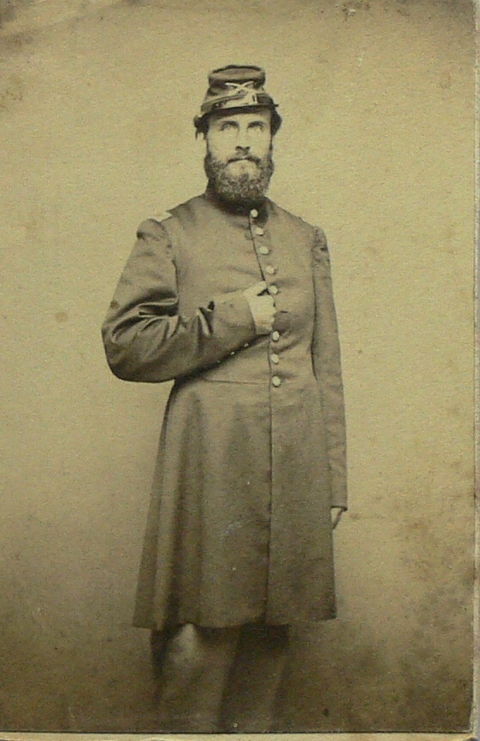 PAIGE – Major Henry M. Paige died in Patterson, N. J., November 29, 1885, aged 48 years. The disease which ended his life undoubtedly had its origin in the exposures and hardships of the war of the rebellion. Henry Martyn Paige was the second son of the late Hon. George H. And Betsey (Grow) Paige, and was born in Greensboro, Orleans county, in 1837. At the age of twelve years he removed, with his father's family, to Cabot, Washington county, where he resided until he attained his majority, and succeeded in obtaining a good practical education in the public schools, supplemented by a few terms at Barre academy. I n 1859 he went to Patterson and entered the employ of J. P. Huntoon, Esq., a large wholesale dealer in teas, coffee and spices, but the year following returned to Cabot and formed a partnership with B. J. Lance in the hardware business. In the summer of 1861 he responded to the call of his country, and throughout all the long, dark years of the war his home was upon the tented field. At the close of the war he returned to Cabot and soon after married Martha C. Cook, only child of Major Quinton Cook, now of St. Johnsbury, who, together with a daughter of fourteen, are now bereft of the strong staff upon which they confidingly leaned. Soon after his marriage Major Paige returned to Patterson and again entered the employ of Mr. Huntoon, where he remained until 1879, when, on Mr. Huntoon's retirement, he took his place, and, in partnership with two of his former employer's sons, has since prosecuted the business under the firm of Huntoon , Paige & Co. Appropriate funeral services were held at Patterson, attended by a large number of acquaintances and friends from his business circles in New York and elsewhere, and the remains were brought to Cabot, where, after another service among the many and warm friends of his youth, they were tenderly laid away to mingle with kindred dust. Of Major Paige's record during the war a distinguished officer of his regiment contributes the following: "Henry M. Paige enlisted as a private in Company C, First Regiment, Vermont Cavalry in September, 1861; was elected second lieutenant of the same company October 14, 1861; was promoted to first lieutenant November 18th of the same year; captain, October 30th, 1862; major, July 7, 1864; and was discharged, at the expiration of his term of service November 18, 1864. This constitutes the military record of a man who put aside the pursuits of peace and became a soldier, because he felt a patriot's impulse in the hour of his country's need. To many this may seem a short and insignificant record. To those who, at home, waited through the sad three years of the war for the return of their loved ones, and to those who were in the army with him, it is full of significance and suggestion. It recalls Bank's campaign in the Shenandoah Valley, Pope's campaign and the second battle of Bull Run, the dreary winter of 1862 and 1863, when, without shelter for men and horses, the regiment attempted to hold a line of isolated and disconnected picket posts against the guerilla Mosby. It recalls the proud march of nearly seven hundred men from Fairfax court house, May 24,1863, to the historic field of Gettysburg, and a series of eleven hard fights in fifteen days, that left but two hundred men in the saddle July 30, 1863. It recalls the second winter of picket duty along the Rapidan; Kilpatrick's raid to Richmond, Dahlgren's tragic death, the Wilderness campaign, Hawe's Shop, Yellow tavern, Wilson's raid, the Shenandoah Valley and the battles of Opequan and Cedar Creek under the lead of Sheridan. Through all those three years of marching, picketing and fighting, the subject of this sketch bore himself as a stout and faithful soldier, filling every position to which his duty called him to the satisfaction of his superiors. He was brave, patient, uncomplaining, reliable. These qualities insured the respect and obedience of his inferiors and the confidence of his superiors in rank. He had a quiet dignity of manner, the outcome of his high self-respect, that made his soldierly figure and fine face attractive at once. Though modest and re served in bearing, he was a genial friend and a hearty comrade, whose full, rich honest laugh enlivened many a campfire group. His thoroughness of character made him, as an officer, careful of his men in camp and in the field. Whenever they approached him they were sure of a respectful and careful hearing and a fair and judicious reply. His self-control was remarkable. I doubt if any one can recall an instance of his loss of temper, an undignified action or an ungracious word. This by no means implied a lack of spirit. He was keenly alive to the rights and privilege of his position. He was urgent and resolute in his defense of them. He asserted his proper self. He was unflinching in the performance of his duty, and he carried into private life the same sterling qualities that made him respected and loved as a soldier. The notice of his death will carry regret to many a comrade who had learned to love him and trust him because they had seen him tried by the hard experiences of war."