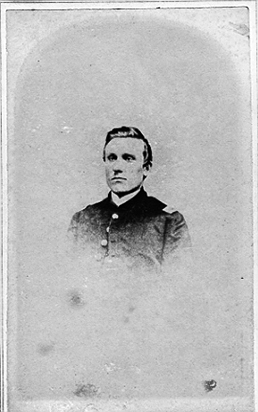 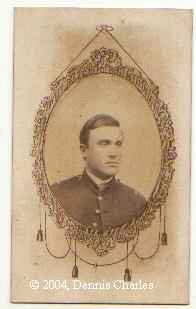 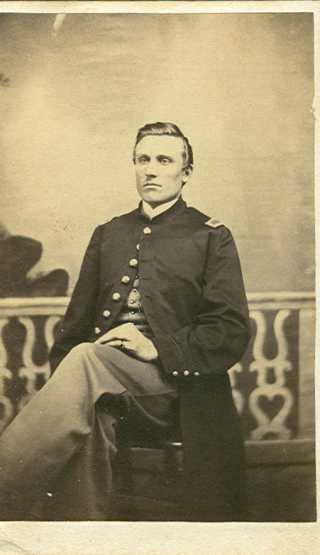 On the 23d of June, 1864, it was the lot of some 400 enlisted men and 17 officers of my regiment to fall into the hands of the rebels. We were taken to Libby, and from there to Lynchburg and Danville, Va; thence to Greensboro, N.C.; thence to Macon and Savannah, Ga., and from Savannah to Charleston, S.C., which city we reached about the 13th of September. Learning while there that we were soon to be sent to Columbia, S.C., Lieutenant Parker, of Middlebury, and myself resolved to make our escape. From the scanty provisions furnished us we saved enough, with what we could pick up, to last us four or five days, taking our chances for the future. On or about the 1st of October we were loaded into freight cars, and started for Columbia. Lieutenant Parker and myself took a position near the door of the car, guarded on either side. After leaving Branchville, Ga., the guards relaxed their vigilance somewhat, and the opportunity presented itself for our escape, which we embraced and jumped from the cars. We were fired upon by the guard but were not harmed, and after gathering ourselves up and holding a short council of war, from what we knew of the topography of the country, and by the aid of the north star as our guide, we started for East Tennessee. Lying secreted in the woods by day and traveling by night, we got on very well until the night of the 5gth, when attempting to cross the Wateree river by a bridge near where it unites with the Congaree to form the Santee, we found it guarded to apprehend deserters from the rebel army, then becoming numerous. When nearly across the bridge we were stopped, our passes demanded and we were ordered to the smouldering camp-fire at its end for examination. Getting a few feet from the guard, we again escaped, and though half a dozen shots were fired at us, all missed their mark. Going into the underbrush that grows in those swamps, we were soon out of present danger. After traveling until we were tired and faint, we stopped to rest. The river at this point forms a horseshoe curve, with the bridge at one end and the road touching the river at the other. An alarm was soon given and the dogs of the neighborhood placed upon our track; but as it was at dead of night and those low lands infested with reptiles, they would not follow us. Guards were next stationed from the bridge along the road to where it touched the river. I have said we stopped to rest, but it was a sleepless rest. In the stillness of that October night we lay, anxiously awaiting the events of the morrow. Death stared us in the face, and we prayed, like him in Gethsemane, "if it be possible let this cup pass from us; nevertheless Thy will be done." Early in the morning the reports of shot-guns told us plainly that preparations were on foot for our capture. Hemmed in as we were, unarmed and defenceless, we felt our situation to be most critical. We could hear the blood-hounds howling, anxious to be let loose to hunt us down, and by placing our ears to the ground we soon discovered they were on our track. Rather than fall victims to a fate we dared not contemplate, we resolved to reach the river, if possible, choosing death by drowning rather than by the dogs. Mustering all the strength our emaciated condition could give us, we struggled to reach the river, but when within some twenty rods of it the dogs overtook us. Taking Parker's track instead of mine, thirteen bloodhounds attacked him. The horrible manner in which they tore the flesh from his limbs, his body and his arms, I cannot adequately describe. With the flesh of his arms torn in shreds and the muscles of his body and limbs mangled and bleeding, he shouted: "Help me, I am being eaten up alive!" Unarmed, I could do little. With the walking stick I had I could only drive off three or four of the dogs, and by this time the others would be at him again. Soon five men came up. In my excitement, I paid no attention to their order to surrender until I was struck down and lay prostrate before them. I came near being shot. One of their number, a Mr. Mitchell, held the muzzle of his double-barreled gun against my breast and said he should have killed me had he not noticed a sign that I was a member of the same order to which he belonged. Meantime the others with their guns and clubs had driven the dogs off from Lieutenant Parker, and having wrapped him in his blanket we carried him to the station near by and laid him down. From there we were taken to Columbia, thirty miles by rail, where he lingered for several days. I did all I could for him as he lay in his dying agonies. He wanted to say something but could not till just before he died, when it seemed as if all pain had ceased and he looked up to me and said in a low whisper: "Tell my mother I tried to do my duty. Tell-[one whom he hoped in a few months to call his wife] that in death I loved her." With these words he died. I was then taken in charge by the guard and remanded to prison. Lieutenant Parker's remains were buried by the rebels, just where I know not; but the soil which covers him is no longer rebel ground, but is under the authority of that flag for which he fought and for which he paid the full measure of his devotion. He escaped October 5th, was run down by the dogs the 6th, and died of his injuries on the 13th.

Lt. E.B. Parker, Co. B, 11th Vt., died from the effects of being bitten by bloodhounds while attempting to escape. His death took place Oct. 13th, 1864, in the hospital at Columbia, S.C.