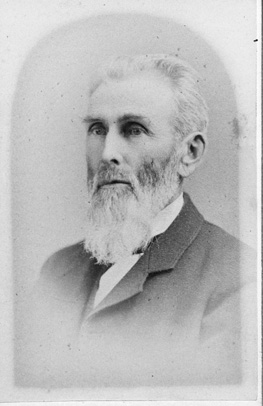 Peckett, John Barron, of Bradford, son of John Barron and Martha (Tilton) Peckett, was born in Bradford, Dec. 19, 1822, and has always resided there.

His education was received at the public schools of Bradford. His father was a dealer in lumber, a farmer, and a businessman who was a prominent figure in the early history of the town, of active energy and robust, vigorous frame. The son, though not cast in the same iron mould, inherited many of the mental traits of his parent.

At the age of fourteen years he entered the employment of Asa Low, Esq., a prominent merchant of the town. At his majority, he formed a partnership with Adams Preston, Esq., which continued three years. He then engaged with his former employer and remained with him until April 1854. He then purchased an interest in a large grist mill and sawmill in Bradford, and formed a partnership with Col. George W. Pritchard & Sons, and for thirty-seven years was the active manager of this establishment during the existence of four firms. An immense business was carried on in wood, lumber and grain during the entire period. Mr. Peckett's masterly management caused the respective firms to stand high in financial circles, and the business among the leading enterprises of the state.

He enlisted in 1861 in the Bradford Guards, 1st Regt., and as 1st Lieut. of that company was present at the battle of Big Bethel, being mustered out at the expiration of his term of service. He is a member of Washburn Post, No. 17, G.A.R.

Mr. Peckett has held many town offices, but is perhaps best known as justice of the peace, the duties of which he has performed for twenty years.

He was united in marriage, Sept. 9, 1847, to Caroline H., daughter of Asa and Lucinda (Brooks) Low of Bradford. Two sons and two daughters have been born to them: Asa Low (who at this writing is engaged in the claims department of the Boston & Maine R. R. at Boston, Mass.), John B., Jr. (who is an attorney at law at Bradford), Caroline Frances (deceased at twenty), and Martha L. (died in infancy).

He has conducted his business in such a systematic manner as to conduce both to private and public prosperity. He has been thoroughly identified with the financial prosperity of the town of Bradford and has constructed more buildings than any other individual in the place. By his diligence and energy he has acquired a handsome competency.

He was very influential in opening a road on the west side of Lake Morey, in Fairlee, and from the head of said lake to Bradford line. He has built a fine summer residence upon a beautiful and commanding point of the shore of said lake, and is greatly interested in the development of the locality.

The family for three generations have been strong advocates of temperance and emphatically in favor of an impartial enforcement of the legal enactments to suppress the liquor traffic.

John Barron Peckett, Esq., for many years prominent in the business affairs of Bradford, died at his home Saturday evening, about 8:30 o'clock, of urinary trouble and other complications, after a sickness of a little over two weeks. Mr. Peckett was born in this town Dec. 19, 1822, and consequently was upwards of seventy- one years of age. His residence was always in Bradford, and he had been in business of some kind and in some way since he was about sixteen years old. He was clerk for Asa Low most of the time during his minority, after he left school, and then for a time was partner of Adam Preston in the mercantile business. In 1854 he became one of the firm of G. W. Pritchard & Co., in the ownership and running of the brick grist mill and saw-mill connected therewith, and continued to own an interest in that property under various changes of the firm until the property was sold to Craig & hooker, in June 1891. Mr. was an industrious, hard working, prudent man and was very successful in business, and Peckett accumulated a large property. He seldom speculated but trusted to the gains of prudent industry and legitimate business. Sept. 9Th, 1847, he married Miss Caroline H., daughter of Asa Low, Esq., of the fruit of which marriage there survive two sons Asa Low Peckett, of Boston, and John Barron Peckett of this town, the former in the office of the Boston & Maine Railroad, and the latter a lawyer. His only daughter who reached maturity, died May 4th, 1874, in less than a month after her marriage to Dr. Horace Berry, of Cambridge, Mass. Mrs. Peckett died July 5th, 1889, in her sixty-second year.

At the breaking out of the Rebellion, Mr. Peckett was first Sergeant of the Bradford Guards and when that company started for the seat of war, May 2nd, 1862, he went with it as its first Lieutenant, and served through the three months' term. He carried his business qualities into his duty as an officer and was prompt and punctual in the performance of every task assigned him. For many years he took a prominent part in two affairs. He made no will but leaves the distribution of his large estate to the just provisions of the statute.

A friend of the deceased contributes the following:

Probably no man could disappear from the scene of his activity and be more directly missed than the subject of this notice. For sixty years he has been a daily, familiar figure on our streets, and has been a constant participant in the business life of the town. He was a man of positive opinions, and without much hesitation in their expression. Like the man, his friends and enemies were of a positive character; but whether friends or enemies resulted from the causes he espoused, made no difference in his actions. Every citizen knew where he could be found and when found, he was always there, and he was quite as often with the minority as with the majority. But few have ever doubted that his attitudes on questions affecting the community or the country were the result of honest conviction, however mistaken such convictions might be deemed by his opponents. The business habits of the man were as decided as his moral convictions. Everybody knew where he stood. He was a thoughtful, methodic man. He had a place for everything and everything was in its place. His homestead, his farms, his place of business, were models of neatness and regularity, and the whole character of the man was formed upon rectangular principles. There will b remembered by his survivors, and the judgments of his contemporaries will credit him with many qualities worthy of imitation. His death was not anticipated, and has been an unexpected shock to his family and friends. The funeral services were largely attended. The church was filled with citizens and friends, and the remarks of the two officiating clergymen were appropriate and feeling. The Grand Army comrades of the deceased were present in a body, and officiated at the burial with the accustomed ritual. The Women's Relief corps were also in attendance, and the uncommon length of the procession which followed the remains to the grave, attested the interest which the death of a citizen at once so prominent and pronounced in character, occasioned.

The places of business in the village were generally closed during the afternoon of the funeral.