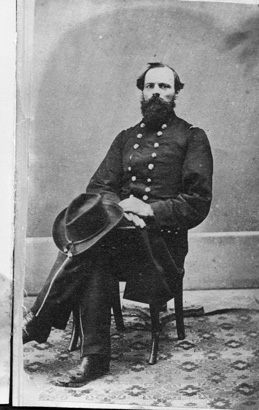 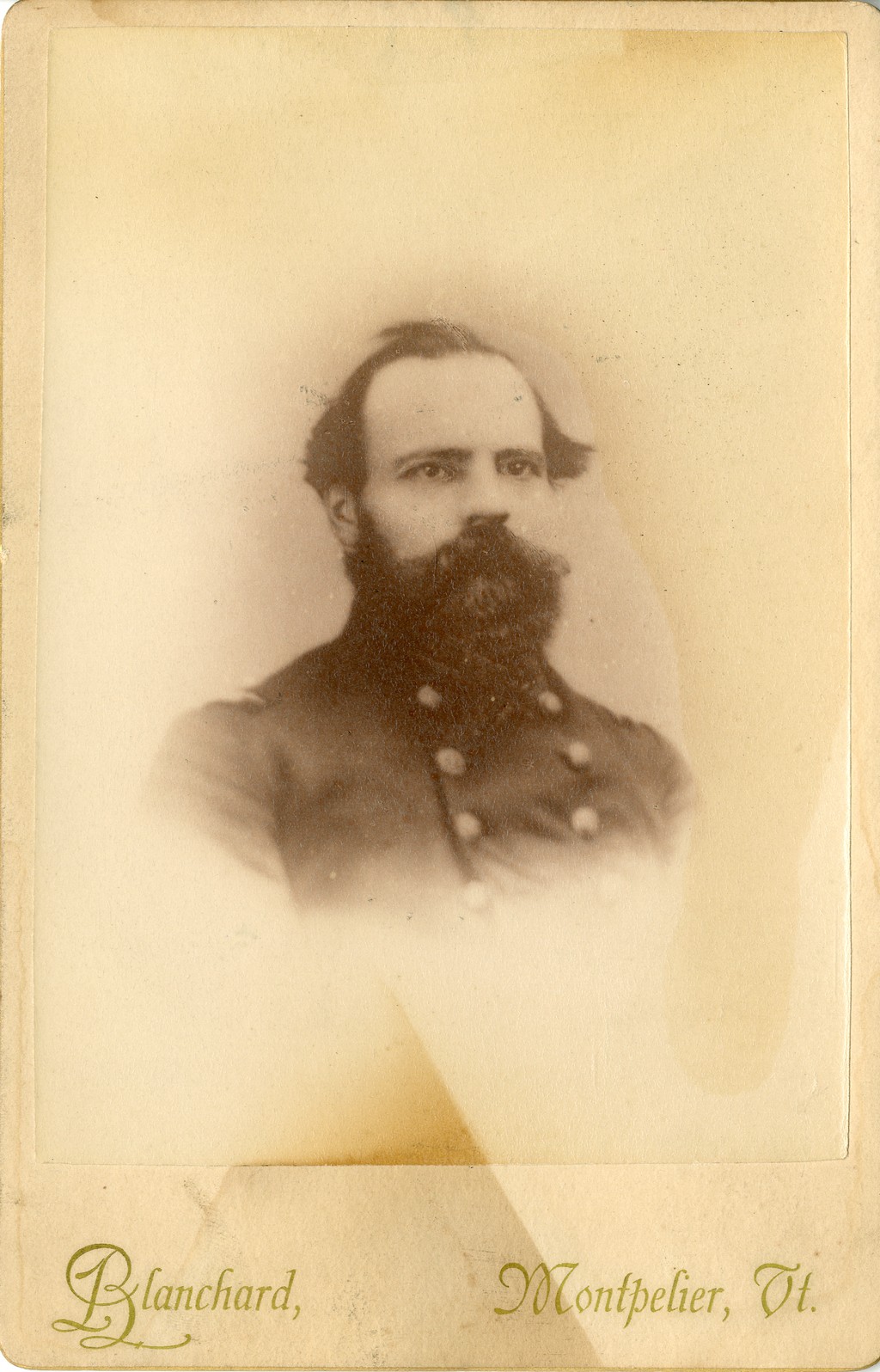 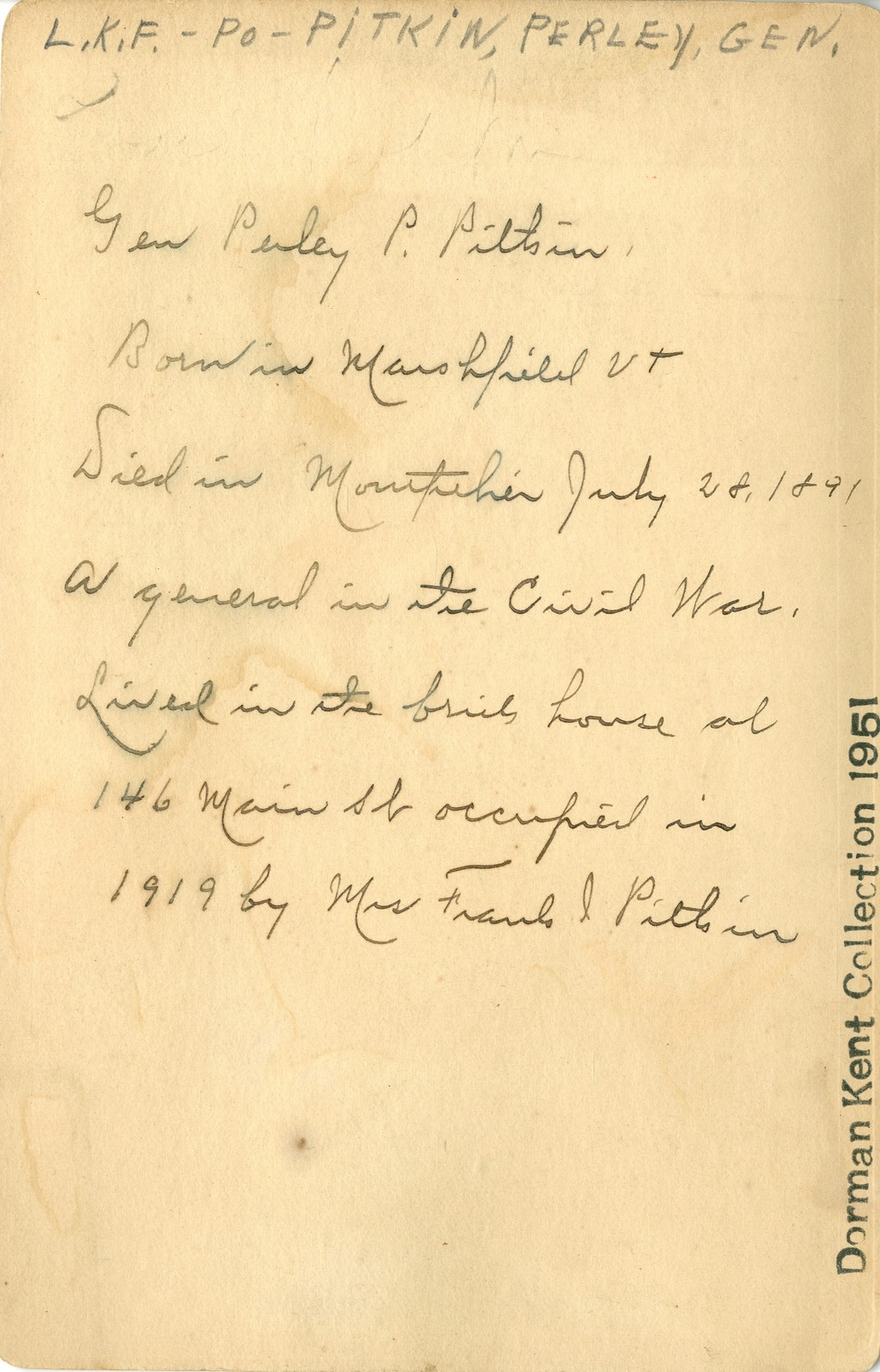 Perley Peabody PitkinGeneral Perley Peabody Pitkin, deceased, for six years quartermaster general of the state of Vermont, was born in Marshfield, Vermont, March 9, 1826, and was descended from a pioneer ancestry. Stephen Pitkin, grandfather of General Pitkin, was born and reared in East Hartford, Connecticut. In March 1795, he migrated to Vermont, settling in Marshfield, Washington county, where he redeemed a large farm from' the wilderness, and there resided for the remainder of his life. He was a man of energy and excellent business capacity and became a leader in the industrial, political and social affairs of the town. In 1802 he established the first sawmill in the village, while in 1818 he introduced the first gristmill, operating both successfully in connection with general farming. He had the honor of being the first representative from Marshfield to the state legislature, an office to which he was subsequently elected twelve times, and for several years he was also the assistant judge of the county court. Also interested in military affairs, he was elected in 1807 as captain of the first military company organized in Marshfield, in which he served so efficiently that he was subsequently promoted to the office of major of his regiment, a title by which he was familiarly known throughout the remainder of his life. He was united in marriage to Damasas Goodwin, and his death occurred in the year 1834. 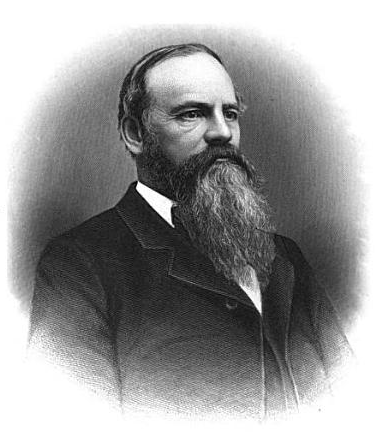 Truman Pitkin, father of General Pitkin, was born on the parental homestead in Marshfield, Vermont, April 24, 1800, and in his early life was engaged in milling, owning and operating a saw and grist mill, but during the last twenty-five years of his activity, he followed agricultural pursuits. On December 31, 1822, Mr. Pitkin married Rebecca P. Davis, a daughter of General Perley Davis, of Montpelier, Vermont, and after her death, which occurred September 17, 1847, Mr. Pitkin married Nancy Wing, daughter of Joseph Wing. General Davis was born March 31, 1766, in Oxford, Massachusetts, now known as Charlton. On May 4, 1787, he came to Vermont, becoming the first settler of what is now East Montpelier, where he cleared and improved a valuable estate, and there resided until his death. He was one of the leading citizens of this section of the state, and was very prominent in military circles, having been chosen in 1794 as captain of the first military company organized in that town, while in the same year he was made major of the regiment, which was composed of companies from that and the surrounding towns. In 1798 he was commissioned colonel, in the following year, 1799, was promoted to the rank of brigadier general and was one of the volunteers at the battle of Plattsburg, where he was an active participant. He took a keen interest in local and state affairs, having been especially interested in founding the town library and in promoting the cause of education, while on two occasions he represented his town in the state legislature. In 1794 General Davis married Rebecca Peabody, a daughter of Colonel Stephen Peabody, and seven daughters blessed their union. General Davis died April 14, 1848, survived by his widow, who passed away February 5, 1854.

Perley P. Pitkin resided on the home farm until he attained mature years, receiving his early education in the district schools, and his studies were completed in Washington county grammar school at Montpelier, Vermont. Making the journey to California in 1851, he remained in that state for three years, during which time he was successfully engaged in mining and trading, and on returning to the east settled in East Montpelier, which he represented in the state legislature in 1859 and 1860, having been a member of the special session of that body which convened at the breaking out of the Civil war. At once offering his services to the government, he was commissioned regimental quartermaster of the Second Vermont Volunteers, and was there for a time, when he was appointed brigade quartermaster of the First Vermont Brigade. In April, 1862, he was promoted to be assistant quartermaster of volunteers with the rank of captain, and reported Jo General Rufus Ingalls, chief quartermaster of the Army of the Potomac, -at White House, Virginia. The work assigned to Captain Pitkin was the receiving of supplies at the army base from the fleet of army vessels and distributing them to the several army corps. In this labor Captain Pitkin had under him over twelve hundred civilian employes at a time. When the army was withdrawn from the peninsula he was ordered to Washington with his brigade of subordinates and thence (during the Antietam campaign) to Harper's Ferry, where he was chief depot quartermaster in charge of all the supplies for the army. This most responsible position he held at the bases of supply of the army established successively at Warrenton Junction, Falmouth, Belle Plain, and Aquia Creek, Washington, Frederick, Maryland (during the Gettysburg campaign), and Alexandria, from which point the army was supplied during the winter of 1863-64, its principal supply station being at Brandy Station, fifty-seven miles from the base, with branch depots at Bealton and Culpepper. When General Grant's overland campaign began in May 1864, the surplus supplies having been sent back to Alexandria, Captain Pitkin was placed in chief charge of the immense train of four thousand wagons, which carried ten days' rations for the army, with ammunition and other supplies. While at Spottsylvania, Captain Pitkin was selected to be the bearer of despatches from General Grant to the war department, which could be entrusted only to a most responsible messenger. With an escort of regular cavalry, he made the journey to Washington and back in four days, and then resumed his duties as chief depot quartermaster at Belle Plain. Here, to the care of the enormous quantities of supplies which were provided for the further overland march of the army, were added the duties attending the arrival of thousands of recruits and reinforcements; the receipt of many thousands of prisoners, arriving from the front to be forwarded to Alexandria and Annapolis; and the care of the army of wounded and sick soldiers, on their way to the general hospitals. Captain Pitkin moved with the supply depot, successively to Port Royal on the Rappahannock, White House on the Pamunkey. and City Point on the James, where he remained as chief depot quartermaster during the summer of 1864. July 8, 1864, he was promoted to the rank of colonel and assistant quartermaster. During this period the army numbered upwards of one hundred thousand men, with fifty thousand horses and mules. For the subsistence of the former one hundred thousand pounds of bread, one hundred and twenty-five thousand pounds of meat, ten thousand pounds of coffee, ten thousand pounds of sugar, and, when obtainable, large quantities of vegetables, were furnished each day; while the latter consumed over six hundred thousand pounds of grain and an equal quantity of forage daily. Once in three or four months one hundred thousand pairs of shoes, and two hundred thousand pairs of stockings, and at a little longer period of time as many coats and pantaloons, and twice as many changes of under-clothing were distributed. For each periodical shoeing of the animals, Colonel Pitkin received and distributed two hundred thousand pounds of horseshoes. Add to all this the care and transportation of the enormous quantities of ordnance and surgical supplies required where armies of such magnitude were in constant collision, and it may be realized that the duties of the chief quartermaster in charge of the army base were such as could be borne only by a man of great physical vigor, as well as superior executive ability and untiring industry. They were performed by Colonel Pitkin with ability and fidelity which won for him the unvarying commendation of his superiors. The successive commanders of the army all recognized his value and relied on him with a confidence which was never disappointed. The opinion of his immediate superior is expressed in the annual report of General Rufus Ingalls, chief quartermaster of the Army of the Potomac for the year ending June 30, 1863, in the following words:

"To the quartermasters of this army, I feel under a great weight of indebtedness, especially to those who have had charge of the great depots. I have referred to them in the body of this report, still, I would be doing much injustice if I did not mention Captain P. P. Pitkin, assistant quartermaster, who has had charge of the great depots, and whose business for the year has been extremely heavy. He is a most meritorious, energetic and trustworthy officer." This is the highest praise accorded to any man in the report. In November 1864, after two years of such service, in positions second only to the highest in responsibility, and second to none in labor and care, Colonel Pitkin resigned his position in the army, to enter upon his duties as quartermaster general of the state of Vermont. Late in November 1864, the governor of Vermont insisted that Colonel Pitkin must return to take the important office of quartermaster general of the state, to which he had been unanimously elected by the legislature. Greatly to General Grant's regret, Colonel Pitkin obeyed his governor and resigned his office. He held the new office for the six following years, and then declined a re-election.

After his return from the war, General Pitkin resided in Montpelier and embarked with two partners in a new enterprise, the manufacture of sawmills, establishing a business that later developed into the Lane Manufacturing Company, of which he was at first manager. In 1888 he was elected president of the company, serving in that capacity until the time of his death. A public-spirited, loyal citizen, he was devoted to the interests of the town and county, and never shirked the responsibilities of office, for he served as selectman during the years 1868-70-74-77-7980, was a representative to the state legislature in 1872 and for many years was a trustee of the Washington county grammar school and president of the Montpelier school board. At the time of his death General Pitkin was officially connected with several institutions or organizations, being a director of the First National Hank, a position that he held continuously from his election in June, 1866; a director in the National Life Insurance Company, in which he had been a member of the finance committee since June, 1878; and was one of the commissioners of the Green Mountain Cemetery, being chosen to that office March 2, 1880.