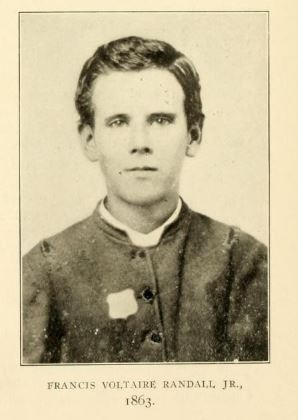 Randall, Francis C. 12 March 1924: "Francis C. Randall, better known as 'Jimmie," the youngest boy to enlist in the Union Army from Vermont during the Civil War, died last week at his home on Liberty Street, Montpelier, at the age of 72 years. He suffered a shock on Feb. 6, from which he could not recover. Mr. Randall was born in Northfield, Vt. 3 April 1851, son of Colonel Francis V. Randall, whose regiment he enlisted on 1 Jan. 1863, at the age of nine years and nine months. He was mustered out of service 15 July 1865. Recognition of his military service came late, for he received a year ago from the War Department in Washington, a medal for bravery, for carrying water to the wounded under fire in the Battle of Gettysburg. He served as a drummer boy in the 17th Vermont Infantry. Mr. Randall was wounded in the Battle of Gettysburg, and wore throughout his life, a silver plate in his head, put in by Army surgeons."