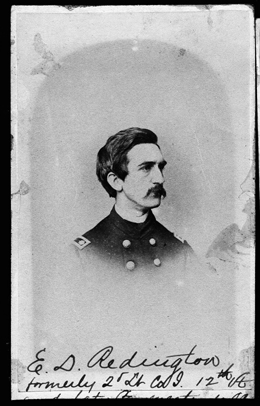 Mr. Redington was educated in the schools of Chelsea, and at the St. Johnsbury Academy, and graduated with the class of 1861 at Dartmouth College. After graduating, he became a teacher in St. Johnsbury Academy for a year. In the winter of 1863-'64 he served as assistant cashier of the Passumpsic Bank.

Mr. Redington is a Republican in politics, though while in Kansas he was the Prohibition candidate for mayor of Lawrence in 1873. In the same city he was a member of the school board from 1872 to 1875.

Mr. Redington was married twice, his first wife being Mary Ann, daughter of Ephraim and Mary Ann Chamberlain of St. Johnsbury, whom he married Nov. 15, 1864. From this union there are three children living: Lizzie Stearns, John Chase and Paul Goodwin (twins). Mrs. Redington died in April, 1880. May 18, 1882, he married Mary Julia, daughter of Ezra and Julia R. Towne of Topsfield, Mass., by whom he has one child: Theodore Towne.

Major Edward D. Redington, Died At Evanston, Ill, At the Age of 91.

Evanston, Ill., Oct. 10. - Major Edward Dana Redington, and up to the time of his death believed to have been the oldest living alumnus of Dartmouth college, died last night in a hospital. He was 91 years old and a native of Chelsea, Vt.

The death is reported of Edward D. Redington, a well-known native of Chelsea, in Evanston, Ill., Oct. 9. Mr. Redington was born in the house now owned by Mrs. Grace M. Bixby, Nov. 12., 1839. His father was cashier of the Chelsea bank, but left here during the son's boyhood to take a similar position in St. Johnsbury. Edward D. Studied at St. Johnsbury Academy and then went to Dartmouth college, where he graduated in 1861. He was one of the two last survivors of that class, no older class now having any living members.

He enlisted in the 12th Vermont Regiment, a Civil war organization which had many members in this locality, and was promoted to second lieutenant. After the expiration of his term of enlistment he was appointed additional paymaster of volunteers with the rank of major, and served until 1866. For many y ears he was in the insurance business in Chicago, living in Evanston, and went regularly to his office until not so very long ago. From 1895 to 1905 he was a trustee of Dartmouth, another native of Chelsea, Rev. William H. Davis, being also a trustee during part of the same period. He was prominent in the counsels of the Congregational church in this city and state. He was twice married, surviving both his wives. Three sons, all of them graduates of Dartmouth, are living, and one or two daughters. A grandson is now a student at the college.