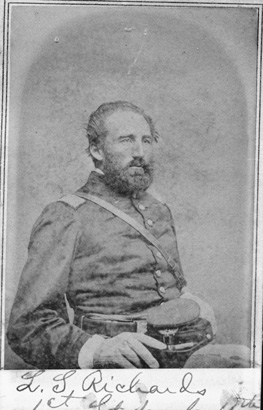 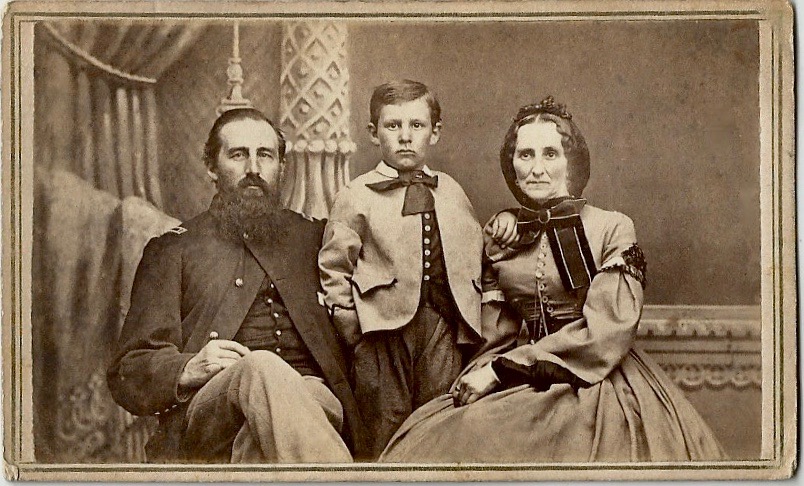 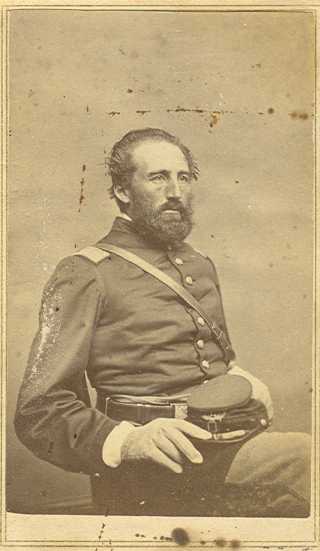 FROM A SOUTHERN PRISON

The following is a portion of a letter received from Lt. Richards by his wife. It will be read with interest.

I have long been waiting for a chance to forward you a letter by some other way than by rebel mail. And this is the first chance, so I will improve it, and write some things that would be considered contraband. We have been and are still treated worse than any man north would treat a dumb beast. I have not time nor space to tell you all I would like to, but I will give you a faint idea of our present circumstance It is now about two months since we were brought to this place. It was on the 5th of Oct. that we left Charleston. We were stowed into freight cars without any seats about 40 to a car and remained in that situation one day and night. The next morning we were turned into a small field like cattle. About sundown there came a heavy shower which completely drenched us, and we had to remain in this condition all night. I did not lie down this or the previous night but sat in my chair which I made in Savannah. On the 7th we were marched about two miles from the city to our present camp, which is an old field with young growth of pines which made good shade for us; and not far away is a small brook where we can get plenty of water. We were turned in here without any shelter except the trees, or axes, or cooking utensils of any kind. But fortunately, the officers had articles that they had purchased and brought along. They have now issued us 12 axes and 30 sheet iron pails, holding about 12 quarts each, for 1500 officers. Most of us have built little shanties of poles, brush, and mud, so we are to some extent protected from the storms and cold weather. Our rations are of the very poorest quality and entirely inadequate to our wants. We have had no meat or grease of any kind issued to us for the last two months. I would be glad to get a piece of mule or horse meat. Our rations are composed of corn meal (not sifted and usually musty), rice or sorghum, with very little salt, --- we have three or four times had a little wheat flour, say a pint full to each man for five days. But we fix it up in various ways, so with a good appetite, anything will relish. We have the privilege of purchasing articles of food at rebel prices; poor beef, $300 lb., 1 lb. pork, $7.00 per lib, little small loaves of bread, $1.50, potatoes, $20 to $40 per bushel, and everything else in proportion.

It is not a rare thing for an officer to be shot down by the guard. One has been shot dead while I am writing this, the guard claiming the officer was outside the limits, but such was not the case.

Officers have been escaping from here at a great rate. More than 200 have escaped, and most of them made their way to East Tennessee. Some of them have been recaptured and brought back, I think not more than 100, but how many of them will reach our lines it is impossible to tell. It is reported that many are murdered while crossing the mountains by bushwhackers, and they are often liable to be hunted down and run down by blood-hounds, besides they suffer from fatigue and exposure of every kind, and the distance is 240 miles to our line, I think it is a very hazardous undertaking.

We have big rumors about Sherman raiding through this section of the Confederacy, and we think it possible that he may relieve us. Furthermore we are in full faith that that rotten institution is on its last legs. We know that the rebels here are trembling in their shoes, and many of them (the soldiers) are not backward in expressing their ideas. We all rejoice over the re-election of Abraham Lincoln, for it shows that the North is heart and hand putting down the rebellion and sustaining our Government. His re-election is better than a great victory in the field.

We get no Northern papers, and but few rebel ones, as they are afraid to let them come in, fearing that we shall learn the location of the army, and make a break for it. We have to pay 50 cents for a little half sheet filled with the lies and auction sales of negroes. It seems they are very anxious to dispose of that kind of stock even at reduced prices.

We drew rations last night for five days and I will tell you just what the amount is for each man; 1 pint of wheat flour, 2 quarts of corn meal, ˝ pint of rice, 2 tablespoons of salt,, and 1 pint of sorghum, all told. You see to divide these into 10 meals (as we don't eat but twice a day), and the quantity is very small. But there will be an end to this, and the Wrath of God will rain down on these miserable, rotten-hearted --- that are now in open rebellion to our Government.

Maj. Fleming is here, also Lt. Amherst Morse, and Lt. Hartwell of the 11th Vermont. They are well.

Lester S. Richards passed away at his home in this village August 13. Mr. Richards was born in Beacon, Clinton County. New York, March 1, 1825, son of Joseph and Eliza Brooks Richards, one of a family of five children. He is survived by one sister, Mrs. James Conant, of South Framingham, Mass. Mr. Richards was thrice married, his first wife was Nancy G. Stanley of North Monroe, N. H. Three children were born to them, Willie and George, who died in early childhood, and Oliver S., who died in 1893. Mrs. Richards died May 13, 1872. Mr. Richards was married November 14, 1872, to Cynthia T. Reed of Concord. Mrs. Richards passed away April 18, 1884. July 7, 1885, he was married to Hattie L. Haviland, who survives him. Most of his life has been spent in this and neighboring towns. He was interested in the lumber business at Miles Pond at one time. He was employed as agent for the Singer Sewing Machine company at St. Johnsbury, going from there to a farm in Kirby where he remained until about fifteen years ago, when he came to this place and became engaged in the mercantile business in which he remained as long as his eyesight failed him ten years ago. For eight years he was totally blind, the past two years failing rapidly in body and mind until he passed away of exhaustion at the advanced age of 85 years, 5 months and 11 days. During the years he was so dependent upon others he was most tenderly cared for by his wife and step son.

Mr. Richards served in the war of the Rebellion, enlisting at St. Johnsbury September 12, 1862, in Co. A, 11th Vt. Heavy Artillery as 2nd lieutenant and was afterwards promoted to 1st lieutenant. He was engaged in several battles, among them Antietam, Petersburg and Cold Harbor. AT Weldon Railroad he was taken prisoner and spent eight months and seven days in Libby and other southern prisons, being released March 1, 1865. Broken in health he had not sufficiently recovered to return before peace was declared.

The funeral was held at his late home Sunday afternoon at 2 o'clock, Rev. L. F. Fortney of Plainfield, a former pastor of the Universalist church here, officiating, assisted by Rev. Grant Van Blarcom and Rev. E. P. Lee of Waterford. Rev. Mr. Lee was a comrade of Mr. Richards' in the army.

The flower offerings were many and beautiful and testified to the esteem in which the deceased was held. Woodbury G.A.R. and W.R.C. attended in a body and six comrades C. L. Stacy, O. B. Cutting, W. C. Pratt, H. A. Joslyn, J. K. Bonnett, and Andrew Morgan acted as pall bearers. The interment was in the family lot in the village cemetery.