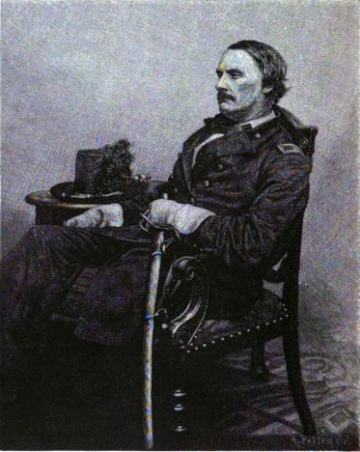 Israel B. Richardson, a major general of volunteers in the United States service, born at Burlington, Vt., in 1819, died at Sharpsburg, Md., Nov. 3, 1862. He was a descendant of the Revolutionary hero, Gen. Israel Putnam, graduated at West Point in 1841, was appointed 2d lieutenant in the 3d infantry, and 1st lieutenant Sept. 21, 1846. He distinguished himself in nearly every important battle during the Mexican War; was brevetted captain for gallant and meritorious conduct at Contreras and Churubusco, and major for gallantry at Chapultepec; and so distinguished himself for bravery that he was known in the army by the sobriquet of "Fighting Dick." In March, 1851, he was promoted to a captaincy. In 1855 he left the army and retired to private life in Michigan. Upon the commencement of the late rebellion he promptly offered himself again to the Government, organized a regiment, the 2d Michigan volunteers, of which he was made colonel, and soon after was placed in command of a brigade, with which he covered the retreat of the army at Bull Run. His commission as brigadier-general dated back to May 12, 1861. At the battle of the Chickahominy he commanded a division of Gen. Sumner's corps, and won much honor upon that occasion. He received his commission of major-general July 4, 1862; distinguished himself at the battles of South Mountain and Antietam, in the latter of which he received the wound causing his death.