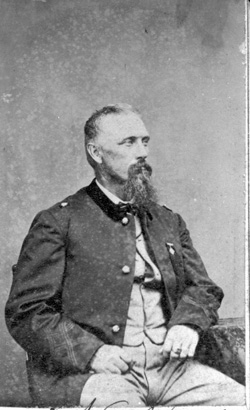 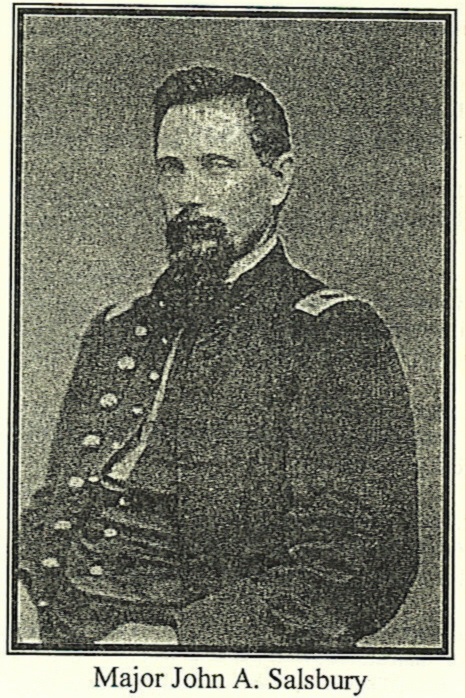 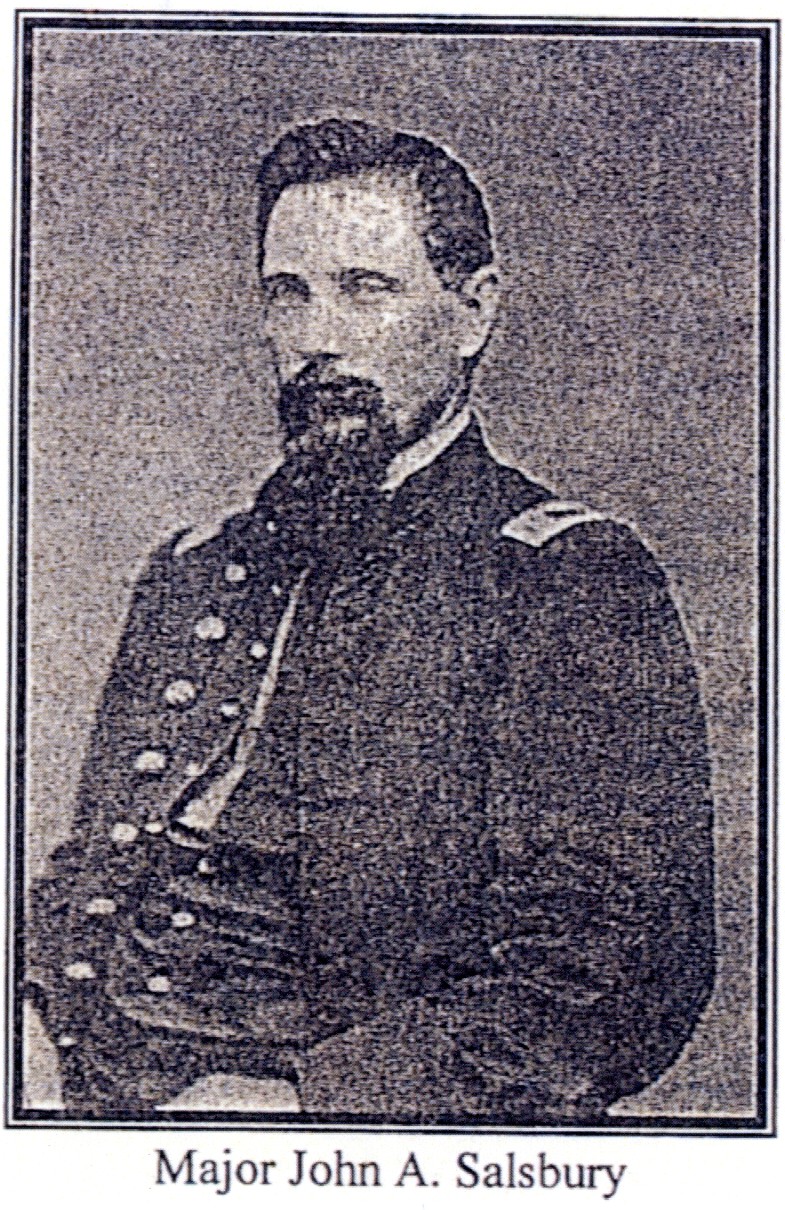 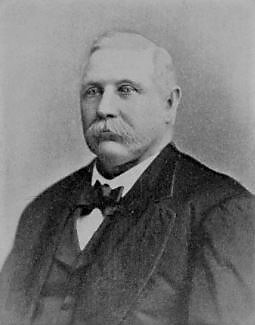 The death of Major John A. Salsbury, which occurred at 7 o'clock Sunday morning, removes from our midst a native of Rutland county, who was an esteemed citizen and a gallant soldier. Major Salsbury was born in Tinmouth, August 20, 1827, and was consequently 59 years and 7 months of age. He was the youngest son of Elias and Fanny Livingstone Salsbury, and having received a common school education, lived the life of a farmer's boy until he reached the age of 25, when he made the voyage around the Horn to California, arriving there after a passage of 102 days. He remained there two years, a part of the time in the mines, and returning home, started almost immediately for the West again, going overland to Iowa, where he remained three years. He returned again to Tinmouth, and at the outbreak of the civil war, enlisted in the 10th Vermont regiment and went out as captain of Co. I., serving throughout the war with great bravery. He was in 19 hard-fought battles, and at Cold Harbor was brevetted major for gallant conduct, receiving his commission shortly after. At the close of the war he brought home the shattered remnant of the battle-scarred 10th. He was associated with Major Haselton in the ownership of the Barnes house at West Rutland for two years, after the war, and subsequently from 1868 to 1875 was proprietor of the Old Central house, which stood upon the Clement bank corner until it was burned in 1875. The Major then went to Colorado, and from thence to Washington, where for seven years he held a responsible position in the office of the Knox Express Co. He married in 1848 Miss Betsey A. Capron of Tinmouth, and they had one son, who is now in Denver, Col. During the war the Major received a sunstroke from which he never full recovered, and in the last year of his residence in Washington the results of the former trouble were manifest in a heart difficulty and several strokes of paralysis, the most severe of these occurring in November, 1885. In the spring of 1886 he was brought to Rutland, there being little hope at that time of recovery. Since then he has needed constant care, and has received the devoted and untiring attention of his faithful wife, who for over a year has remained by his bedside nearly all the time, day and night. Throughout his illness he has retained his faculties and was conscious up to within a very short time before his death. The immediate cause of death was a paralytic shock on Wednesday night, from which his enfeebled condition failed to rally, and at 7 o'clock on Sunday morning, as stated, he passed peacefully away. He leaves a widow, and adult son and three sisters. Major Salsbury was a charter member of Hiram Lodge of Masons of West Rutland and Roberts Post, No. 14, G.A.R., though when he went to Washington he took a transfer card, which he never deposited with any other post.

The funeral will be held on Wednesday at 1.30 o'clock p.m., with services at his late residence, No. 12 Crescent street. Members of both organizations mentioned above will attend.

Major John A. Salsbury, who has so long lingered at his home on Crescent street, reached the supreme moment yesterday morning at 7 o'clock, aged 59 years and 7 months. He was the youngest son of Elias Salsbury, esq., so long one of the prominent citizens of the old historic town of Tinmouth, and on the side of his mother, a Livingstone, a family of equal rank. He went out a captain in the tenth Vermont regiment and was duly promoted to major for gallantry on the field of battle, and from Conrad's Ferry, onward through shot and shell, he stood stalwart and firm in the continuous shock of that protracted war. But I will not anticipate. If his cherished wish that his chaplain attend his funeral, of which notice will be given, is gratified, full justice will be done his memory by one who knows whereof he speaks. The widow, one son and three sisters survive this great family bereavement. I stood by his cradle, I follow his hearse. - A REMOTE KINSMAN.

The funeral of the late Major John A. Salsbury took place yesterday afternoon at the residence of Mr. Morgan Winn, No. 12 Crescent street, in the presence of a large gathering of relatives and friends, including a delegation of Roberts Post G.A.R. Rev. George W. Phillips officiated and the Rutland Octette club rendered vocal selections. The services began with singing "The Funeral Bell" by the club, followed by scripture readings and a brief address by Mr. Phillips. It had been the earnest wish of the deceased that Chaplain Haynes of the 10th Vermont regiment officiate at his funeral, but circumstances made it impossible for him to come to Rutland at this time and he wrote an earnest letter from his home in Meadville, Pa. This was read by Mr. Phillips. The letter paid a high tribute to the memory of the deceased, referring to the many admirable traits noted in his character, to his gallantry as a soldier, his love of country and his patience and fortitude in his long and trying sickness. Following the reading of the letter the club sang "Nearer My God to Thee," and after the invocation by Mr. Phillips they sang "Remember Me, Oh Mighty One," closing the service. The interment was in Evergreen cemetery. The bearers were Messrs. S.E. Burnham, Charles Clark, J.C. Dunn, Henry W. Kingsley, Hiram A. Smith, William R. Gilmore, J.E. Post and Harley G. Sheldon. Col. John A. Sheldon had charge of the funeral arrangements. There were many beautiful floral tributes, among them a design representing a pillow, and another representing the Masonic square and compass.

Major J. A. Salisbury of the 10th Vermont, who died in Rutland last week, aged 59 years, was lieutenant of Company C, 10th Regiment, promoted to captain of company I November 8, 1862; brevetted major October 19, 1864, for gallantry before Richmond and in the Shenandoah Valley; was mustered out as captain of company I, June 22,1865.