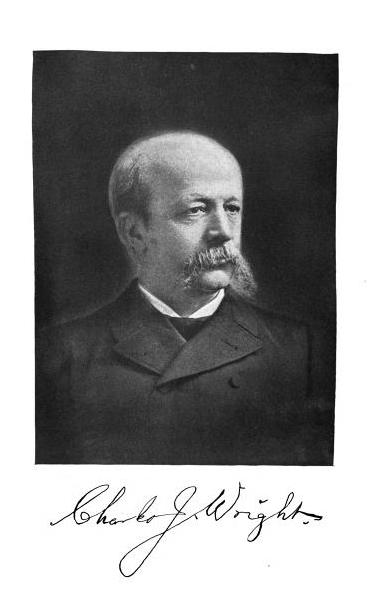 Charles Jefferson first child of Larned M. and Sarah (Blake) Wright, was born in St. Johnsbury, Vermont, October 21, 1839. He was educated at Dwight School, Boston; Buffalo (New York) high school, and was graduated from Hobart College, class of 1861. He early enlisted in the Union army as a private in Company G, Sixteenth New Hampshire Volunteers, recruited at Nashua, New Hampshire. He was promoted to sergeant, and served through the New Orleans, Red River, and Port Hudson campaigns, under Generals Butler and Banks. He was selected by Admiral Farragut as bearer of dispatches, and for his services was commissioned lieutenant and recommended for a commission in the United States regular army. This promotion came in the form of a lieutenant-colonel's commission in the Thirty-ninth Regiment of Colored Troops. At the beginning of the Wilderness campaign he was transferred to the Twenty-seventh Infantry (colored) which regiment he led through all the battles of that campaign, being wounded at the Petersburg Mine and later at Fort Fisher. On March 13, 1865, Lieutenant-Colonel Wright was brewetted colonel for "gallant and meritorious services during the war." He was employed during the period of reconstruction, and did not return from the service until 1866.

Previous to the war, and then only sixteen, Mr. Wright was principal of a school at Grand Isle, near Niagara Falls, and after retiring from military life he resumed the profession of teaching. For three years he taught in the Milton Classical Institute at Milton, Pennsylvania, his term of service ending with the destruction of the Institute by fire. He next taught at Ossinning, New York, later was vice-principal of the Yonkers (New York) School, after which he began a term of fifteen years as principal of the Peekskill Military Academy, seeing that institution grow from an attendance of seven cadets to one hundred and forty. Colonel Wright now decided on a school of which he should be the real as well as the nominal head. He proceeded to establish at Cornwall, New York, a military school known as the New York Military Academy, of which he is the owner and president of the faculty. This school has now been in successful operation for twelve years. In the year 1900 Colonel Wright secured the land and building at Freehold, New Jersey, known as the Freehold Institute, Military Academy, an institution that enrolls annually one hundred boys. Colonel Wright is superintendent, president of the board of trustees, and commandant of the Cadet Battalion. He has recently acquired another school at Matteawan, New York, which he will conduct in conjunction with his other two well established and popular academies.

Colonel Wright is an active Republican, and a campaign orator of force and vigor. He formerly served his party freely "on the stump" during campaigns. He is a member of the Military Order of the Loyal Legion, the Society of the Army of the Potomac, and the Sons of the Revolution. At the dedication of a monument erected on the battlefield of Monmouth, Colonel Wright was one of the chosen orators. He is a member of Lafayette Post, G.A.R., New York City, of the Army and Navy Club, the Arts Club, and the Artists' Aid Society. He is a worldwide traveler, and his home is beautified and his artistic taste gratified by numerous beautiful paintings and art treasures found in foreign lands. He is a member of the Protestant Episcopal Church, and serves the Freehold congregation as vestryman.

Colonel Wright married, in 1866, Margaret Bard, daughter of James M. Bard, of New York, of an old Pennsylvania family. Her father was at one time recorder of Westchester county, New York.