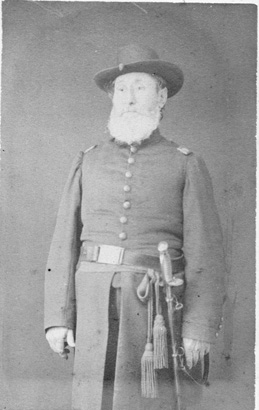 Captain David L. Sharpley of Burlington, aged 82, died Saturday. He served a year in Company G, 2d Vt. Vols., in the Civil War and was picked up for dead on the battlefield of Bull Run. He had three sons in the same company.

David Lee Sharpley died Saturday at the home of his daughter, Mrs. Mary A. Trick, 144 North Union Street, after an illness of about one month. The funeral occurred Monday from the house at two o'clock, with interment in Green Mount Cemetery.

Captain Sharpley was born in Edinburg, Scotland Nov. 11, 1810, being at the time of his death 92 years of age. In 1812 his parents came to Quebec, and his early life was spent in that city. For a time he followed the trade of tailor, and in 1850 came to Winooski, in which place and this city he has resided since.

At the outbreak of the War of the Rebellion, he organized and drilled a company in this city, and served through the war as Captain of Company G., Second Vermont Volunteers. His three sons were with him in the army, and he was wounded at the battle of Bull Run.

Since 1891 he has lived with Mrs. Trick aside from whom he is survived by two sons, Frank Sharply, of this city, and John Sharpley of Essex Center, also 23 grandchildren, and four great-grandchildren.