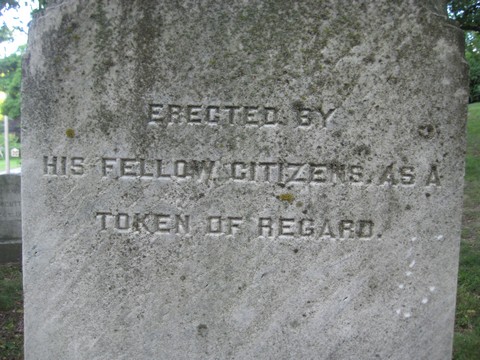 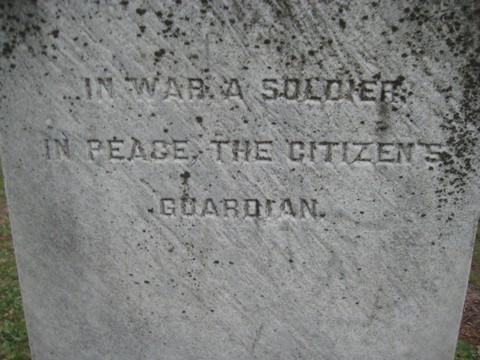 Having been closely associated with the subject of this sketch for a considerable period of his service in the 25th Michigan during the late war, it is but a fitting tribute of respect to his memory that the following statement is given.

Benjamin F. Orcutt was born at Roxbury, Vt., Feb. 9, 1815, where he obtained such an education as the common schools of the country afforded, supplemented by a few terms in the academy at Randolph.

At the age of nineteen his enterprising nature started him westward, bringing up for a few months in Detroit, thence a year in Chicago in its early days. From there he returned to Michigan, spending a year at Allegan; then, in 1837, came to Kalamazoo, which place he ever after made his home.

Being of an active and industrious nature, he turned his attention to house building, which business he followed with success for many years. While pursuing this occupaiion he was elected in 1841 to the office of Constable. In his election to this office he not only struck the natural bent of his inclination, but the profession also that he was so highly fitted by nature to execute—the mandates of the civil law. His services were so highly appreciated in the execution of his duties that he was kept in the public service, civil and military, for nearly the whole of his life thereafter.

Michigan sent one regiment to the Mexican war, in which he went, serving as 1st Sergt. in the company of Capt. Curtenius. This was the beginning of an after military record that might well be envied by anyone. He was appointed and served as Deputy U. S. Marshall for a number of years, until in 1854 he was elected to the office of Sheriff of Kalamazoo County, securing two continuous terms in that office. He had become such a favorite for public honors that people of all parties dropped their partisanship and united in voting him into office at every appearance he made as a candidate, though he cast his principles in unison with those of the republican party from its first beginning.

Having seen service in the Mexican war he was anxious to engage in the Union cause and against the rebellion. From the military experience he had already passed through he thought himself qualified for a leader in some capacity, and to that end made an application for one in the 25th Michigan Infantry, wherein, as we have noted in the preceding pages of this work, he was duly commissioned to the office of Lieutenant Colonel, and remained in that capacity during its full term of service.

His services were connected and interwoven with the duties performed by that regiment when present with it. The war records of that regiment are the records of his own war services. 'At one time the regiment was divided, the one half rendering services in the field from the eleventh of June to the eighteenth of August, 1863, the other half doing garrison, guard and provost duty at Louisville, Ky. He served with the latter half, during which time he was appointed as president upon a board of court martial, which continued its. sittings at Louisville until the following April, when he returned to his regimental charge again. It was then in East Tennessee, in preparation for the Atlanta Campaign. This was in the year 1864, and was truly a year of heavy battles.

These began in the fore part of May. On the fourteenth and fifteenth days of May came the battle of Resaca, wherein the lines of battle placed the 25th Michigan in such a position that it was badly worsted, and with a heavy loss. Col. Orcutt commanded his regiment in its charge upon the works of the enemy and was with it till it was broken up and could go no further. He was in the front line of battle and was the only field officer known to me who reached the creek, as related in the foregoing story, and well up under the rebel works.

The campaign against Atlanta was a trying and tedious one, through the hottest part of the year. He did his duty . earnestly and faithfully until after the crossing of the Chattahoochee, when his labors proved too much for him and he had to retire, not being able to rejoin his regiment again till after the fall of Atlanta. He was then in command of the 25th and present with it again till the day before the army moved out from Nashville against the rebel forces that lay before that city, when he was granted a sick leave of absence and had left, much to his regret, that he had been unable to take a share in that great battle. Soon afterwards the 25th Michigan was transferred from its operations in Tennessee to North Carolina, by the way of Washington, where he again rejoined the regiment about the first of February, 1865, and continued in command of it until the close of the war.

Of his post bellum career but little need be said. It forms but a short chapter, ending in a shocking tragedy, while earnestly engaged in the public service. It is new nearly a generation since that sad occurrence transpired, and it is still fresh in the minds of many of the citizens of Kalamazoo. He was again elected to the office of Sheriff in the county in 1866, and on the following January took in charge the then county jail—an old, dilapidated and very insecure structure, requiring constant guarding to safely keep the prisoners confined there from breaking out.

Towards the latter part of 1867 several desperate characters were confined in the jail, and were members of a gang that were still at large and bent on the release of their confederates in prison. An attempt was made by the gang early on the morning of December 3. The noise of the outsiders in their work aroused Col. Orcutt, who, as always, prompt in the line of duty, was immediately out and after those whom he supposed were escaping prisoners. In the darkness he followed closely upon two persons, whom he ordered to halt. But they soon separated, leaving but one for him to follow up. After firing two ineffectual shots at him, the criminal turned at the head of the alley near the jail, shot the colonel with deadly effect, and made his escape. He got up, walked back to the jail, and when his wife asked him if he had killed the prisoner, said, "No, but I think he has killed me." And so it was, for after a few days of intense suffering he ceased to breathe on the 12th of December, 1867.

Thus ended the life of a useful and patriotic citizen in his devotion to duty, and as a war-horse, died in the harness. The public fully appreciated his value as a citizen and an officer by closing up and draping in mourning all places of business and turning out in an immense concourse in attendance to pay their respects in the last sad rites at the funeral and burial services. He was married in 1855 to Miss E. A. Swaddle of Charleston, who, with his three sons, still survive him.