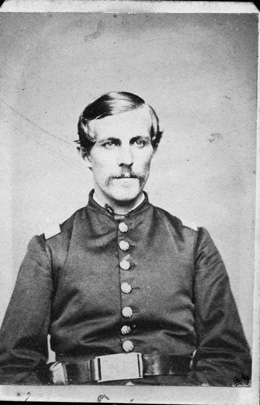 Capt. Louis McD. Smith, for several years past a deputy collector of customs at St. Albans who has been ailing for about six weeks past, died at the residence of his sister in that village on Friday, December 9. Capt. Smith enlisted in Company C, First Regiment Vermont Volunteers, May 2, 1861, and was appointed a sergeant. After the expiration of his term of service with the First Regiment, he enlisted in Company A of the Fifth and was commissioned second lieutenant Sept. 3, 1861. At the battle of Savage Station June 29, 1862, he was wounded and taken prisoner, and was paroled on the 29th of July in the same year. He was mustered out of service Dec. 31. 1862, and subsequently, at the solicitations of Gov. Smith, accepted a commission as captain of company E of the Fifth regiment. He was afterward commissioned as major, but did not accept, and was finally mustered out of service Sept. 16, 1864. He was a member of the Commandery of Vermont, Loyal Legion, a member of Baxter Post, G. A. R., Newport; of Champlain chapter No. 1, R. A. M.,; and of Franklin lodge No. 4, F. and A. M.

The Messenger says of him, "Capt. Smith was a man of generous impulses and pure motives. Never physically strong since his brilliant service in the field, he met the varied responsibilities of life with a courage and fortitude characteristic of the man. Faithful in the discharge of every duty, he gained the confidence and respect of all, and in a marked degree had the sincere esteem and loving regard of a large circle of friends. The various organizations of which he was a cherished member will remember him as a comrade and companion zealous for the welfare of his associates in office, his many friends and his immediate family, his death is a loss sad and untimely."