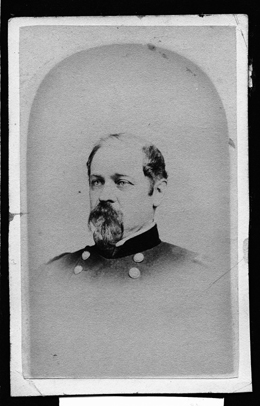 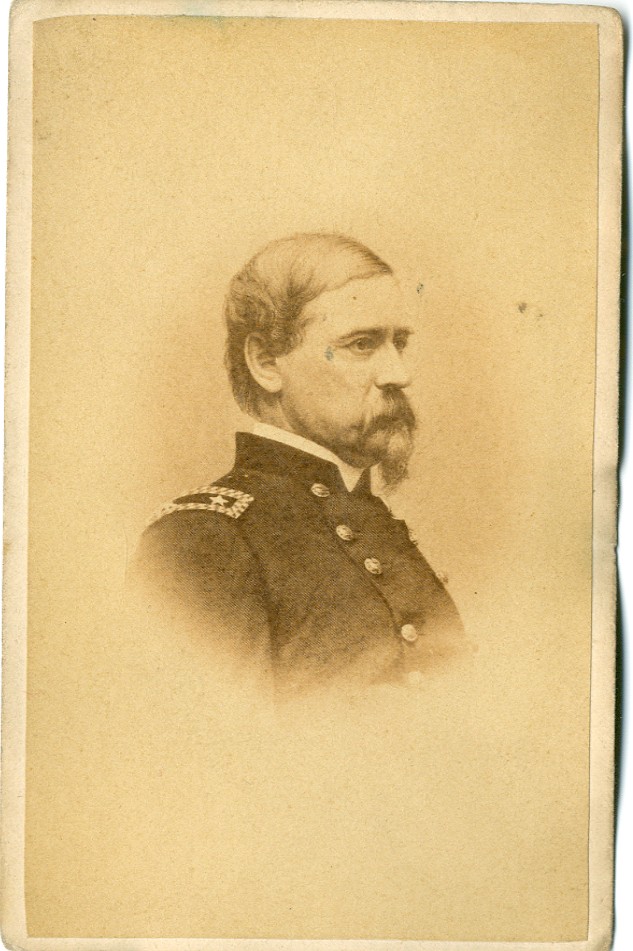 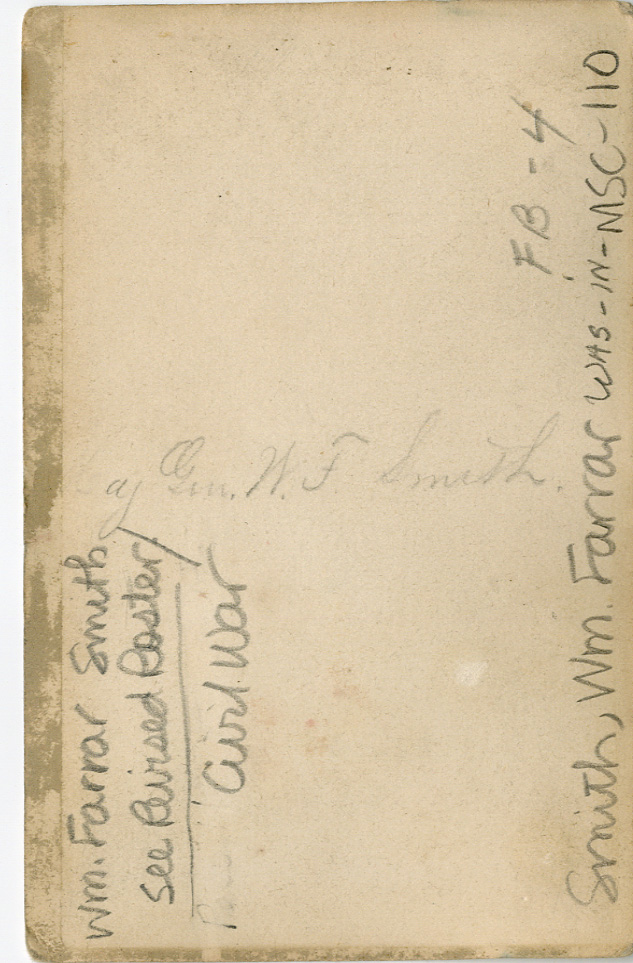 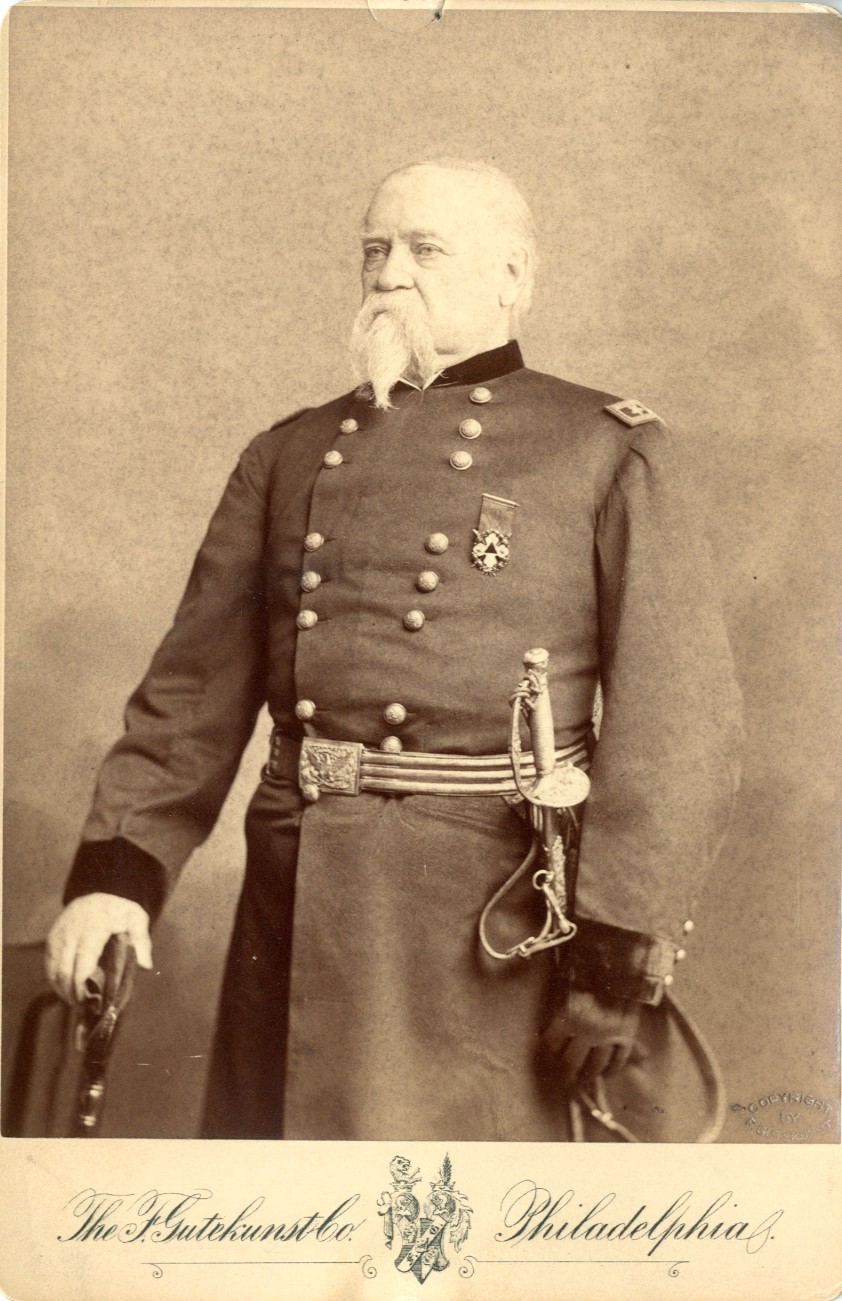 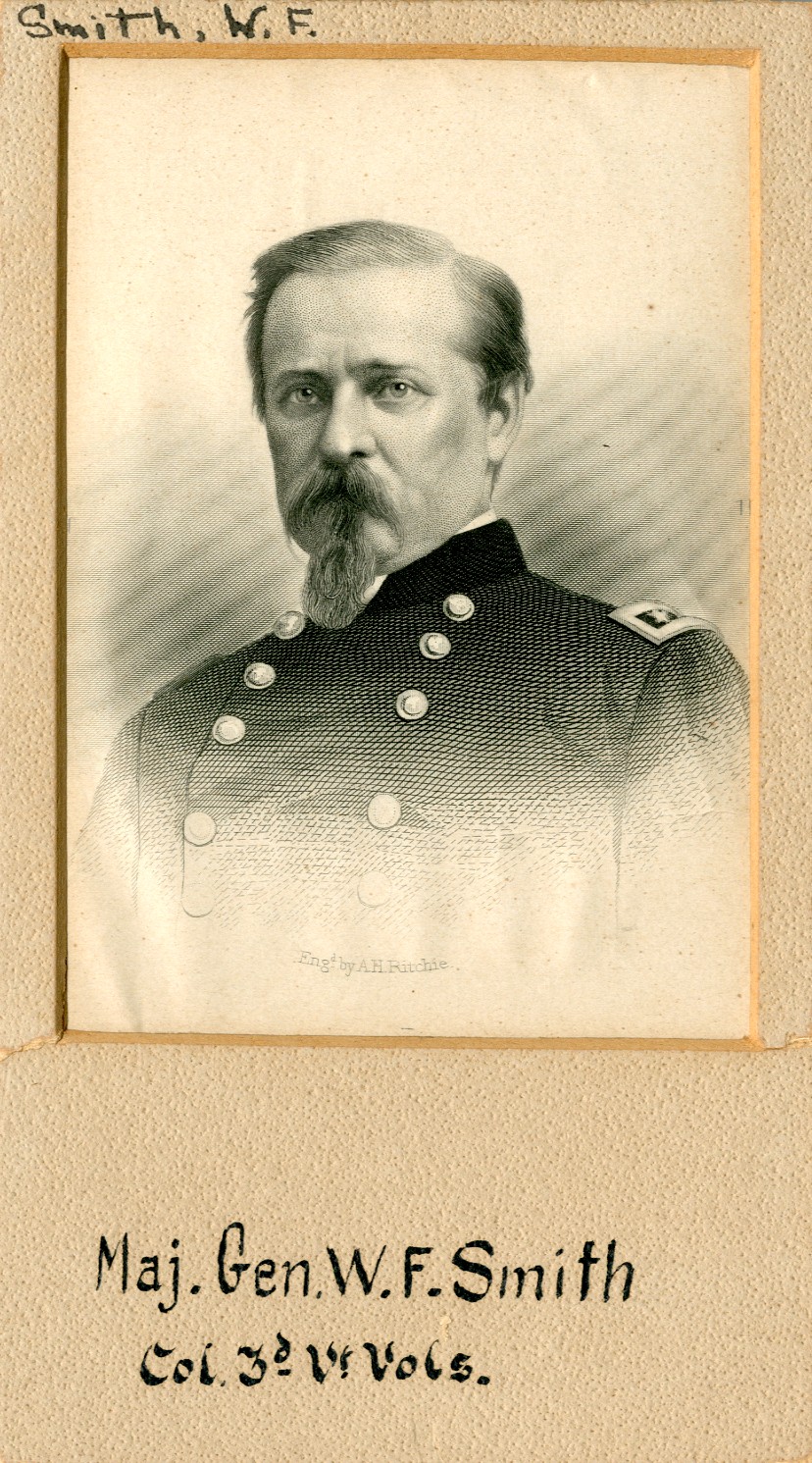 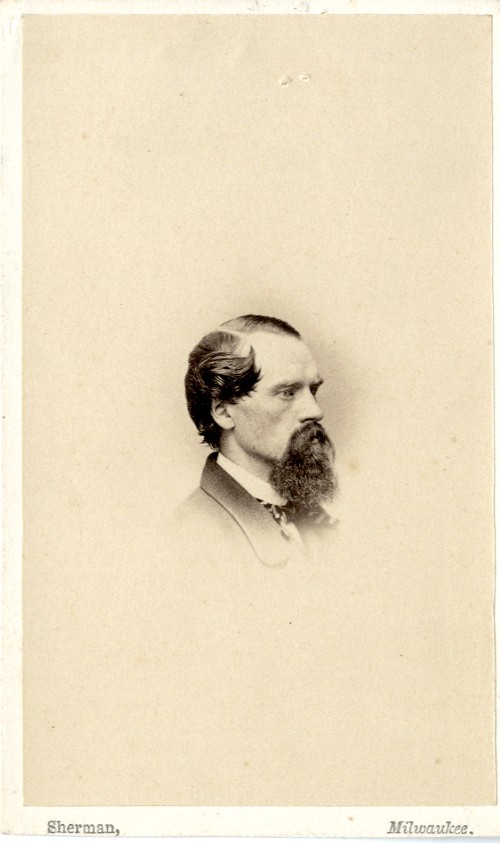 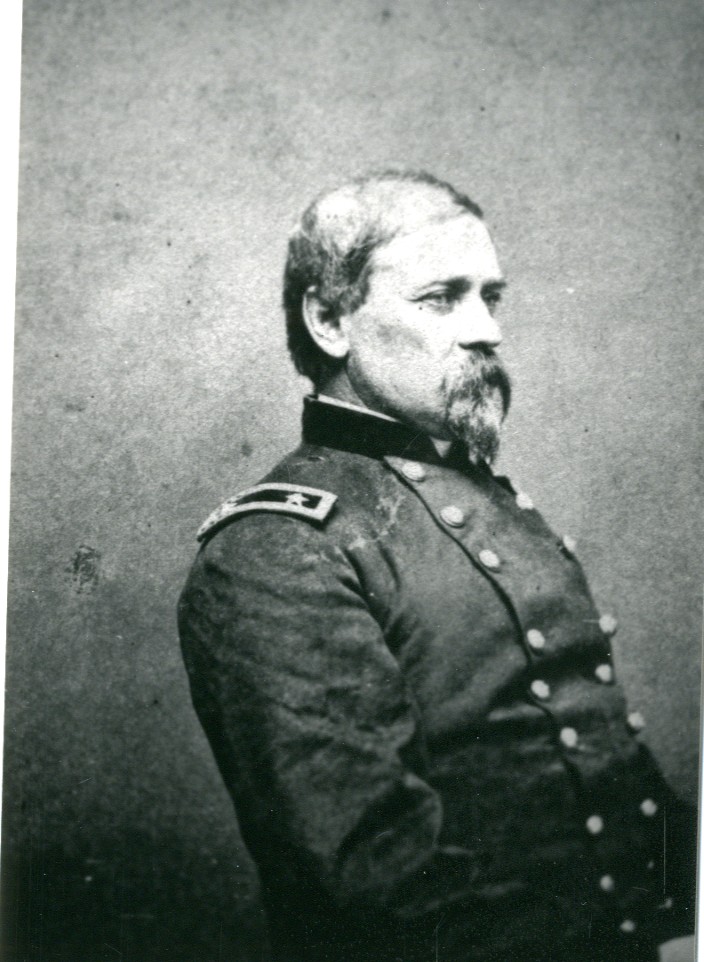 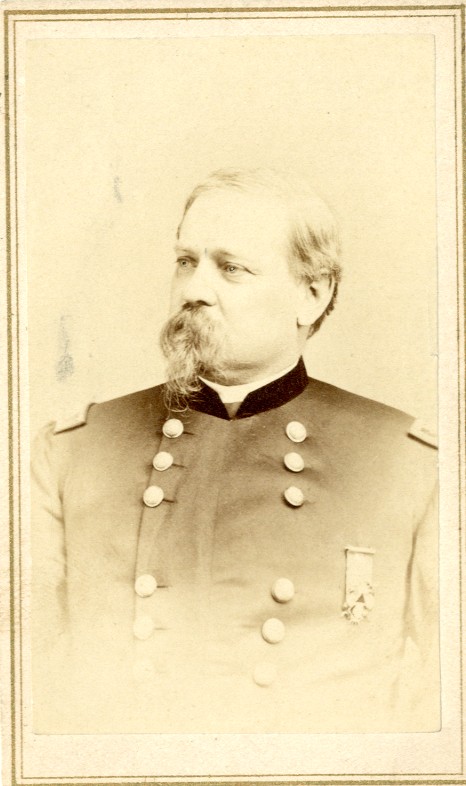 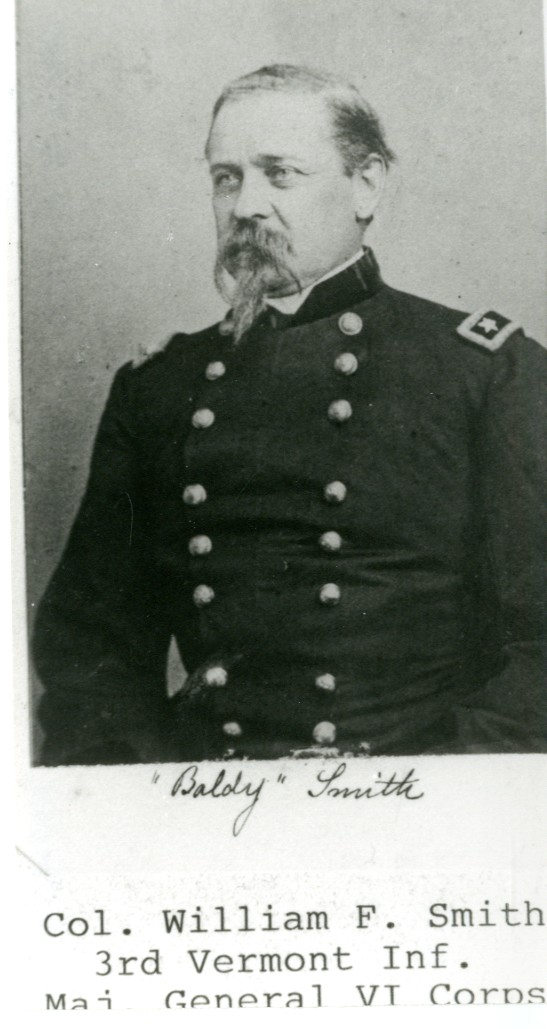 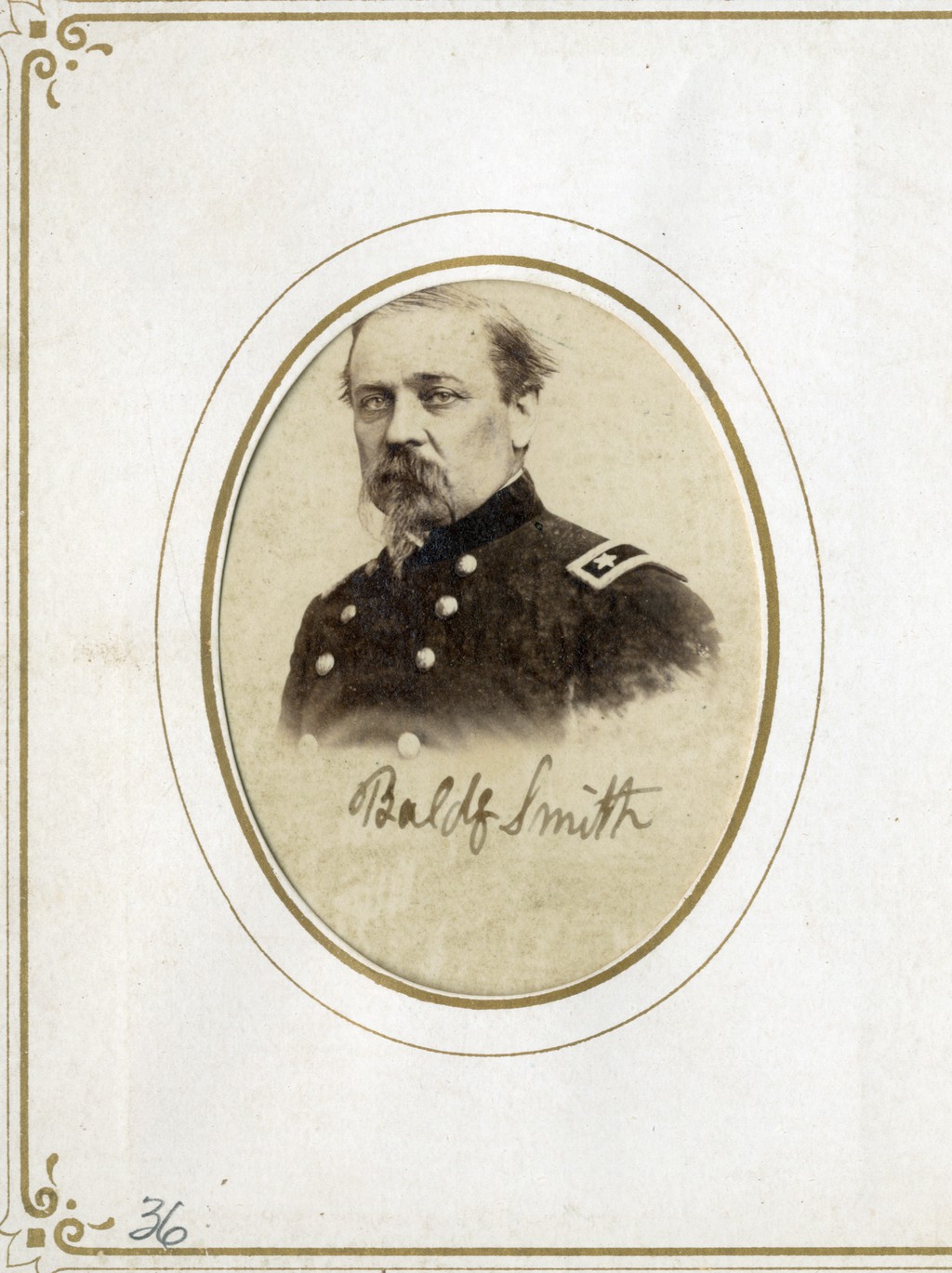 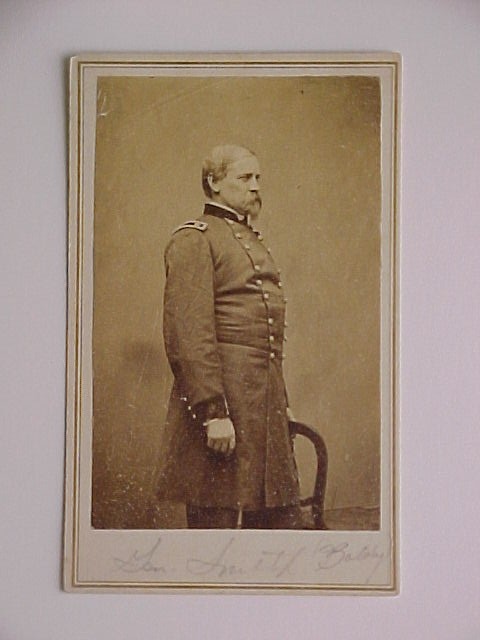 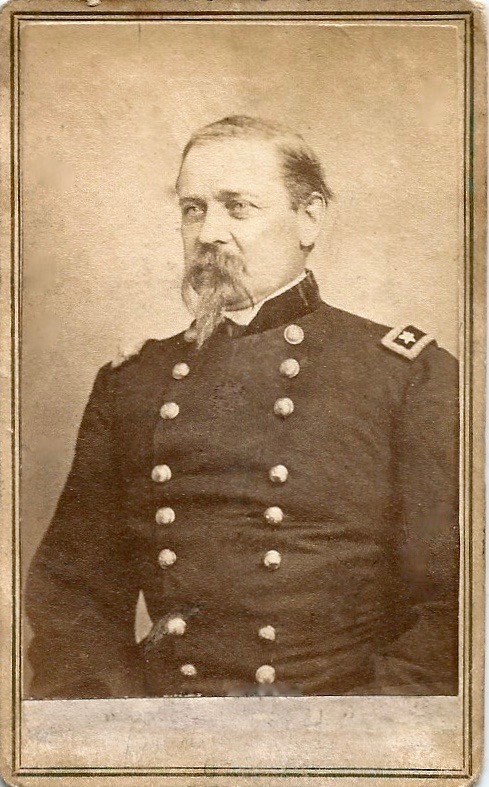 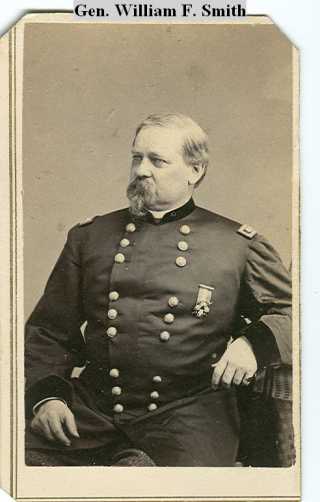 Born February 17, 1824, Saint Albans, Vermont, General Smith graduated with high honor from the United States Military Academy in 1845, and was appointed a lieutenant of topographical engineers. He received many brevets in the regular service for distinguished gallantry and meritorious services, the record of which may be found in the list of Vermonters serving in the regular army.

For several years after his graduation, he was engaged in military surveys of the Mexican boundary, and in locating a ship canal across the State of Florida. In September, 1855, he was appointed assistant professor of mathematics at the Military Academy, from which position he was relieved in June, 1865, on account of ill health, and assigned to duty in the Engineer Department of the Light House establishment. At the breaking out of the war he was on duty in Washington as Engineer Secretary of the Light House board. In the spring of 1861 he was ordered to New York, and employed for a short time in mustering volunteers. He was then ordered to Fortress Monroe, where he served under Gen. B. G. Butler.

Soon after the attack on Fort Sumter General Smith, then a captain, informed Governor Fairbanks of his willingness to accept the command of a regiment from his native State, and after repeated refusals, the consent of the War Department was at last obtained by the assistance of General Scott, who took a particular interest in the Vermont troops, and particularly requested that Captain Smith be detailed to command the Third Vermont, retaining at the same time his commission in the regular army. His commission, which was dated back to April 27, was received in the latter part of July, and he at once proceeded to Washington and took command of his regiment. He was soon appointed Brigadier-General, and persuaded General McClellan, with whom he was well acquainted, to have the Vermont troops brigaded together and the command given to him. By this arrangement the Second, Third, Fourth, Fifth and Sixth regiments were formed into a brigade, the first in the army composed exclusively of troops from a single State, which made for itself a reputation second to none in the whole history of the war. General Smith having been assigned to the command of a division, the brigade was given to Brigadier-General W. T. H. Brooks, another distinguished soldier of Vermont lineage, his father having been a native of Montpelier.

In the organization of the Army of the Potomac, in March, 1862, General Smith's Division, which included the "Vermont Brigade," became the Second Division, Fourth Corps, and was considered one of the best in the entire army. He commanded the division during the Peninsula, Antietam and Second Bull Run campaigns, and until the re-organization of the army under Burnside, when he was assigned to the command of the Sixth Corps, with which he participated in the battle of Fredericksburg. At the second re-organization, under General Hooker, he was relieved from duty with the Army of the Potomac, and ordered to his home.

At the opening of the Gettysburg campaign he volunteered for duty under General Couch, and served with the militia of Pennsylvania and New York; the troops under his command being engaged at Carlisle, Pa., and Hagerstown, Md. In September, 1863, he was ordered to the Army of the Cumberland, then at Chattanooga, and was assigned to duty as its chief engineer, in which capacity he planned and carried out the attack at Brown's Ferry, on the Tennessee River, by which the river and "short road" was gained, and the army saved from destruction. In April, 1864, General Smith was assigned to the Eighteenth Corps, and participated in the campaign on the south side of the James River. He was subsequently sent with his corps to reinforce the army of the Potomac, and participated in the engagements of June 1st and 3d, at Cold Harbor. Returning to the south side of the James, on the 15th of June they assaulted the lines before Petersburg, carrying the enemy's outer work and capturing sixteen guns and several hundred prisoners.

On the 3d of July General Smith was placed in command of the Army of the James. A few days later he obtained leave of absence on account of ill health, and on the 19th was relieved from duty in the field. He was subsequently sent to New Orleans by President Lincoln, to examine into the administration of affairs in the Department of the Gulf. On his return north he resigned his commission in the volunteers, and on March 21, 1867, tendered his resignation as Major of Engineers in the regular army, having been in active service for twenty-two years.

He had been ill all of the winter, having early in November caught a severe cold, which his seventy-nine years could not withstand. The body will be buried in Arlington Cemetery, Washington. No military pomp will attend the funeral.

Because of a premature scarcity of hair Gen. Smith, while a cadet at West Point, was nicknamed, "Baldy," which clung to him all through life, and served to distinguish him from the many other Smiths who did valiant service in the United States Army, particularly during the civil war.

When he was seventeen years old he received his appointment to the Military Academy. His previous education had been acquired in a village school at St. Albans, Vt., where he was born. When he was graduated from West Point he was placed in the Engineering Corps. He served through the Mexican War, and when the civil war began he organized and became Colonel of the Third Vermont Volunteers.

In 1863, Gen. Smith was ordered West and joined the Army of the Cumberland, then in command of Gen. Rosecrans. He was appointed Chief Engineer of the army. After the Battle of Chickamauga, when Thomas was bottled up at Chattanooga and the army was short of provisions, it was Gen. Smith who found a way of relief. The Confederate forces had all the roads and waterways strongly guarded. Gen. Smith suggested a strategic move, and under his personal command Brown's Ferry was seized and a part of the Confederate guard was driven back so that Hooker was enabled to come up and establish communication, saving Thomas' force.

Gen. Smith was always a favorite with his soldiers, and although he never joined the Grand Army of the Republic, he retained their affection as veterans. He wrote many military papers, criticisms of a technical nature. He was a member of the Sons of the Revolution.

Gen. Smith married Miss Sarah Ward Lyon, a daughter of Samuel Lyon, a New York lawyer, in 1860. They had five children, two of whom are now living, Miss Clara Farrar Smith and Stuart Farrar Smith. The latter is an assistant engineer in the United States Navy and is stationed at Elizabeth, N.J.

Philadelphia, March 2 - William Farrar Smith, better known as "Baldy" Smith, one of the prominent figures of the Civil War, died at his home in this city Saturday night. He was in his 80th year, and was born in St. Albans, Vt. He entered West Point at the age of 17 and when the Civil War broke out he was made commander of the Third Vermont regiment. He rose rapidly and became one of the leading figures in that struggle. Fifteen years ago he became engaged in the work of improving rivers and harbors in Delaware and Maryland. Gen. Smith's death reduces the number of living corps commanders of the Civil war to four.