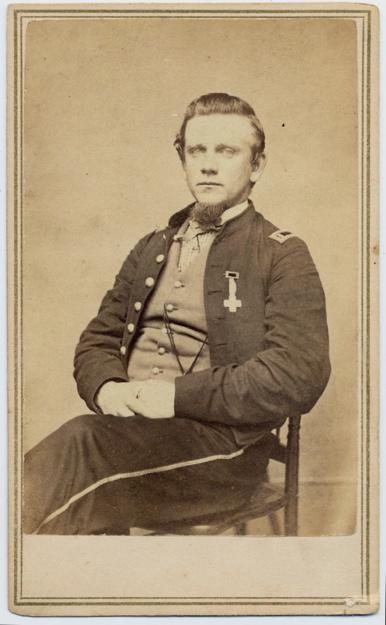 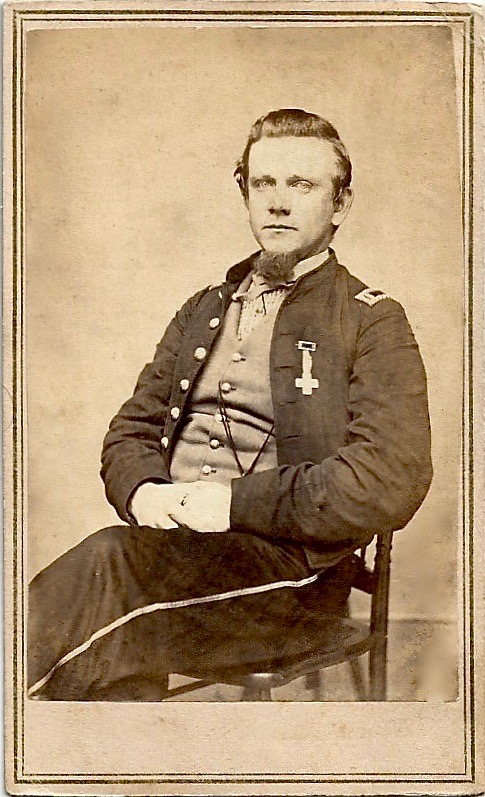 He received his education in the district schools of his native town and Cavendish, and in Springfield Seminary and Chester Academy. At the outset of his active life he was employed as station agent at Danby, and North Bennington.

Enlisting in Co. A, 4th Regt. Vt. Vols., Sept. 4, 1861, he was promoted to commissary sergeant, and after being confined in a rebel prison in Richmond for seven months he was mustered out of service, at the expiration of his three-years' enlistment, at Brattleboro. He again sought service in the same regiment, was promoted to 1st Lieut. and quartermaster, and appointed a member of the staff of Gen. George P. Foster, and Gen. Lewis A. Grant. He was acting quartermaster of the Vermont Brigade during the last part of its service, and when the command left the field for Vermont, he was again mustered out with his regiment at Burlington.

Soon after the close of the war he was employed as bookkeeper in the large hide and leather house of Lapham & Clarendon in New York City, but impaired eyesight caused by exposure in the army compelled him to give up his position. On Jan. 16, 1867, he again entered the service of the Bennington and Rutland Railway Co. as station agent at North Bennington. He was successively promoted to general freight agent and to general passenger agent, both of which offices he holds at the present time.

Mr. Spafford was married, Oct. 5, 1864, to Mattie E., daughter of William and Fanny (Spring) Kingsbury, of Chester. Mrs. Spafford died June 3, 1877, leaving four children. He was again married, Dec. 5, 1879, to Lydia Ella, daughter of Jared and Almira (Eaton) Marsh, of Chester, of which union there are five children.

Mr. Spafford lived in North Bennington from January, 1867, until April, 1882, when he removed to Rutland, where he now resides.

Henry W. Spafford, 70 years old, for many years a prominent resident of this city, died suddenly of heart failure Monday afternoon at his home in Seattle, Wash.

The body will be brought to this city and taken to Weathersfield, Mr. Spafford's birthplace, for burial.

Mr. Spafford, the son of William H. And Eliza Rumrill Spafford, was born at Weathersfield November 2, 1840. Receiving his education in the district schools of that place and Cavendish and at Springfield seminary and Chester academy, at the age of 17 he assumed the duties of station agent at Danby and North Bennington.

He enlisted in company A, 4th regiment of Vermont volunteers on September 4, 1861, and later was appointed commissary sergeant. Mr. Spafford was confined for seven months in a rebel prison at Richmond and later having completed his three years enlistment was mustered out of service at Brattleboro. Re-enlisting in the same regiment, he was promoted to first lieutenant and quartermaster, and appointed a member of the staff of Gen. George P. Foster, and Gen. Lewis A. Grant. During the last part of his service he was acting quartermaster of the Vermont brigade and when the command left the field for Vermont he was again mustered out at Brattleboro.

At the close of the war he became a bookkeeper in a large leather house in New York, but was compelled to vacate the position because of defective eyesight.

Mr. Spafford re-entered the service of the Bennington and Rutland Railway company in the capacity of station agent at North Bennington, in which place he lived until he came to Rutland in 1882. He was promoted to general freight agent and general passenger agent and occupied both of these offices until his retirement about 10 years ago.

Leaving Rutland in March, 1908, Mr. Spafford went to California where he resided for two years, and then moved to Seattle, Wash., where he remained until his death. He retained his membership in Roberts post, was a member of the local Congregational church, and was also a deacon at the time of his departure from Rutland.

On October 5, 1864, he was married to Miss Mattie E., daughter of William and Fanny Kingsbury of Chester. Upon the death of his first wife he married Lydia Ella, daughter of Jared and Elmira Marsh of Chester, on December 5, 1879.