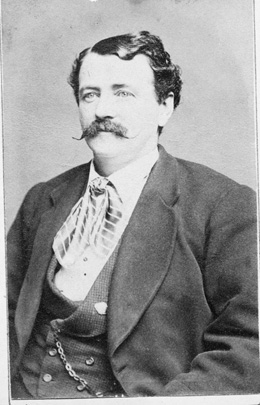 Charles Carroll Spalding, UVM Class of 1847, was the son of Dr. John Spalding of Montpelier. After leaving college he studied civil engineering, but did not follow the profession. When the California gold fever broke out in 1849, he was among the first to go to the Pacific coast. Having only indifferent success in mining, he returned East, spent a short time in Montpelier, and then going to New York, entered the service of Herndon & Co. as an express messenger between New York and Boston. He afterwards engaged in surveying and railroad engineering in Ohio, Illinois and Kentucky. At the time of the organization of Kansas as a territory he was living in one of the border counties of Missouri where he had married a Missouri lady. He took part, having removed to Kansas, in the organization of the Kansas territorial government; - wrote special letters to the New York Tribune encouraging emigration to Kansas, which attracted much attention at the East; for a time published a paper at Lawrence, of which city he was mayor. Soon after the Kansas difficulties commenced he left the State and for some time followed teaching. At the outbreak of the war he returned East and entered the army, serving two years in the 5th Vermont Regiment. On coming out of the army he started the Newport News at Newport in this State. Having sold out the News in 1866, he went to Boston and took a position upon the Boston Post. In 1869 he became connected with the Boston Herald, with which paper he remained until his death, which occurred 18 January 1877.

Mr. Charles C. Spaulding, for ten years connected with the reportorial staff of the Boston Herald, died on the 19th. He was born at Montpelier in 1826, and graduated from the University of Vermont in 1848. For three years he practiced his profession of civil engineer, and then spent three years in California. He aided in surveying several important railroads in the West, and soon after established a newspaper in Kansas. He was for a time mayor in Kansas City, and took an active part in the Kansas war, but was finally driven from the state. In 1861, he enlisted in the 5th Vt. Regiment and served two years. At the close of the war, he went to Boston and spent three years on the staff of the Post, after which he became connected with the Herald, where he has since been employed.