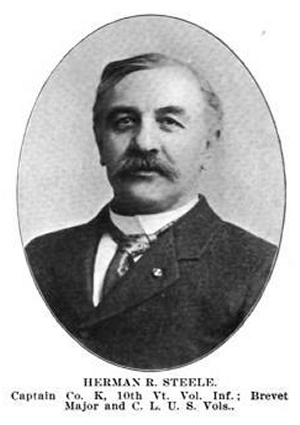 Judge Hiram R. Steele, 88, a widely known jurist, who since 1898 spent his Summers at his home in Park avenue, South Plainfield, died yesterday at his winter home, 33 Monroe place, Brooklyn, from informaties of age. Funeral services will be held there at 11 a.m. tomorrow with burial in Hillside Cemetery, this city, at 1 p.m.

Judge Steele was born in Stanstead, Quebec, where he spent his early life. He enlisted in the Civil War and served as a major in the 10th Vermont Regiment. He took part in many of the important engagements throughout the war.

Later he practiced law and was a judge in Louisiana and also served as Attorney-General of the State during the reconstruction period. Afterwards he removed to Booklyn, where he lived for many years. Just prior to 1898 he built an attractive home here which he occupied every Summer. In point of service he was the oldest director of the New York Life Insurance Company. He was a Mason and affiliated with other fraternal and civic organizations.