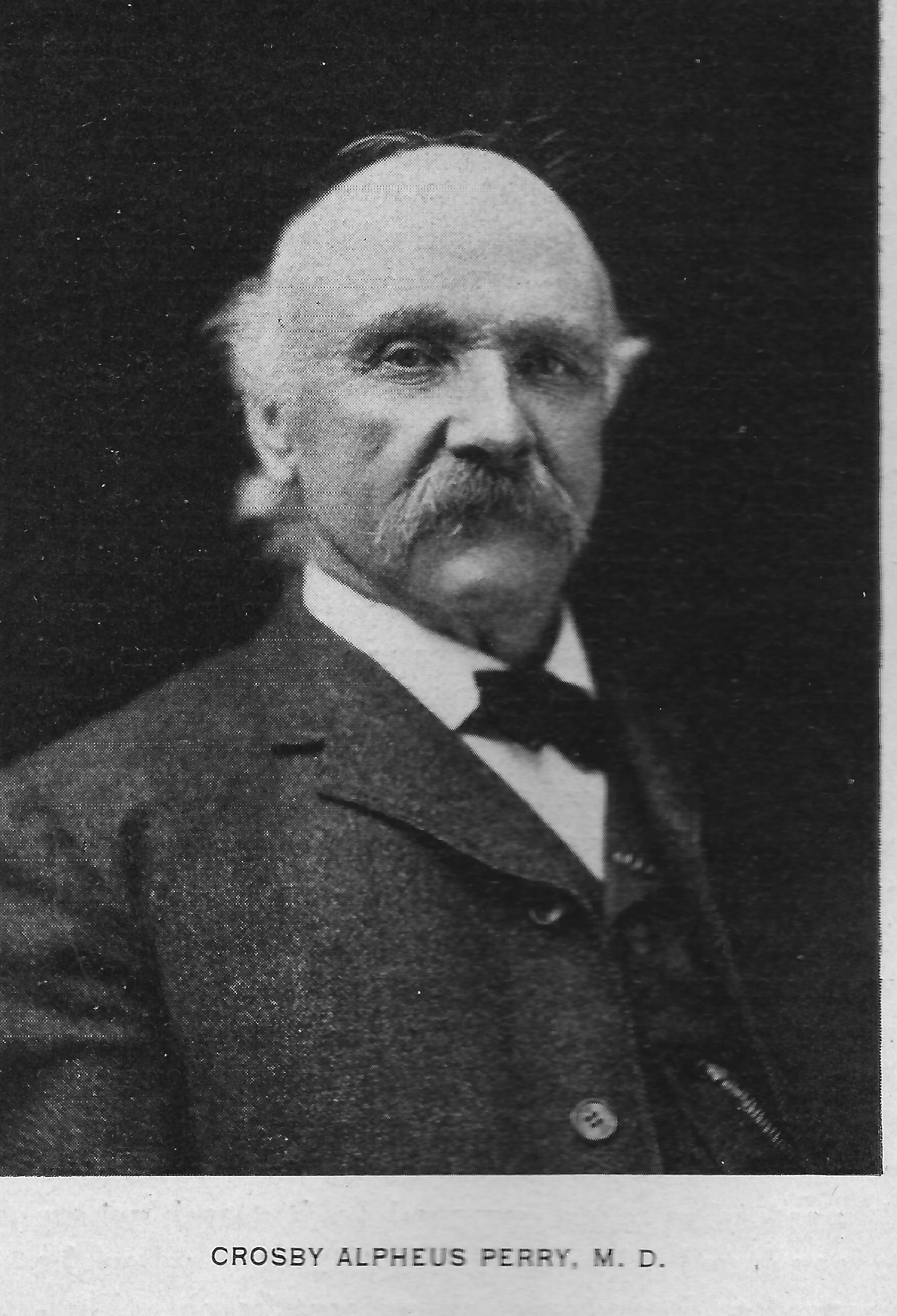 Dr. Crosby A. Perry, 87, of Pittsfield, Was Practicing
Physician in Readsboro, Vt., for 80 Years and Was
Former Bennington County Justice - Father Fought
In American Revolution and He Himself Was a
Civil War Veteran.

Dr. Crosby A. Perry, said to be the last real son of the American Revolution, and himself a Civil war veteran, former Vermont legislator, practicing physician for half a century and a former Bennington county justice, died yesterday at the home for aged people conducted by Mrs. Lydia Brundige, at 1078 South Church street, this city. He was in his 88th year. Since 1916 Dr. Perry had made his home with his Daughter, Miss Grace Perry in Pittsfield but when his failing health required almost constant care early last summer he was taken back to Readsboro where he had practiced his profession for over 30 years. He was brought here about a week ago in order that he might have greater comfort and care during the winter months but he passed away quietly yesterday of complications due to advancing age.

It is known that Dr. Perry was the youngest man whose father served in the American Revolution and it is believed that he was the last as well. He was a son of Micah Perry who was born at Lexington on December 3, 1759, and who, while living at Royalston, Worcester county, enlisted on June 12, 1778 at the age of 18 in Capt. James Berry's company, Col. Thomas Poor's regiment, serving for nine months until the end of the revolution as a private. Micah Perry was 78 years old when his youngest son, Dr. Perry who died yesterday, was born and in view of the fact that he was among the youngest soldiers to serve in the revolution and was of advanced age when his youngest child came into the world and that Dr. Perry was well beyond the four score years mark when he passed away yesterday, it is generally believed that no other son of the revolution survived him.

The Revolutionary war record of Micah Perry, now in the possession of Miss Grace Perry, confirms the story of his service while the pension bureau notes that:

"He was allowed pension on his application executed April 3, 1832, while a resident of Concord, Essex county, Vt., and he died there September 28, 1839. He married at Concord, Vt., on April 19, 1818, Susannah, daughter of Jonathan Woodbury, and she was allowed pension on her application executed February 14, 1853, while living at Concord, Vt., aged 53 years.

While the elder Perry was in his 80th year when he died, he showed no signs of advancing age and retained the vigor of middle life which would probably have kept him hale and hearty for many more years but for an accident that befell him. Nineteen months after his youngest child, Dr. Perry, was born, he was breaking a young colt when the animal became frightened at a boulder that rolled across the highway, bolted and threw his driver to the ground. Mr. Perry sustained a fractured skull and died the following day, leaving a widow 39 years old and eight children.

Dr. Perry's maternal grandfather, Jonathan Woodbury fought for three years in the revolution and was engaged in collecting supplies for the army in Vermont and New Hampshire during the War of 1812. Dr. Perry's brother, Chester Perry, was wounded in the city of Mexico during the Mexican war and died later in New Orleans.

Dr. Perry himself was born in the little village of Concord, Essex county, Vermont on March 1, 1838. He received such education as was obtainable in his native town and later was graduated from Norwich university at Northfield, Vt., and from Eclectic college of medicine and surgery in Philadelphia. He had just completed his studies for his degree in medicine when the Civil war clouds broke and in 1861 he enlisted in Co. E, 5th Massachusetts regiment from which he was later transferred to the hospital corps. He was in Sheridan's drive up the Shenandoah valley and later was a prisoner at Andersonville for three months until he made his escape and got back to the Union lines. Dr. Perry gave of his professional skill to both Union and Confederate soldiers and recalled vividly one incident in which he saved the life of an enemy soldier whose lower jaw had been shot away at Cedar Creek. Thirty years later he was in the registry of deeds at Memphis, Tenn., when he noticed a man with a screen over the lower part of his face. Recognizing the man's eyes, Dr. Perry approached him and learned that he was the same man whom he had saved from death.

Upon his return from the war, Dr. Perry settled in the little town of Wallingford, Vt., where he remained as a practicing physician for two years. Later he went to Rutland where he remained until, in the early 70's n epidemic of diphtheria broke out in Readsboro. The only resident physician of the town had fled and the disease was claiming victims almost hourly when Dr. Perry was prevailed upon to go to the rescue of the villagers and take up a lone fight against the contagion. He introduced the use of vaccine to the locality and waged so effective a battle against the epidemic that when it was finally stamped out through his efforts alone, he was urged to take up his residence in Readsboro. He remained there for 30 years, a fine representative of the old school of skillful country doctors whose whole lives were devoted to the well being of their fellow townspeople. During the Hoosac Tunnel days when the greatest engineering project of the times was being carried on just a few miles south of Readsboro, many of the men who were injured in the work were cared for by him while little villages scattered in the mountains about Readsboro depended entirely upon him, for years, for medical aid.

While living in Readsboro, Dr. Perry served for two years, from 1896 to 1898, in the Vermont legislature while for six years from 1910 to 1916 he was an assistant justice of the Bennington county courts. The town of Readsboro had honored him with many public offices includeing those of selectman, justice of the peace, health officer to which he was repeatedly elected, lister, and school director. For 40 years he had been a member of the Odd Fellows fraternity, and was grand master of the Vermont state lodge for two years.

Always a staunch republican, Dr. Perry cast his first ballot in 1860 for Abraham Lincoln whom he later met and talked with often in Washington and he had voted for every republican candidate for president since.

Dr. Perry had been twice married. By his first wife, who was Miss Ida Cutler of Whitingham, Vt., he had four children of whom three survive. He later married Miss Daisy Dunn of Monroe Bridge who died a few years subsequently.

In his last years, Dr. Perry's hearing failed slightly but his eyesight remained unimpaired and his voice was clear and resonant to the end. His mind had failed steadily during the past few weeks and a remarkable memory that had brought back scenes of his earliest youth more than 80 years ago, was gradually lost.

Dependable and faithful, thoughtful always for the welfare of his patients rather than of himself, Dr. Perry was typical of the country doctor who, for years have ministered to the ill and ailments of little villagers the world over. He had a pleasing personality, sympathetic and kindly, and with his warm sense of humor, his grace and refinement, he found a ready welcome everywhere that he went whether his calls were professional or social.

Dr. Perry is survived by one daughter, Miss Grace Perry of Pittsfield and two sons, Edward A. Perry of Springfield and Carl S. Perry of Clarksburg and seven grandchildren. The body will be taken to Readsboro where the funeral will be held tomorrow afternoon at 2 o'clock in the Baptist church. Rev Charles Ellis will officiate and burial will be in the family lot in the Sherman cemetery near Readsboro.

Berkshire County chapter, Sons of the American Revolution, of which Dr. Perry was an honorary member, will be represented at his funeral.