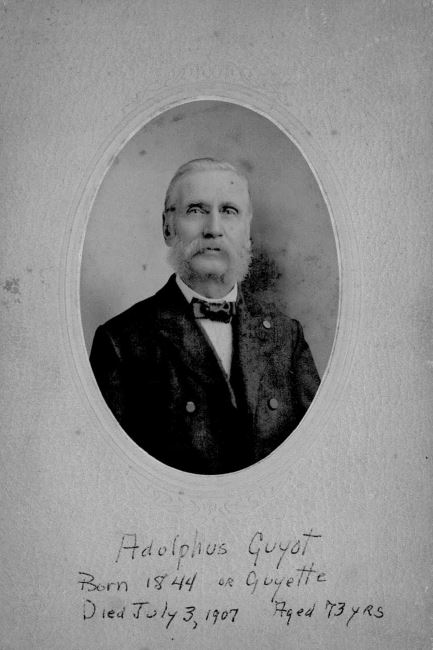 Adolphus Guyette died this morning at 6:30 o'clock at his home on the corner of Farrar and Messenger sts. He was 73 years old and was born in the y ear 1834 in Franklin. The funeral will be held at St. Mary's church Friday morning at 9 o'clock and the burial will be in the Fairfax street cemetery. Mr. Guyette was a member of A. R. Hurlbut Post, No. 50, G. A. R. He was a member of Company A, 118th Inf., N. Y. Vols. He is survived by his wife; seven sons, Alfred A. Guyette of Glens Falls, N. Y., Charles Z. Guyette, of Sandy Hill, N. Y., Mitchell Guyette, of Jersey City, N. J., Joseph A. Guyette, of Staples, Minn., George Guyette, of Montreal, Archie A. Guyette, of Plattsburgh, N. Y., and Raymond Guyette, of this city; and one daughter, Mrs. John Guyette, of Florence, Mass. Owing to the distance from this city joseph A. Guyette will not be able to attend the funeral. Mr. Guyette had been a resident of this city for forty years

The Messenger is requested to say that members of A. R. Hurlbut Post, No. 50, G. A. R., are requested to meet at Memorial hall Friday morning at 8 o'clock to attend the funeral of Adolphus Guyette.