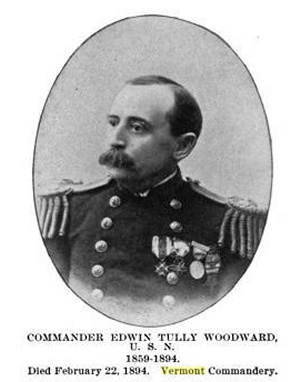 Edwin T. Woodward was born March 8, 1843, in Castleton, Vt., the son of Edwin C. and Charlotte (Barney) Woodward. He received an appointment to the Naval Academy and began his studies there on November 21, 1859. One of several whose academy careers were foreshortened by the war, he served on the sloop Mississippi, the garrison ship Island and the gunboat Sciota in the Mississippi Flotilla and the Gulf Blockading Squadrons, including two attacks on and passage of the Confederate batteries at Vicksburg in 1861 and 1862.

In late December 1861, Woodward was part of the prize-crew of the captured Confederate steamer Henry Lewis, off Ship Island, Miss., when he commanded one of two small boat that went ashore and captured a Confederate battery, "which was done as expeditiously as possible and without molestation."

While on Sciota off New Orleans, in April 1862, he was commended by Fleet Captain Henry H. Bell, for "gallantly working the rifle on the topgallant forecastle."

He then served on the sloop Cyane, in the Pacific Squadron in 1863, and participated in the capture of the Rebel Privateer J. L. Chapman, on March 15, in San Francisco harbor. Woodward apparently spent little time at sea during this tour, as Cyane was import San Francisco from February 15 to September 28.

Promoted to Lieutenant in February 1864, he was assigned to the steam frigate Minnesota, North Atlantic Blockading Squadron. In the assault on Fort Fisher on January 14, 1865, Lieutenant Woodward commanded a company of 49 men from the Minnesota, and "behaved bravely," and his conduct was represented as having been "highly commendable" by Commodore Joseph Lanman, commanding Second Division, North Atlantic Blockading Squadron. He also "greatly assisted" Lieutenant Commander William B. Cushing, commanding Monticello, with that vessel's boat crews.

After the war, Woodward served on the screw sloop Kearsarge. Kearsarge had been decommissioned in November 1864 after her famous battle with the Confederate raider Alabama off the coast of France the previous June. She recommissioned April 1, 1865 and sailed on the 14th for the coast of Spain in an attempt to intercept the Confederate raider Stonewall; but the vessel eluded Federal ships and surrendered to Spanish authorities at Havana, Cuba, May 19. After cruising the Mediterranean and the English Channel south to Monrovia, Liberia, Kearsarge decommissioned August 14, 1866 in the Boston Navy Yard.

Woodward married, on August 9, 1866, Mary Elizabeth Hawley, daughter of Rev. Bostwick and Elizabeth (Webber) Hawley. According to the 1910 census, Mary had four children, none of whom were still living at that time, but the 1880 census, when Edwin and Mary were enumerated with her father in Saratoga Springs, NY, did not list any children. Woodward was also promoted to Lieutenant Commander in 1866.

In 1867 and 1868, Woodward served on the screw sloop Guerriere, recommissioned on May 21, 1867, which sailed from New York June 28, 1867 to serve as flagship of the South Atlantic Station protecting American commerce and interests along the coast of South America."

In 1869, Woodward served onboard the newly built gunboat Quinnebaug and the Civil War-era gunboat Kansas, along the Atlantic coast of South America and the western coast of Africa, probably returning to Washington on September 15, 1869, when the Kansas was decommissioned.

He was assigned to the Brooklyn Navy Yard from 1869 to 1871, reassigned to the Philadelphia Navy Yard, and probably commanded pre-commissioning crews for the Civil War-era single-turreted monitors Canonicus and Saugus. Canonicus was recommissioned January 22, 1872, and cruised in coastal waters in the Atlantic Ocean and Gulf of Mexico. Saugus was recommissioned November 9, 1872, sailed south, and was based at Key West until 1876.

In 1874 and 1875, Woodward served on the Civil War-era screw sloop Brooklyn. She was reactivated January 20, 1874, and operated "along the southern coast of the United States until autumn when she entered the Norfolk Navy Yard to be fitted out for service as flagship of the South Atlantic Station. She got underway for the coast of Brazil on January 23, 1875 and operated in South American waters protecting American interests until heading home on December 7. Following service in the Home Squadron, she was decommissioned at New York on July 21, 1876 and laid up."

In 1876, Woodward served on the screw sloop Vandalia. Newly commissioned on January 10, 1876, Vandalia "was soon deployed with the European Squadron and spent most of the next three years cruising in the Mediterranean Sea along the coasts of Africa, the Middle East, and Turkey."

Woodward was ordered to torpedo duty in 1877, was promoted to commander in February 1878. He was stationed at the Philadelphia Navy Yard from 1879 to 1880. He was probably on leave in 1880, when he was listed in the New York Census, living with his wife and father-in-law, Bostwick Hawley, in Saratoga Springs, NY.

After his tour at Philadelphia, Woodward was ordered to his first command, the gunboat Yantic, a Civil War vintage wooden-hulled vessel. Under his command "Yantic's crew took part in celebrations attending the unveiling of the statue of Admiral David G. Farragut in Washington, D.C., on April 25, 1881, before sailing later that spring to Mexican waters. In June, at Progreso, Yucatįn, she investigated the detention of the American bark Acacia before returning northward to familiar waters off the eastern seaboard of the United States." Woodward received the thanks of the State Department, probably in relation to the Acacia incident. In October 1881, Yantic also took part in observances commemorating the centennial of the Battle of Groton Heights and in festivities celebrating the centennial of the American victory at Yorktown, Virginia]."

In 1884, Woodward commanded a squadron consisting of the coastal monitors Passaic, Nantucket and the experimental torpedo boat Alarm to provide training to the crews of these vessels. As a result, he received the following letter:

Sir, -- The Department has received your final report of the 4th inst., in relation to the cruise of the monitors 'Passaic,' 'Nantucket,' and ram 'Alarm,' under your command, together with the reports of the commanding officers of the two last-mentioned vessels. The Department desires to commend you for the manner in which you have carried out the spirit of the instructions to make the cruise one of practical instruction to both officers and men, and to state that you have commanded the squadron to its satisfaction.

Acting Secretary of the Navy.

Woodward commanded the screw sloop Swatara between 1885 and 1886. The highlight of Swatara's activities during his command was the transport of a cargo of gold bullion from New Orleans, La., to Washington, D.C. in September 1885. "In early 1886, she was assigned hydrographic duties fixing locations on the Puerto Rican coast. After subsequently cruising as far north as Halifax, Nova Scotia, Swatara arrived at the Portsmouth Navy Yard, where she was decommissioned on October 27, 1886," and Woodward detached.

In 1888, Woodward was in temporary command of the monitor Terror, under construction at the New York Navy Yard.

Woodward spent his last two years at sea in command of the screw steamer Adams. Originally commissioned in 1876, Adams had spent several years in the Pacific before returning to Mare Island Navy Yard for a brief period of repairs in early 1889. On April 22, 1889, Commander Woodward in command, "Adams took on stores and supplies before departing San Francisco on June 18." She arrived at Honolulu on July 4.

The duration of her stay in Hawaii resulted from the maturation of a plot to dethrone King Kalakaua and dissolve the reform government installed by American business and missionary interests as a result of the 'Bloodless Revolution of 1887' that had been carried out in the course of Adams' previous extended sojourn in the islands. During the night of 29 and 30 July, insurgents occupied the palace grounds and a local militia unit, styled the Honolulu Rifles, took up positions in support of the government. By the evening of the 30th, the Honolulu Rifles had subdued the insurrection.

At that point, Woodward sent a landing party from the ship that established itself in the vicinity of the American legation. But the Hawaiian government restored order quickly without the necessity of American intervention, and the landing party returned to ship the following morning.

On August 4, 1889, Adams departed Honolulu and sailed a course south to Samoa, arriving at Apia harbor, Samoa on August 20. For the next nine months, she remained in those islands serving as American station ship there, making periodic visits to various islands. On 2 May 1890, Adams set sail from Pago Pago bound via Hawaii for the West Coast of the United States. She entered San Francisco Bay on 24 June and moored at the Mare Island Navy Yard on the 25th. There she was placed out of commission on 31 July 1890.

In 1892 he was assigned as Lighthouse Inspector in the 10th Light House District, which comprised 114 miles of the St. Lawrence River as well as Lake Ontario, Lake Erie and the Niagara River. Of note, he relieved Commander Charles Vernon Gridley, who would later command Olympia, Commodore George Dewey's flagship, during the attack on Manila at the beginning of the Spanish-American War. During his tenure, Woodward, on behalf of the United States Government, presented a life-saving medal second class to Miss Maebelle L. Mason, at the 'Cadillac Hotel,' Detroit, during the National Convention of the GAR. Mason had rowed more than a mile in a small flat-bottomed punt, from the Mamajuda lighthouse on the Detroit River, where she lived with her father, and rescued a man who had capsized in his rowboat.

He was a member of the Vermont Commandery of MOLLUS.