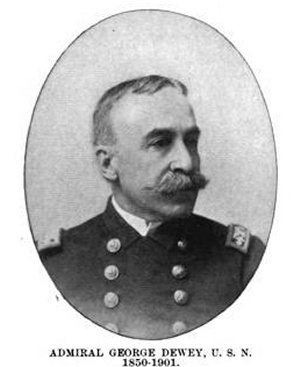 George Dewey was born in Montpelier, Vermont on December 26, 1837, the son of a prominent local physician. A mischievous, high-spirited boy, Dewey received an appointment to the Naval Academy in 1854, graduating in 1858.

After serving in the peacetime navy, Dewey was assigned to the steam frigate Mississippi, joining her in Boston on May 10, 1861, from which it sailed for blockade duty in the Gulf of Mexico. For several weeks the Mississippi remained at Key West before taking up station at Mobile Bay and later in the Mississippi River, where it participated in the assault on Forts Jackson and Philip during the Battle of New Orleans on April 24-25, 1862.

After again serving in the peacetime navy, Commodore Dewey was ready for his rendezvous with destiny. On October 21, 1897, Dewey was ordered to proceed to Japan to serve as commander-in-chief of the Asiatic Squadron. On January 1, 1898 he boarded his flag ship, the cruiser Olympia. After the destruction of the U.S.S. Maine in Havana Harbor, Dewey, on orders from acting Secretary of the Navy, Theodore Roosevelt, assembled the Asiatic Squadron in Hong Kong and prepared for operations against the Philippines. On April 24, 1898, word was received that the U.S. and Spain were at war. The Squadron was ordered out of Hong Kong and sailed to Manila Bay where it engaged the Spanish Fleet on May 1. Although the Spanish fleet was poorly prepared, the guns on Corregidor and the mines in the harbor made the Spanish a formidable opponent. In seven hours of fighting the nine ships of Dewey's fleet destroyed the eleven ships of the Spanish fleet. Thereafter the squadron accepted the surrender of the Spanish garrisons on the islands in the bay and blockaded the harbor until the arrival of the Army which captured Manila and began the suppression of the Insurrection.

After the war, Admiral of the Navy Dewey returned to a hero's reception. Initially it appeared that he would be the leading candidate for President in 1900, but his promise to "execute the laws of Congress as faithfully as I have always executed the orders of my superiors" brought his political career to an early conclusion.

Note: As part of the observance of the Centennial of the Spanish American War in 1998, Mr. Gallen felt it fitting and proper to direct our attention to those Civil War Veterans who again answered the call and served their country in its first overseas war, and has graciously given us permission to republish it here.

It is with feeling of genuine grief that the Secretary of the Navy announces the death at 5.56 p.m. yesterday at his residence in Washington of The Admiral of the Navy.

The career of George Dewey "ran in full current to the end." Vermont was his mother State and there was always in his character something of the granite of his native hills. Dewey was under fire with Farragut in the Mississippi River, and bore himself gallantly throughout the War between the States.

The battle in Manila Bay on 1 May 1898, made him the foremost naval officer since Farragut and victor of the first American sea fight with a foreign foe since the War of 1812.

"Gentlemen, a higher power than we has won this battle to-day," the commodore said to his captains at the conclusion of the battle when it had been learned that the victory, one of the most decisive in our history, had been one without the loss of a single American seaman. In peace, in war; in sickness, in health; in victory and in conflict, and in every relation of life Admiral Dewey invariably exhibited the virtues of the patriot and the Christian.

His whole life, 62 years of which, were spent in the Navy, was full honorable achievement, and his service in peace has been hardly less distinguished than his laurels in war. As president of the General Board of the Navy since its inception he has played a leading part in making the Nation ready for war on the seas. The same statesmanlike qualities which he exhibited in handling the international situation at Manila after the battle of 1 May 1898, he has shown as the head of this board of naval experts.

In recognition of his victory in Manila Bay the then commodore was advanced one grade to that of rear admiral, and in addition received the thanks of Congress. Later by special act of Congress he was promoted to be The Admiral of the Navy, a rank never held by an American naval officer previously, although two, Porter and Farragut, were rewarded with the rank of full Admiral. He was placed by Congress on the active list until such time as he might see fit to apply for retirement. But his active spirit could not rest. He never folded his hands. He chose to die on the bridge, even until the Pilot came aboard his life craft who should take him across the bar. He died one of the foremost figures of modern times.

The flag will be displayed at half-mast at all navy yards and stations, and on board all ships in commission until after the funeral shall have taken place, and 19 minute guns will fire at noon on the day of the funeral from each navy yard and from the senior ship present afloat.

All officers of the Navy and Marine Corps will wear the badge of mourning with the uniform for 30 days.

The Navy Department, by executive order will be closed on Saturday, 20 January 1917.

The following executive order and message of the President to the Senate and House of Representatives are quoted for the information of the naval service.