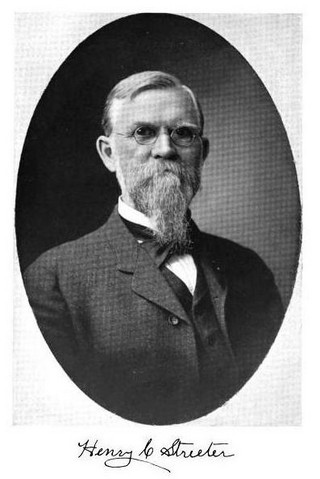 Henry C. Streeter acquired his education in the Chesterfield public school, and after completing his studies he was engaged as a clerk in a shoe store until the breaking out of the Civil war. He enlisted at Brattleboro, Vermont, October 2, 1861, for three years; re-enlisted at Stevensburg, Virginia, December 31, 1863, for three years; was promoted successively to corporal, fifth sergeant, orderly sergeant; commissioned second lieutenant, first lieutenant and brevet captain; discharged at Burlington, Vermont, August 25, 1865. On the 26th of August, 1864, he was dangerously wounded at Charleston, Virginia, by a bullet that passed through his left arm and one through the body. After three months in hospital, he recovered sufficiently to return to his company for duty; though he narrowly escaped death, his courage was good to fight the Johnnies again. He had three horses shot from under him, but horses were cheaper than men. After enlisting at Brattleboro and remaining there for two weeks they then were ordered to Burlington, Vermont, also men that had enlisted in other parts of state for the cavalry regiment reported there and were organized into ten companies of one hundred in each company, Company F being the Brattleboro company. He was mustered into the United States service by Lieutenant J. W. Jones, of the United States Army, November 19, 1861. December 14, 1861, the regiment broke camp under orders to report to Washington, D. C., and it started by rail. The men were loaded into the cars with the horses, eight of each, and one hundred and fifty-three cars were loaded. After remaining in Washington a few days, they were then ordered to Annapolis, Maryland, where they now came down to camp discipline under Brigadier General Hatch's orders, as he was put in command of the brigade composed of the First Vermont, First Michigan, Fifth New York regiments, and he also insisted upon company officers attending to stable duty, though the buckwheat cakes grew cold. Squadrons were now organized from the different companies of the regiment, F and C being put together as the fourth squadron. Company drills were now an every day occurrence. The regiment left Annapolis March 8, 1862, for Shenandoah Valley, via Harper's Ferry, and singing as they went through, "John Brown is here no more." Active operations were now in progress in the valley. General Stonewall Jackson was in the upper valley making ready to attack General Banks, and the regiment was divided up into squadrons and companies at different points in the valley, doing picket duty until the night before Banks' retreat. The companies were then ordered together on Fisher's Hill, and the next day fighting commenced and the Union forces were driven out of the valley. The cavalry had some hard fighting on that retreat out of the valley, as General Banks' forces were light in number compared with General Jackson's. As the regiment was filing past an Indiana regiment, they called out, "Let the Green Mountain boys go at the Johnnies; they are old sons of old Ethan Allen, and will show the Michigan boys something new." The chaplain of Mr. Streeter's regiment evidently had some of the spirit of Peter Muhlenburg, the old Revolutionary minister of Woodstock, Virginia, who after preaching to his Hock, called them out into the churchyard and said: "There is a time to pray and a time to preach, and a time to fight, and the time to fight has now come," and then led them on to the fight. The fighting went on with Mr. Streeter's regiment, companies and squadrons sometimes together, other times separate, until the surrender of the Confederate army at Appomattox Court House by. General Robert E. Lee to General U. S. Grant, April 9, 1865, and Company F took an active part in the many battles and skirmishes the regiment were in, and the same may well be said of other companies of the regiment.

Company F here has a record that is an honor 'to every member of the company, a notable record from beginning to the finish. The cavalry was the most important arm of the war of the Rebellion. The Third Cavalry division in the last six months of the war, captured from the enemy in open battle one hundred and eleven pieces of field artillery, sixty-five battle flags and upwards of ten thousand prisoners of war, including seven general officers. The First Vermont Cavalry was in this division, and Vermont may well be proud of the record that it has caused to be recorded in the history of the war of the Rebellion, and also in the state report of her troops. Captain Streeter was on detached duty during the winter of 1862 and 1863, at Washington, D. C., on the general court martial, and his duty often took him to the front when the armies were quartered at Fairfax Court House, twenty-five miles from Washington, and he made the trip many times alone, going out and back in the night. There was only one picket post half way out, and that was the winter that the guerilla Mosby was picking off our picket posts and also captured General Stoughton there at Fairfax. Captain Streeter was at Fairfax Court House the night before Stoughton was taken, at Colonel Johnson's quarters, and he said to Captain Streeter, Mosby will be gobbling you up one of these nights." It was one o'clock at night when the Captain left for Washington, and the Colonel said it was not safe to be coming out there and back, and said to tell the judge advocate to change his order of tactics out on this line and the order was obeyed and Captain Streeter did not go out there any more in the night time. He often thought of Mosby in passing that way, but he had a fleet horse and his only fear was of being surrounded.

After the termination of the war Captain Streeter engaged in the hotel, business, and for several years conducted successfully the Bellows Falls House: later he removed to Rutland. Vermont, where he acted in the capacity of superintendent of a peat factory; in 1882 he located in Brattleboro. where he was employed with the Estey Organ Company, in the fitting-up stock department, lie retained this position until his eyesight failed him and he was compelled to resign ; for the following two years he was placed in charge of the livery business at Fisher's Island and after the expiration of this period of time he retired from the active duties of business life, having accumulated a comfortable competence. Captain Streeter is a prominent member of Sedgewick Post No. 8, G.A.R., and has held all the chairs and acted as commander of his post. In his political affiliations he is a firm adherent of the principles of the Republican party, and he was honored by his townsmen by being elected a member of the board of trustees of the village of Brattleboro, which position he held for three years; he also acted as chairman of the board for two years. He is a consistent member and supporter of the tenets of the Universalist church.

Captain Streeter was united in marriage to Miss Nellie Clegg, of Bellows Falls, and their children are: Franklin C. Streeter, who married Velma Bailey and has one child, Eleanor; Mr. F. C. Streeter is employed with the Estey Organ Company. Henry Archer Streeter, a commercial salesman of Waterbury, Connecticut, is the second son. Charles Bertram Streeter possesses extraordinary mechanical and artistic talent, being able to execute some of the finest work in parquetry and in-laid work; since learning his trade he has spent some time in Europe in order to perfect himself in all its branches, and is employed in Niles, Ohio, as expert finisher of railroad coaches. Zilla, the only daughter, married Rollin H. Brown, of Brattleboro.

Capt. Henry C. Streeter , 77, a retired business man and veteran of the Civil War, died at his home, 29 Western avenue, at 3 o'clock yesterday morning after a short illness with heart trouble and other ailments incident to advancing years. Capt. Streeter was born in Chesterfield, N.H., January 27, 1841. He acquired his education in the Chesterfield public schools and after completing his studies he was engaged as a clerk in a shoe store until the breaking out of the civil war. He married Miss Ellen G. Clegg of Bellows Falls in Nashua, N.H. in 1866.Four children were born to them, three of whom are living; Henry A., died September 9, 1915. The three living are Frank C. and Zilla M. Brown, wife of Rollin H. Brown of Brattleboro, and Charles B. Streeter of Cleveland, O. One grandchild, Eleanor, wife of Alcide Marion, and one great-grandchild, Exilda Marion, also survive. Capt. Streeter was a member of the Universalist church and an active member of Protective grange and past master of Windham county Pomona grange, and was past commander of the state Grand Army. He was also at the time of his death a director of the old soldiers' home in Bennington. He was a firm adherent to the principles of the republican party and was honored by his townsmen by being elected a member of the board of bailiffs for the village of Brattleboro, which position he held for three consecutive years, acting as chairman of the board for two years.

Capt. Streeter joined Sedgwick post No. 8 of Brattleboro December 5, 1883 and held various offices including junior and senior commander of the post.

Capt. Streeter was present at the surrender of Gen. Lee's army to Gen. Grant and took part in the grand review at Washington, May 24, 1865, at the close of the war. Up to the time of his death Capt. Streeter always took a prominent role in all Grand Army activities, both locally and in the state. Mrs. Streeter died November 19, 1912. The funeral will be held at his late residence tomorrow afternoon at 2:30 o'clock.