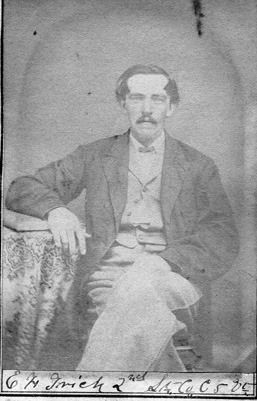 ALDERMAN TRICK DIES SUDDENLY
A Brave and Enthusiastic Soldier and a Prominent Citizen.

Alderman Elwin H. Trick died very suddenly yesterday morning of uremia after an illness of only two days, about 12 hours of which he was unconscious. Early yesterday morning he suffered four severe convulsions and in an hour or so afterward he breathed his last.

Mr. Trick was a veteran, enlisting as a private in Co. I, 5th Vt. Vols., Sept. 9, 1861, at 21 years of age, serving something over two years and on Dec. 25, 1865 he re-enlisted and was mustered out of service as commissary sergeant June 29, 1865. He was thrice promoted, first serving as regimental commissary sergeant, receiving the appointment on July 31, 1864, and on June 4, 1865, he was commissioned second lieutenant of Co. C, 5th Vt. Vols. Mr. Trick was an influential citizen and in 1889 he was elected an alderman from the Second wards on the republican ticket. In 1890 he was chosen president of the Board of Alderman, and in 1891 he was re-elected alderman for another term by a good majority. While one of the city fathers, Mr. Trick has been a faithful public servant, being a member of the committee on streets, accounts and claims and chairman on public building and parks. Perhaps as good and true a tribute as can be paid to Comrade Trick would be in quoting what a prominent business man, who had dealings with him for many years, said after hearing of the sad end, "He was as honest and upright a man as ever walked." No one had anything against Comrade Trick, and it was always a pleasure to meet him. He had been a member of Stannard post almost from its organization, had been commander of the post and had held many important offices in the department. He was an enthusiastic comrade and his campfire talks were always in demand by G. A. R. Posts in the state. A more extended account of Mr. Trick's career as a soldier and citizen will appear later.