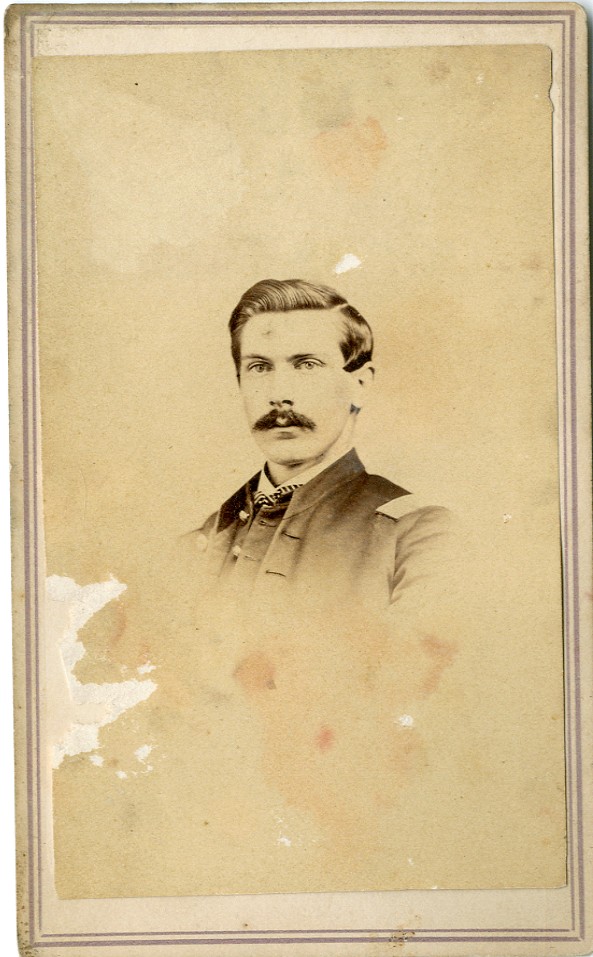 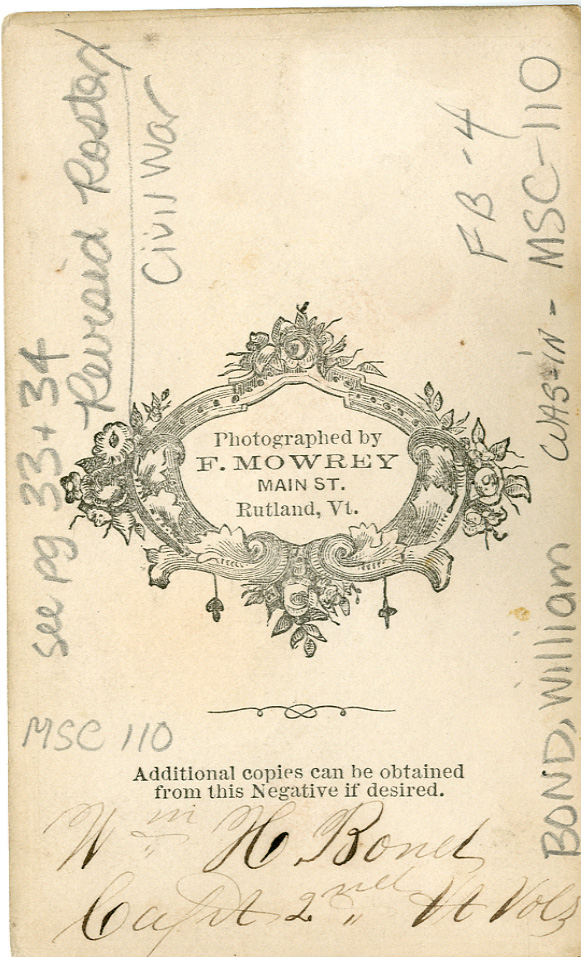 Career of Captain William H. Bond, Both at Home and on the Field of Battle, a Most Creditable One.--Resided in Danby for 46 Years, Excepting Four Years Spent in Army.

The picture which occupies the position of prominence on our first page this week is that of another well-known and long-time resident of Danby-- Captain William H. Bond.

Mr. Bond was born in 1840 at Thetford, Orange County, Vermont, his parents being Henry and Betsey Chamberlin Bond. His father was a farmer, but William evidently did not fancy farming at that time, for he left home when he was ten years of age to take up his residence with an uncle at Watervliet Center, NY, with whom he remained about two years and then took a situation in a store in Albany, NY. After remaining in the latter position till sixteen years old, through the efforts of his brother, Edson Bond, he came to Danby and was a time employed as assistant to the latter at the railroad station in this village.

Leaving the depot, Mr. Bond entered the employ of Wheeler & Walker of North Dorset, where he was employed in their large steam lumber mill till May 7, 1861, when he enlisted from Danby in Company A, Second Vermont Volunteers, which was the first volunteer regiment raised in Vermont, and was mustered into service June 20, 1861, joining the Army of the Potomac. The regiment was in what was distinctively known as The Vermont Brigade, and commenced its first active campaign at Yorktown, Va., April 6, 1862.

Mr. Bond entered the service as private, and after serving the first period of enlistment, again re-enlisted on the field December 21, 1863, was soon after promoted to sergeant and held that position till Sept. 15, 1864, when he was promoted to first lieutenant of his company. He served with honor in this capacity until December 24, 1864, when he was promoted to the captaincy of the company, holding that official rank till mustered out of the service on July 15, 1865. The "History of Danby," published in 1869, says of the subject of this sketch: "He was a brave soldier and a good officer, and his rapid promotions were the result of meritorious conduct." He was one of the four from this town to enlist in the regiment, one being killed in battle, one other mustered out of service before the term of enlistment had expired, and the fourth one re-enlisting and serving till the mustered out of the regiment, as did Mr. Bond.

Mr. Bond participated in all the engagement in which the Army of the Potomac took part, commencing with the first battle of Bull Run and ending with Lee's surrender at Appomattox Court House in the spring of 1865. No regiment of this division of the Federal Army experienced more hardships or suffered greater losses, the loss in the battle of the Wilderness being nearly one-half its entire force in killed, wounded or missing. From the crossing of the Rapidan, May 4, 1864, to the 21st of the same month, a period of seventeen days, the regiment lost, in killed, wounded and missing, 454 men; and from September 30, 1863 to August 31, 1864, the number of men on duty in regiment was reduced from 730 to 302. The regiment was almost invariably placed in the front, was seldom held in reserve, and was engaged in all the hard-fought battles of the Army of the Potomac.

Returning to Danby from the war in 1865, Captain Bond engaged in business with Mr. J. B. Nichols, where he learned the tin business, in which he succeeded Mr. Nichols sometime later. For a year or two, he conducted the business on quite a large scale, running several peddler's carts through the adjoining territory, picking up barter of all kinds in exchange for goods in the tin, glass and hardware lines. Mr. Bond's place of business was then in the old Union Stone building, which stood on the corner opposite the MIRROR office, where Mr. Herd's photograph tent is now stationed. In 1867 this building and most all of its contents were destroyed by fire. In it was stored an immense quantity of barter, which, being mostly rags and inflammable stock, was entirely consumed; and as this represented the receipts for the goods disposed of by Mr. Bond's peddlers, it was like the burning up of so much ready cash, and his savings and investments were practically wiped out in the twinkling of an eye, as it were.

Undaunted, Mr. Bond resumed business in the basement of the hotel and continued there till he built the Enterprise Hall building in the early seventies, we believe and has since conducted the tine and hardware business in the southern portion of the ground floor of that building. In 1869 Mr. Bond purchased the Danby Hotel property, and not long afterward tore down the old barn and erected the present commodious one. He then erected the Enterprise Hall building on the site of the old bar--and the editor of the MIRROR well remembers he night the hall was dedicated to dancing purposes, between four and five hundred merry dancers from all directions being in attendance. The old hotel hall was small, but Mr. Bond's dancing events which had been held there had become so popular that every time they occurred the hall was packed to suffocation, and the new hall had become a much-needed institution long before it was built.

After erecting the hall building, Mr. bond changed the old hall into sleeping apartments and has since practically rebuilt the entire hotel, which he has conducted for the past thirty-three years. Since Mr. F. E. Bond abandoned the mercantile business a year or so ago, which he had for several years conducted in the north store of the Enterprise Hall building, Captain Bond has taken up this line of trade and now conducts a general store there, carrying a very complete stock of merchandise suited to the trade of the community. Mr. Bond has also for many years dealt extensively in mowing machines, horse rakes and other agricultural implements and machinery, and also handles carriages and sleighs.

One would suppose that with the different pursuits which we have named that Mr. Bond is engaged in his time must be pretty well taken up--and it is--but in addition to all this he owns and works a good-sized farm, located about a mile west of the village, to say nothing about the livery business which he conducts in connection with the hotel. 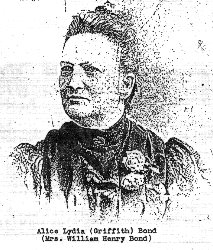 In politics Mr. Bons is a democrat, and although the town of Danby is safely republican, he has held many of the different town offices. He was postmaster of the village during both of President Cleveland's terms, and as a business man and in Masonic and Grand Army circles he is well and favorably known. Although deprived of many of the advantages for gaining an education that is provided the average youth in the present day--and of his own boyhood days, for that matter--Mr. Bond has managed to acquire a very good education, the most of it being gained while assisting his brother at the depot and attending the village school, although the Captain says he was then more proficient in baseball than in his studies. He takes much interest in educational matters, and has been often instrumental in causing capable teachers to be secured for the district schools of the village and town.

In 1865 he married Alice L., daughter of H. P. and Elsie Kelly Griffith, and the union has been blessed by three boys and one girl, all living at the present time. The elder son, Perry, is now conducting a general store at Mechanicsville, Vt.; Henry is traveling for the wholesale grocery firm of K. D. Keyes & Co., Rutland; Betsey is the estimable wife of Mr. Daniel Risdon, Jr., manager of the store of S. L. Griffith & Co., and George, the youngest son, is doing a very successful ticket brokerage business in Bennington. Those boys were all brought up in the hotel and gained their business training there, commencing quite young, and the success they have since met with in business affairs indicates that their early training in that respect could not have been far wrong.

Captain Bond's life has certainly been a most active one, and his is still in the "harness." The picture we show of him is an excellent one, and it is with pleasure that we give it a place in the MIRROR's photograph gallery of Danby's respected citizens.