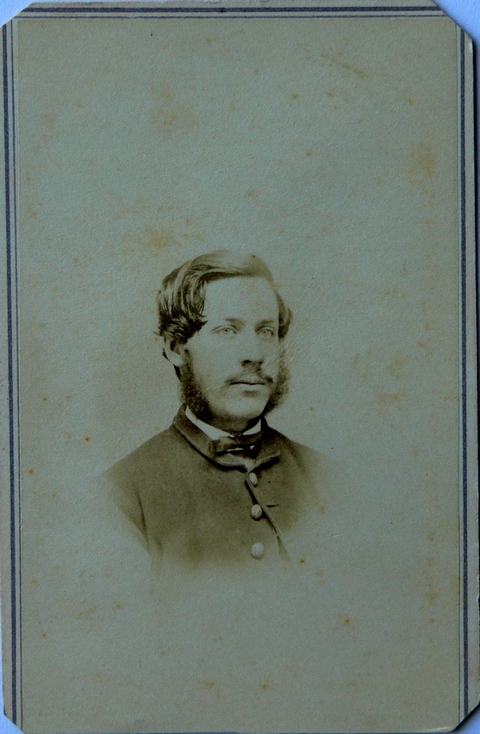 A letter which went astray on a Virginia battleship [sic] over 46 years ago has just been sent to the person for whom it was intended.

Maj Seymour H. Wood of St. Albans, Vt., who served in the 1st Vermont cavalry in the Civil war, has mailed to Mrs. Mildred Mitchell of Northfolk [sic], Va., a letter taken by Henry C. Pomeroy of St. Albans, a soldier in the 1st Vermont, from the knapsack of a confederate soldier, apparently dead, when the Vermonters made a charge on the confederate works at Fisher's Hill, Va., September 22, 1864. The writer was P. V. Harris of Co. A., 42d (or 12th the address not being perfectly legible) Virginia volunteer infantry, Terry's brigade, Gordon's division, Breckenridge's corps. As the letter is dated September 22, 1864, it is evident that it was written the very day on which the soldier was killed on the field of battle. It is addressed to Miss Millie Snead, Lynchburg, Va., now Mrs. Mitchell, and to it is affixed a confederate stamp. Mrs. Mitchell, who is a widow, is now in charge of the linen room of the Norfolk Protestant hospital.

Pomeroy lost the letter shortly after the war, but a few years ago he found it in his father's old family Bible. Five years ago he gave it to Major Wood to be placed in a collection of relics of the Civil war which the local Grand Army Post has in its hall. Recently, however Maj Wood began a correspondence which resulted in the letter being sent to the woman to whom it was written.

Major Seymour Henry Wood, 86, Civil war veteran and nationally known in G.A.R. circles, who came to this city 10 years ago to make his home, died this morning at 4 o'clock at his home, 739 Seventh street north, following a brief illness caused from heart disease.

Coming to this city from St. Albans, Vt., Major Wood was past department commander of the Vermont post of Company C, First Vermont infantry, and of Company L, First Vermont Cavalry. He was a prominent member of the local Grand Army post, in which he had held office.

Born April 19, 1841 in Swanton, Vt., Major Wood later moved to St. Albans, where he enlisted at the outbreak of the Civil war in the First Vermont infantry. After three months service in this branch he enlisted in the cavalry. He served four years during the war and was appointed major on the governor's staff in Vermont.

Following his retirement from the army, Major Wood was stationed in St. Albans in the United States customs service. Later he wrote a history of the Vermont Volunteers and their experiences during the Civil war.

Retaining the full use of his faculties in spite of his age, Major Wood was active up to the time of his sudden illness Tuesday. He had been married 62 years, his widow, Mrs. Cora Alluna Wood, survives him. Three nieces in Vermont and one nephew in Washington, D.C., also survive. He was a member of the United Liberal church here, and a Mason.

Funeral arrangements will be announced later by Walters' Funeral home.